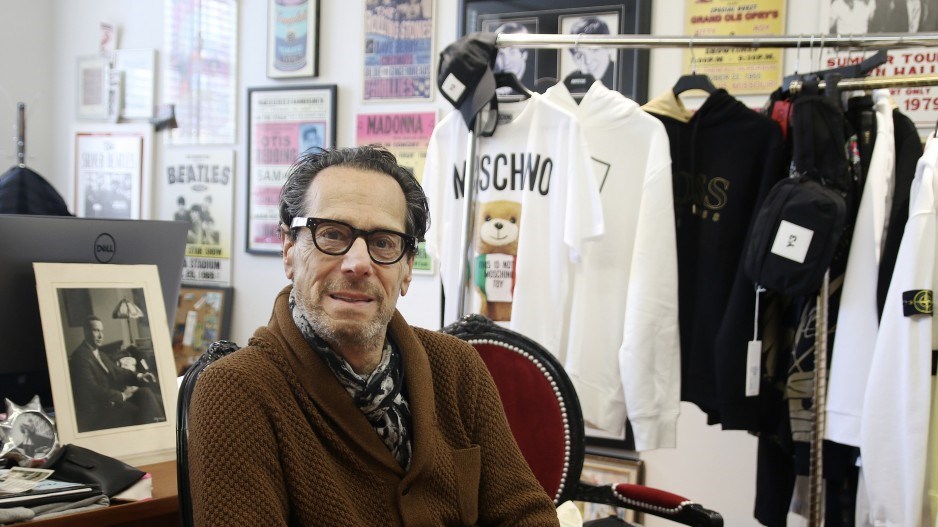 His three-store, 37-year-old retailer operates stores in Metro Vancouver, at Coquitlam Centre, Metropolis at Metrotown, in Burnaby, and at Guildford Town Centre, in Surrey.

It reached its peak of success in the 1990s, when it had six stores, including Vancouver locations on Robson Street, and the initial one, at Oakridge Centre. Other stores at the time were in Richmond, Victoria, Burnaby and Surrey.

Goldman closed his high-profile, 31-year-old store on Robson Street in 2018, in part because its $45,000 per month in rent made it a challenge to turn a profit. He immediately replaced that store with the one in Coquitlam.

He closed his Boys'Co. store at Oakridge just before the COVID-19 pandemic descended.

"We might close one store before then, which will leave us two. It's just a function of our landlord working out a replacement tenant. The third of the three stores may remain open for another month, or two, for a final liquidation, if necessary."

Goldman said that earlier this week he had one-on-one meetings with each of his approximately 40 employees to discuss his plans. He offered some of them bonuses to stay with the company until its official last day, and all of those who were offered those bonuses accepted, he said.

He called some moments in the past few weeks "emotional," as he was alerting suppliers of his decision to close the business, and many of them had become friends through the decades.

Goldman, 71, became a partner in his father's business in 1973, and at one point had 14 stores in five brands.

Though the years, the family operated seven brands, including Murray Goldman, Goldman and Son, Boys'Co., Bus Stop, Magnet, The Ivy Room and The Clothing Market.

His son, 44-year-old Sammy Goldman, has worked with him for 23 years. The two plan to keep working together in the family's other business, Goldman Investments Ltd.

"I don't think I'll ever retire," Goldman said. "I enjoy working with my son. I enjoy keeping busy."

Goldman told BIV in February that he was open to selling the business. On June 3, he said that he had started planning to shut down the business even before the pandemic ravaged the retail sector. The pandemic, however, accelerated his decision to liquidate his venture, he said.

Goldman remains open to selling intellectual property from the business, such as his in-house brands.

Retail analyst and Retail Insider Media owner Craig Patterson said that he was "sad" to hear that Boys' Co. is closing.

Patterson said he remembers being a fashion-conscious teenager, who bought Boys'Co. T-shirts and other clothing.

"It's a tough time for menswear retail in Canada – particularly multi-brand menswear that's higher end," he said. "There's been a lot of competition."

Another trend is that global fashion houses that may have historically sold products wholesale, to third-party, multi-brand retailers, are now opening self-branded boutiques, he added.

Without having a single Vancouver store, the brand became more suburban, and that may have lessened the brand's desirability for some shoppers, he said.

The rise of e-commerce may have also hurt the company.

"People can buy from retailers that are not just in Vancouver, or the Lower Mainland," said Patterson. "They can buy from anywhere in Canada, or even Internationally."

After nearly a quarter-century, a popular Gastown gastropub is packing up and moving to a new location
Mar 24, 2021 9:46 AM
Comments