Loui Eriksson has been on a personal hot streak ever since Canucks head coach Travis Green made the decision to put him on Bo Horvat’s line. Horvat has scored 16 points in 14 games since Eriksson joined his line, and while it’s fun to let the legend of Loui live on, you have to give most of the credit to Horvat himself, not so much Eriksson having a catalytic effect on the line.

Although Eriksson hasn’t had a huge impact on the Canucks this season, he is known for doing the little things well.

During the 2018-19 season, when fans were wondering why Eriksson was playing with Elias Pettersson, Canucks head coach Travis Green defended Eriksson by talking about the details and subtle things he did on the ice. The late, great Jason Botchford famously gave Eriksson the nickname Little Things Loui shortly thereafter.

1 | His defensive game. You have to give him credit, Eriksson is responsible away from the puck, and isn’t a defensive liability when he’s out on the ice.

“He might not be the flashiest guy, but he makes the right play all the time and he's really good defensively,” said Bo Horvat. “He's always on the right side of the puck. When you need to, you can put him out in any key situation.”

2 | Shut down top lines. Eriksson faces some tough matchups as he’s now in less of an offensive role than he was used to before. He’s face a steady diet of first-line forwards like Connor McDavid, Leon Draisaitl, Tomas Hertl, Anze Kopitar, Patrick Kane, and Taylor Hall, but he has the fourth-lowest rate of scoring chances against behind the top line of Brock Boeser, Elias Pettersson, and J.T. Miller, who get softer matchups.

It may not be worth $6 million dollars, but this certainly is a little thing that Loui does well.

3 | Secured victories for his team late. As I chronicled in my debut article for PITB, Eriksson has been deployed late in games when the Canucks are protecting a lead. He hasn’t been on the ice for a single goal against when defending against a team that has pulled their goaltender for the extra attacker.

4 | Played the role of Team Dad. Natalie Hoy wrote an exceptionally fun read about how Chris Tanev has taken on the role of Canucks team dad; but before Tanev, Eriksson played the role. He and his wife welcomed then-rookie Elias Pettersson into their home and allowed the young rookie to spend Christmas with their family.

5 | Scores empty net goals. If Eriksson could just imagine that the opponent’s nets were always empty, we may see him pot 30+ goals once again. When the goalie is pulled, Eriksson seems to skate harder, and make smart plays with the puck.

6 | He’s a huge source of memes on r/Canucks. I’m not an active poster or commenter on the Canucks subreddit, but I check it out whenever I need a good laugh. The majority of the funniest memes found on this subreddit revolve around Eriksson. 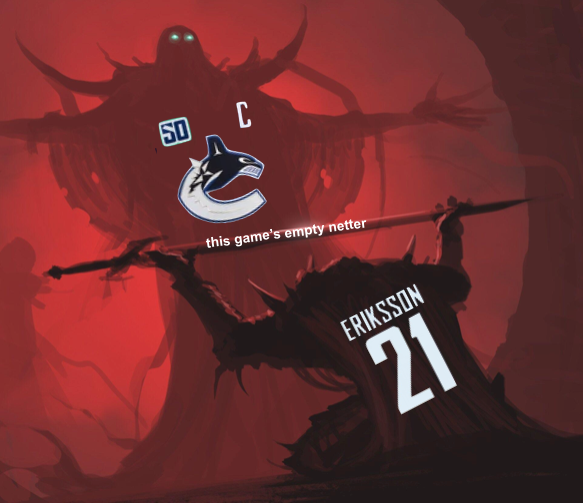 7 | Played on virtually every line. It’s convenient to have a player who can play on any line, and while this is certainly a little thing, Eriksson’s ability to play anywhere from the Canucks’ top 6 to the fourth line is often understated.

8 | Broke (but not really) a stick now owned by fellow Canucks writer Chris Faber. A couple of weeks back, my partner on the Canucks Conversation podcast and I went to Rogers Arena for the equipment sale. The visitor’s dressing room was littered with game used sticks, helmets, goalie equipment, and much more. We picked up some cool items for our Patreon giveaways, but Chris’ attention was immediately grabbed by the stick rack labeled “broken sticks: $25”.

This included severed sticks from Elias Pettersson, Adam Gaudette, and many more with no blades, or shafts that had been snapped clean in two. Then, just sitting there, was a stick that had the slightest of chips on it. The name? "L. Eriksson." “I have to buy this,” said Chris. He did just that, and that little reminder of Little Things will now always live on in Chris’s house.

So @QuadreIli and I went down to Rogers arena this afternoon to find some stuff to giveaway to our patreon donors.

I found this game used Loui Eriksson stick and couldn't say no.

9 | Was part of one of the most dominant shifts in Sedin history. It will forever be debated amongst Canucks fans which Sedin shift in the offensive zone is their most dominant and therefore being worthy of being referred to as “The” shift. One of the best is the one featured in the latter half of this video:

That’s a minute-and-a-half of dominance, capped off by Erikssons providing the primary assist on Daniel Sedin’s goal: a big little thing.

10 | Is in great shape. Much like the Sedins, Eriksson is one of the most well-conditioned Canucks. You know who you’ll never see winded after a bag skate? Loui Eriksson.

11 | Can grow some absolutely legendary flow. Although he’s fairly clean cut now, there was a time during Eriksson’s Canucks tenure where he may have been in the running for nicest flowing hair on the team. 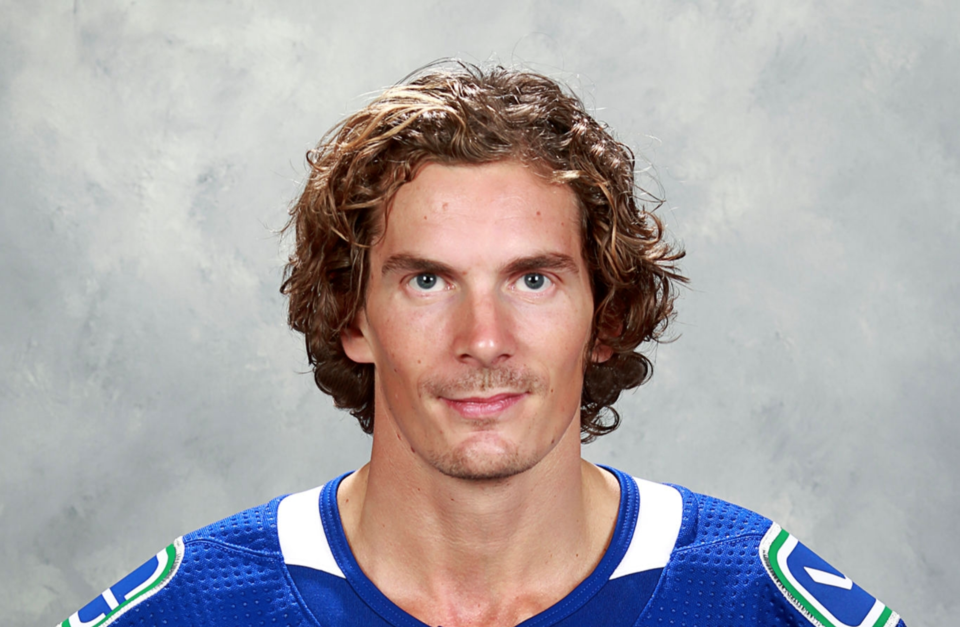 12 | Is good with his hands. “Loui Eriksson only had 11 goals last season, you can bet he’ll get more this year,” said John Garrett in the below video. That would have been a bad bet — Eriksson got 10 goals that season — but this one was pretty nice, as he bats the puck out of mid-air to himself with his glove. How many Canucks have scored goals like this? I have no idea, but Loui is one of them.

13 | His Canucks memorabilia makes a great gift! Valentine’s Day is coming up, so why not show that special someone that it’s the little things that matter most to you? You can find Eriksson signed pucks, photos and much more at fairly affordable prices online compared to other players making $6 million per year around the NHL.

14 | Goes to the front of the net. The saying “put the puck on net and good things will happen” is even truer when Eriksson is on the ice. Loui made a name for himself from picking up “garbage goals” in Boston and Dallas, and he always seems to be in the right place waiting for a potential rebound.

15 | Has solidified the“Insurance Line”. I believe it was Brendan Batchelor who originally gave the line of Tanner Pearson, Bo Horvat, and Loui Eriksson the name of the Insurance Line due to them constantly being deployed when the opponent’s net is empty while the Canucks are protecting a tight lead. Without Loui, is there even an Insurance Line?

16 | Keeps quiet on the plane. Nobody likes loud passengers on a plane, and thankfully, the Canucks won’t have to worry about a peep coming out of Eriksson, because he’s usually asleep.

17 | He’s “The Closer.” Coach Green admitted that when the opposing net’s empty, he wants the puck to land on Loui’s stick. Whether he’s scoring the goal himself or setting it up, Eriksson knows how to close out games. He’s basically the Mariano Rivera of hockey.

18 | Pushes puck possession in the right direction whenever he’s on the ice. His isolated impact heat map from Hockey Viz shows how shots are far more dangerous for the Canucks and far less dangerous against whenever he’s on the ice. His impact is actually huge, but it’s so subtle on a shift-by-shift basis that we can still call it a little thing. 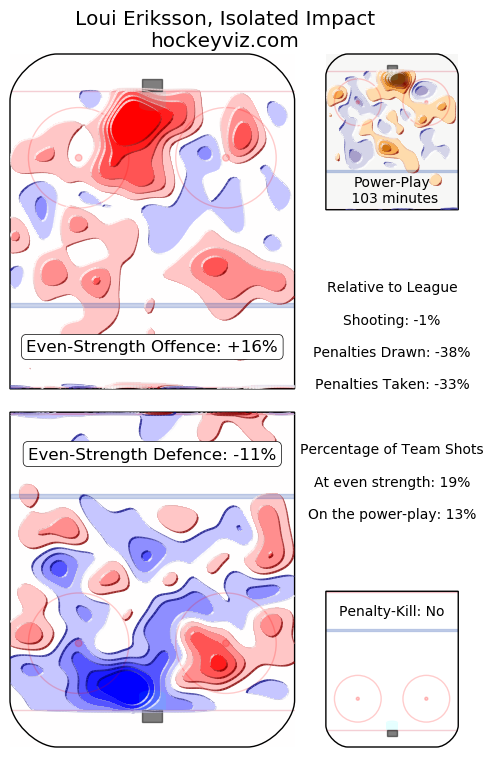 19 | He’s got one of the better moustaches on the Canucks. When November rolls around, Eriksson has been known to grow out a pretty nice looking lip warmer. It’s no Erik Gudbranson handlebars level, but it’s a good stache nonetheless.

20 | He made Travis Green laugh. Okay, really it was The Athletic’s Thomas Drance who made Green laugh, but that’s not something we saw from Green often in a press conference. Drance asked Green about the energy in the building when the Horvat line comes out while the Canucks are protecting a lead late, and with a big smile and a laugh, Green said,“I’m hoping Loui gets the puck.” It’s a little thing, but giving your coach the joy of laughter is more important than you think.

Hear from Coach Green after the #Canucks defeat the Blues at @RogersArena. https://t.co/RlIQ1hUnjJ

21 | He’s kept a positive attitude. The memes are fun and all, and it’s fun to occasionally poke fun at Eriksson, but you have to give him credit for not allowing himself to get discouraged and continuing to work hard. At one point, it looked like Eriksson’s time with the Canucks might have been done for good, but he got a taste of life in the press box and didn’t like it, and has been doing everything in his power to make a last-ditch attempt at getting top-6 minutes. At the end of the day, you have to respect him for that.

“Of course, it’s not an easy situation,” said Eriksson earlier in the season when he was a frequent healthy scratch. “But you have to think positive. When you get the chance, you have to go out there and do what you’re good at. That’s all I’m going to focus on: go out there and try to help the team as much as I can in the role I will play.”