Provincial health authorities are being a stickler for the rules with the NHL, which could prevent the Canucks from playing in Vancouver.
Dec 21, 2020 3:28 PM By: Daniel Wagner 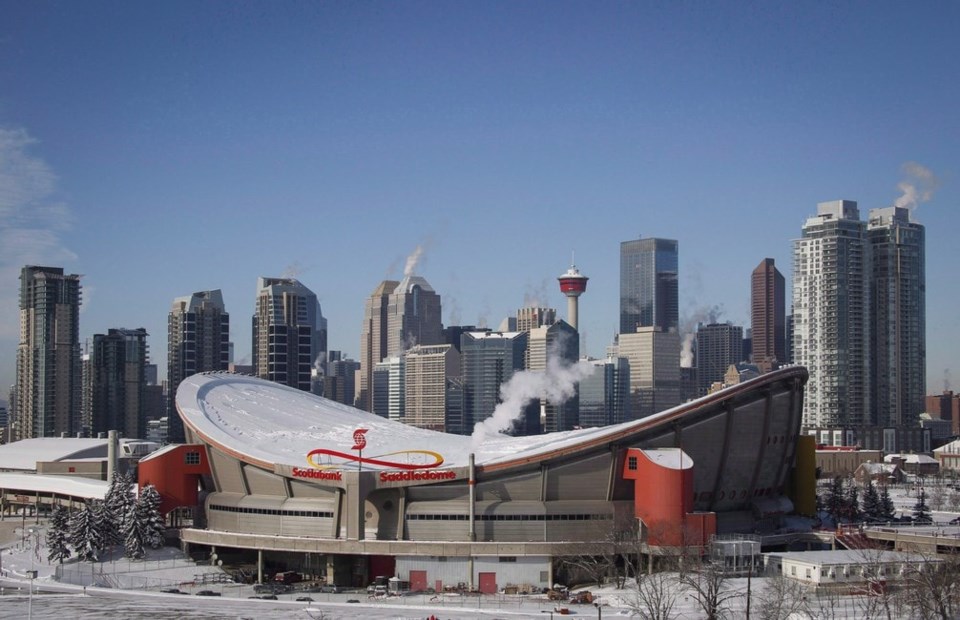 The Saddledome in Calgary: could it be the temporary home of the Canucks in 2021?Jeff McIntosh / CP

The 2020-21 NHL season is officially happening, so hockey fans can rejoice and cry out, “O frabjous day! Callooh! Callay!”

There’s just one hitch: the Vancouver Canucks still don’t know where they’ll be playing. The NHL continues to negotiate with provincial health authorities across Canada, but it appears the last holdout is Dr. Bonnie Henry and the province of British Columbia. While other provinces seem satisfied with the NHL’s plan, B.C. is not on board with allowing teams to travel into the province.

League source says at this point the BC government remains unwilling to allow NHL teams to travel into the province for games. That may change as discussions continue, but remains their position as of now, even with the added safety protocols outlined today by @frank_seravalli

That’s a slight problem because you generally need another team in the province in order to play a game. This is not a work-from-home situation, unless the NHL wants to substitute Call of Duty: Warzone tournaments for games, in which case I like the Canucks chances of making the playoffs with Adam Gaudette leading the way.

In order for the NHL’s all-Canadian division to work, then, the Canucks might have to play somewhere else, at least to start the season. That might not even have a major impact on Canucks fans, who likely won’t be allowed into Rogers Arena this season even if the Canucks play in Vancouver.

It will be a problem for the players, however. Leaving their families behind in Vancouver for an entire season seems untenable. Canucks captain Bo Horvat talked about the expected mental strain of the quarantined bubble after the playoffs.

“It was tougher than I thought, mentally, being away from your family and not knowing when you were going to see them,” he said. “Would I do it again? I don’t know.”

Perhaps the players’ families could move with them, but where would they stay? A hotel for months? Temporarily rent an apartment? The logistics could be nightmarish.

At the same time, it’s respectable that B.C.’s health authorities are prioritizing health and safety. One of the notable outbreaks of COVID-19 in B.C. came from a hockey team that defied health orders to play in Alberta and spread the virus upon their return. That’s a situation they don’t want to see repeated multiple times throughout an NHL season.

There’s still a possibility that the Canucks play in Vancouver. The NHL still has over three weeks to make their case to B.C. health authorities and one of the encouraging aspects of the reports is that the hangup doesn’t appear to be playing the games themselves. That seems to mean that the Canucks could play games in Vancouver, as long as they can get teams into the province.

Perhaps this could be accomplished via skullduggery, sneaking teams into the province disguised as Girl Scout troops or through some sort of secret tunnel, but it will be awfully hard to pretend that they haven’t snuck a team into the province when the games are televised.

Seriously, the primary issue is likely ensuring that teams travelling into the province limit their contact with the rest of Vancouver. That’s tough, obviously, as Vancouver is awesome. If the NHL can make enough tweaks to their safety plans to satisfy provincial health authorities, the Canucks’ home games could still be in Vancouver.

The Calgary Flames have already taken Chris Tanev, Jacob Markstrom, Josh Leivo, and Louis Domingue, and their Reverse Retro jersey looks alarmingly like the Canucks’ flying skate jersey. We should have known that Calgary wouldn’t be satisfied with just four free agents and a jersey: they want the entire team.

There would be a benefit to playing in Calgary, however: their games would be in a timezone only one hour apart from B.C., which isn’t the case for every option on this list.

Here’s an idea: why not create a whole host of new Canucks fans by planting the team in one of the most hockey-rabid places in the entire world?

Quebec City has been clamouring for an NHL team ever since the Nordiques moved to Colorado and became the Avalanche, then rudely won the Stanley Cup in their first season there. Their bids for expansion have been repeatedly shelved, but they have a new arena that opened in 2015, the largest arena in Canada that doesn’t host an NHL team.

There’s the issue that they’d be playing in the Eastern time zone, so games would be at an awkward hour, but there’d be an appeal to ownership: Quebec might allow fans into arenas, providing some ticket revenue, and you can just imagine how well Quebec Canucks merchandise would sell.

The idea of the Canucks playing home games in Ontario is repugnant to me. Moving on.

Saskatoon has been close to having an NHL team in the past. In fact, there was an agreement at one point for the St. Louis Blues to move to Saskatoon and become the Saskatoon Blues in the 1983-84 season, but the NHL vetoed the sale.

In the 2009-10 season, there was a plan in place for the then-Phoenix Coyotes to play some of their home games in Saskatoon. Is it so crazy to think that a similar arrangement could be made for the Canucks, starting the season in Saskatchewan?

The time zone difference wouldn’t be as bad as in Quebec or Ontario, and there are a lot of diehard hockey fans in Saskatoon that don’t have a hometown NHL team for which to cheer. Gaining new, lifelong fans of the Canucks would be easier than in Quebec.

Okay, hear me out. What if the Canucks bought an aircraft carrier that was large enough to build a hockey rink on it, floated it out into international waters? Everyone knows from movies and TV shows that laws don’t apply in international waters, so there’s no need to quarantine.

Pro: Since it’s an aircraft carrier, opposing teams can just fly straight to the rink and land right beside it.

That’s the only con.

One of the coolest discoveries of the last few years is that there’s ice on the moon. Not only does that provide intriguing possibilities for lunar exploration, where there’s ice, there can be ice hockey.

Travel to and from the moon might be an issue, as will the lower gravity and lack of atmosphere — the rink will have to be in a literal bubble — but those are just minor logistical issues compared to the awesomeness of playing hockey on the moon.

8 | The Theatre of the Mind

There’s only one thing more powerful than a virus: the human imagination.

There are two routes to go here: virtual and tabletop. For the virtual method, we would need some sort of powerful virtual reality machine, allowing all of the players from opposing teams to enter into a virtual hockey rink, like the Matrix without killer agents running around murdering people.

Alternatively, the players could each roll up their stats, build their characters, and take to the tabletop. Each player will need a set of dice, most importantly a 20-sided die aka. a d20 in order to adjudicate successes and failures on the ice. Bonuses can be based on past statistics, as well as any increases to skills based on their offseason training or age-based penalties.

The biggest challenge will be coming up with a full d20 system to run a full tabletop pen-and-paper hockey game. I’m thinking rules-lite and really focus on players using their imaginations to make it come to life.