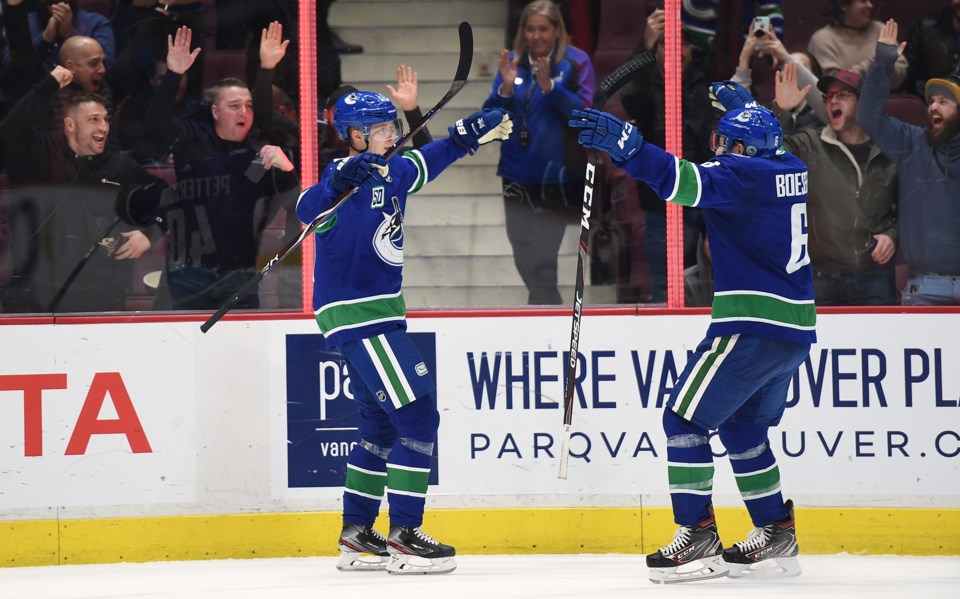 Fans won't be cheering on any goals from Elias Pettersson and Brock Boeser in person for a while. photo: Dan Toulgoet / Glacier Media

It might be a long time before hockey fans can go see a Canucks game in person.

COVID-19 restrictions have some NHL teams reaching for creative solutions. According to a report from Sportsnet’s Elliotte Friedman, four teams — the Anaheim Ducks, Boston Bruins, Los Angeles Kings, and Pittsburgh Penguins — are looking to sidestep restrictions on attendance at indoor sporting events by heading outdoors, where fans can be more easily distanced from each other in open-air stadiums.

According to Canucks’ COO Trent Carroll, however, playing games at BC Place isn’t in the cards for the Canucks: “We are not currently exploring that option here in Vancouver and are focusing on making sure we are operationally ready at Rogers Arena.”

That means the Canucks could end up playing the entire 2020-21 season in front of empty seats.

Meetings between the NHL and NHLPA this past week solidified some of the plans for the 2020-21 season. The league is likely to push back the January 1st start date to January 13th for a 56-game schedule, but the question of revenue remains relevant, particularly for teams that won’t be able to have fans in their buildings.

Whether teams will be allowed to have fans in seats in the coming season will likely depend on the COVID-19 restrictions of their province or state. For example, according to current guidelines in place in Texas, the Dallas Stars could be allowed to have spectators in their arena up to 50% capacity. That means the Stars might have upwards of 9,000 fans at their home games, despite Texas averaging over 10,000 new COVID-19 cases per day for nearly a month.

That stands in stark contrast to the tighter restrictions from B.C.’s health authorities. Rather than the laissez-faire approach of some states, B.C. and other Canadian provinces have severely limited social gatherings.

“We are not anticipating fans will be permitted when games begin,” said Carroll, but emphasized that they will be in compliance with "local health guidelines" whether or not fans are allowed.

Those “local health guidelines” are more than just guidelines right now. Current restrictions from B.C.’s provincial health officer mean all indoor and outdoor sports are verboten. Dr. Bonnie Henry cited the example of an old-timers’ hockey team that defied recommendations to limit travel, taking a trip to Alberta that caused an outbreak in their community upon their return.

Professional athletes are exempt from the province’s ban on sports, so the Canucks should still be able to run their training camp, but the order also suspended all events and social gatherings, which would include fans gathering at Canucks games at Rogers Arena.

While the suspension could be lifted before the start of the season, events and social gatherings are likely to still be tightly restricted. The province’s “Restart Plan” doesn’t include attendance at professional sporting events until Phase 4, which requires one of “wide vaccination,” “community immunity,” or “broad successful treatments.” None of those factors is likely to be met by mid-January. In fact, wide vaccination is unlikely to occur in B.C. until the end of the summer.

Is it any wonder, then, that the Canucks have severely cut back their business operations from a staff of 200 people to around 40? With no fans in the arena, business won’t be booming. Still, the Canucks have to prepare for every eventuality.

“We are working closely with the NHL and local health authorities on plans to potentially host training camp and games at Rogers Arena this coming season,” said Carroll. “We are in the process of reviewing a variety of scenarios and are remaining flexible given how fluid the pandemic conditions continue to be both here in B.C. and in all NHL markets.”

Unless someone can socially distance a metaphorical rabbit from its hat, fans will likely have to wait until the 2021-22 season to cheer on the Canucks in person again.