“Regardless of what they accomplished on the ice — and we can speak about that for days — I respect them even more as people and how they treated people."
Jul 14, 2021 5:08 PM By: Daniel Wagner 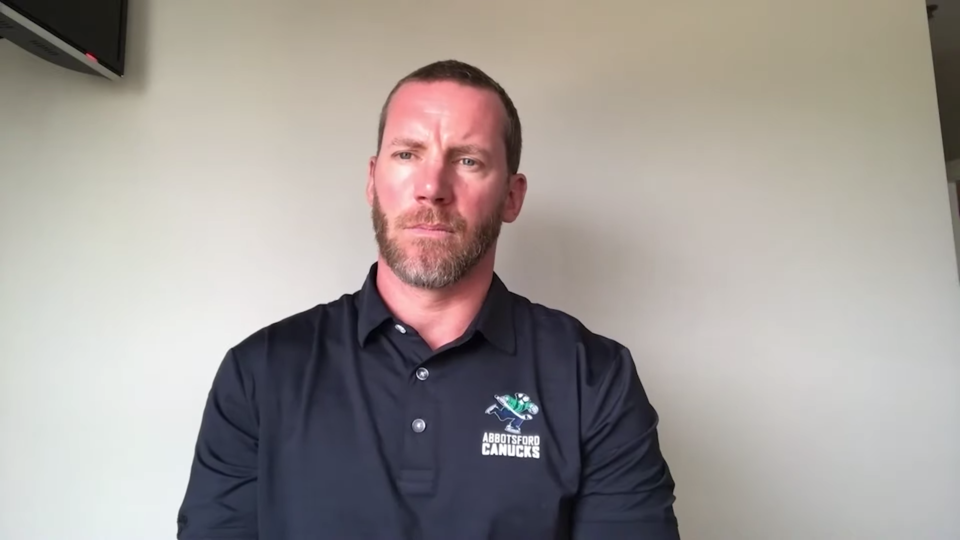 Abbotsford Canucks GM Ryan Johnson takes questions from the media after the introduction of the team name, logo, and jersey.Canucks

As a hockey player, Ryan Johnson was adept at getting in front of pucks, making an NHL career out of blocking shots, as well as winning faceoffs and killing penalties.

As a hockey executive, it turns out Johnson is pretty good at getting in front of microphones too. The former Canuck held court digitally following the announcement of the name of the team’s new AHL affiliate, the Abbotsford Canucks, and gave detailed, thoughtful answers to every question posed to him by the media.

The past few weeks have been a whirlwind of activity for Johnson and the newly-dubbed Abbotsford Canucks.

“We've got the front office decisions to make, we've got to basically reconfigure a building a little bit from a business standpoint and operationally, from the dressing room and all these things. There's been so many moving parts,” said Johnson. “We’ve got a hockey team to build at the same time — AHL free agency starting on July 1, the draft and expansion, and NHL free agency starting on the 28th.”

The late decision to leave Utica and come to Abbotsford has added an unusual offseason to what was already an unusual season with the COVID-19 pandemic.

“Usually there's a little bit of downtime at the end of the season but obviously transitioning a whole organization from upstate New York out to the Fraser Valley creates its challenges,” said Johnson. “A major part of that was establishing what of our staff was going to be able to make that move and who couldn't and then a hiring process from there."

Johnson said they tried to keep as many staff on as they could but many couldn’t make the move cross-continent to Abbotsford. That meant finding the right people to replace them who could continue growing the culture that he wants to see on the Canucks’ AHL affiliate.

"They're friends, people that I highly respect."

Fortunately, Johnson got two of the best possible people available to him to help build that culture: Daniel and Henrik Sedin.

“I was teammates with them from 2008 to 2010, they're friends, people that I highly respect,” said Johnson. “Regardless of what they accomplished on the ice — and we can speak about that for days — I respect them even more as people and how they treated people.

“I say all the time, it's my responsibility to create a culture and environment and resources that help everybody, not just our players but our staff, become better at what they do and these are two of the greatest resources that I could ask for.”

When the Canucks announced the hiring of the Sedins as Special Advisors to the GM, it was said they would “work collaboratively with Abbotsford’s AHL staff and coaches.” Johnson expanded on what that might look like.

“We've talked about how their involvement will obviously be coming into practice and being around our coaching staff, being available to grab a player, to talk to a player, to watch games, to evaluate players, evaluate prospects, and so I'm going to welcome their opinions on anything and everything,” said Johnson. “I'm excited just to get back in a room with them, talking hockey, talking people, talking about a process and culture that they know is very important to me.

“For me this is a home run and I couldn't be more fortunate to have them on board.”

"We can hold players in Vancouver accountable."

Along with all of the challenges of moving to Abbotsford, Johnson also has to build a team. Fortunately, he says he’s been able to use the team’s location itself as a draw for free agents.

“When you get Western Canadians or players that have been brought up in B.C., they have a connection to the Canuck organization,” said Johnson. “They were at one point, I'm sure, fans, and always wanted to be drafted or play for [the Canucks].”

That suggests that the Abbotsford Canucks roster could have a little local flavour, which could certainly help endear the team to the local hockey community. Johnson also talked about how making a connection with minor hockey in the area is key to building a fanbase that isn’t just a “flash in the pan.”

Of course, Abbotsford also holds another key benefit for attracting players: its proximity to Vancouver.

“Knowing that when your farm team is 45 minutes to an hour down the road, there's opportunity,” said Johnson. “It's great for us to be able to reward somebody that eventually has kicked the door down, that we don't have to worry about how are we going to get them there? Is he going to be available to play tomorrow night, and is he even going to be capable after spending 10 hours on an airplane?

“Those are things that now kind of are removed off the table and we can hold players in Vancouver accountable and reward players in Abbotsford that deserve the opportunity.”

Holding NHL players accountable was a repeated theme for Johnson on Wednesday, who talked extensively about wanting the organization to be stronger “below the line” in order to have more players pushing to make the Canucks from below. In an ideal situation, both the NHL and AHL teams would be winning organizations, with a clear path to the NHL for players brought into the AHL organization.

"Just seeing stats on paper, it doesn't always do it justice."

While Abbotsford hockey fans will certainly hope to see a winning team, a key draw for many fans will be the opportunity to see Canucks prospects in person. With the Utica Comets located hundreds of miles away and AHL streaming prohibitively expensive, the most that a Canucks fan could see of a prospect was a few highlight videos and some statistics online.

“I think for our fans to be able to see the daily progressions — the game-to-game progressions — they’ll be able to understand that putting up points or not putting up points in the American League isn't the be-all and end-all of the development process,” said Johnson. “There are some players that are maybe not as productive offensively in the American League, but you can see that they've got certain aspects to the game that you automatically know are going to translate into the NHL.”

"Maybe seeing highlights or just seeing stats on paper, it doesn't always do it justice," he added.

Fans will get a chance to see the development of these players for themselves starting in October, when the AHL season is set to begin.