After 20 games, the Canucks are worse than they were a year ago

The Canucks were supposed to be better than last year. They're not.

A quarter of the 2022-23 season is gone and the Vancouver Canucks are not doing so well.

By points percentage, the Canucks are sixth in the Pacific Division, 13th in the Western Conference, and 27th in the NHL. For a team whose head coach said missing the playoffs would be “a big disaster,” it’s been a pretty disastrous start that has some calling for the team to tear the roster down and rebuild.

There is a lingering question, however: are the Canucks as bad as their record would indicate?

The Canucks have shown that they have plenty of offensive firepower — their 3.50 goals per game is seventh in the NHL — and they’ve been able to get plenty of leads this season.

The primary issue has been defending those leads. If they can shore up their defensive game and turn more of those leads into wins as the season progresses, might they still be a playoff team?

Do the underlying numbers paint an optimistic picture?

One way to investigate this is to look at the Canucks’ underlying numbers. By 20 games, analytics like corsi (shot attempts for and against at 5-on-5) and expected goals (the probability of each shot attempt for and against to be a goal) have some predictive power for the rest of the season.

Do these numbers show that the Canucks are better than their record would indicate? Well, no. Not really.

Looking specifically at expected goals percentage at 5-on-5, the Canucks are 26th in the NHL — one spot off from where they currently sit in the NHL standings.

In fact, the Canucks’ underlying numbers after 20 games show that they’re as bad, if not worse, than they were at this time last year. 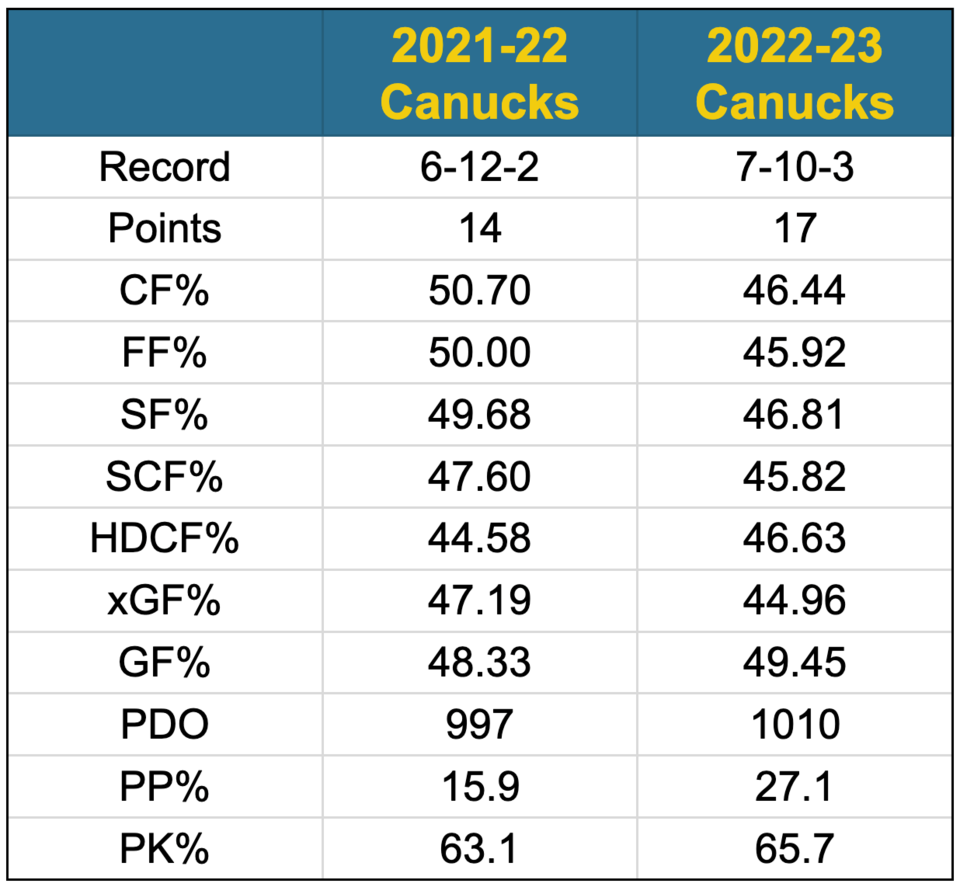 These statistics primarily come from Natural Stat Trick, as well as a few directly from the NHL.

The Canucks’ start last season was ugly, with the team sitting at 6-12-2 after twenty games. After five more games, in which the Canucks were 2-3-0, general manager Jim Benning and head coach Travis Green were fired.

In terms of their record, the Canucks are slightly ahead of where they were last season, with one more win and one more overtime loss giving them three more points. By the underlying numbers, however, the current Canucks are worse in almost every possible way.

Still, even with that in mind, the 2021-22 Canucks after 20 games were better than this season’s Canucks in almost every metric at 5-on-5 — corsi, fenwick (unblocked shot attempts for and against at 5-on-5), shots on goal, scoring chances, and expected goals. 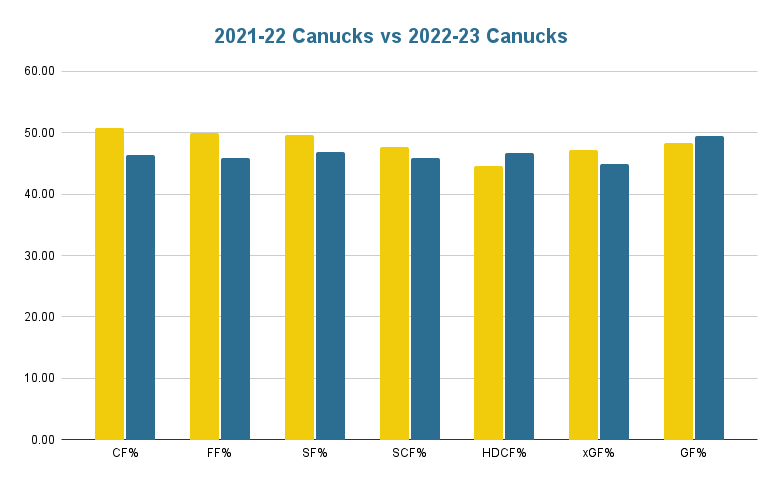 The above chart goes from 40% to 60%, as that represents the actual range of NHL teams this season in most of these metrics.

The Canucks’ goals-for percentage would be a lot worse if not for a 1.010 PDO, which adds together shooting percentage and save percentage as a proxy for luck.

This may sound surprising, but the Canucks’ goaltending has been pretty close to average at 5-on-5, but their 5-on-5 shooting percentage is second in the NHL at 9.57%.

In other words, while the Canucks might get better at defending leads in the near future, they might have a much tougher time getting those leads in the first place.

What the underlying numbers for last year’s Canucks do show, however, is that they were a bit better than their record indicated. They were a positive puck possession team at 5-on-5 that just needed to get to the inside with more consistency. Under a new head coach in Bruce Boudreau, they were able to do so and turned that into an impressive winning streak.

Improving on special teams also helped. After 20 games, both last year’s and this year’s Canucks are dreadful on the penalty kill but the current Canucks have thrived on the power play this season, with a 27.1% success rate that lands them in the top five in the NHL.

Last year, the Canucks were able to drastically improve on both the power play and penalty kill, playing a big role in their turnaround — a turnaround that still left them short of the playoffs after the giant hole they dug to start the season.

What’s next for the Canucks?

It seems clear that the Canucks are fundamentally flawed as currently constructed. In many ways, they are the same team as last season, a team that got both a general manager and a head coach fired.

Maybe the Canucks will be able to pull themselves out of this tailspin — they’ve won three of their last four games, including a potential statement win over the defending Stanley Cup Champions — but if they don’t, something will have to change.

The question is whether that will be the coaching staff, players, or overall philosophy — perhaps some combination of all three.