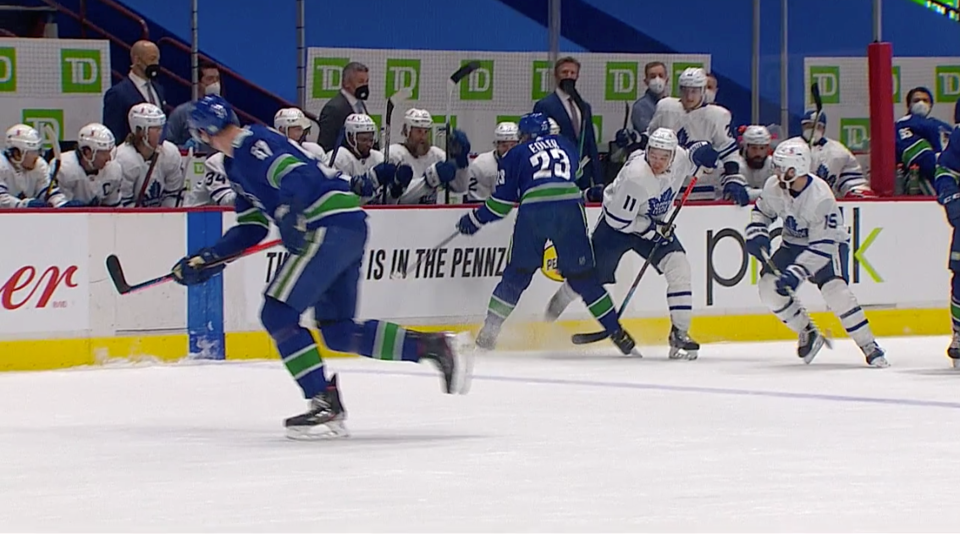 The Vancouver Canucks' Alex Edler was suspended two games for this knee-on-knee hit on the Toronto Maple Leafs' Zach Hyman.Sportsnet

For the Toronto Maple Leafs, Sunday night’s loss to the Vancouver Canucks might have been frustrating but the far bigger loss was when Zach Hyman left the game in the second period.

Hyman is a catalyst for the Leafs, a player that can be stuck on any line and make them better with his impeccable work ethic and versatile game. If he’s seriously injured and out for a significant length of time, that could be disastrous for the Leafs, who have their eyes set on Stanley Cup contention.

On Monday, Alex Edler was suspended two games for his knee-on-knee hit on Hyman that dropped him to the ice and knocked him out of the game.

After the ugly collision, there were some Canucks fans who tried to excuse Edler by suggesting that Hyman caused the collision himself by trying to dodge Edler’s check, as if players don’t try to avoid hits every single shift. No, there’s no excusing Edler on this one, although you can certainly point to some mitigating circumstances.

Edler was at the end of a three-minute shift and when players are tired, that’s when poor decisions tend to happen. The whole body tends to react a little more slowly and it’s easy to get beat by someone with fresher legs and more energy.

Sometimes when a player gets beat, they reach out with their arm and take a holding penalty or with their stick and take a hooking or slashing penalty. In this case, Edler had the worst possible reaction and reached out with his right leg and went knee-on-knee with Hyman.

It certainly doesn’t help that Edler was playing his first game back from a case of COVID-19 and was likely even more tired than he would usually be. Edler experienced symptoms that took a lot out of him according to an interview with SportsExpressen.

“The symptoms I got during the first three or four days felt like a common flu,” said Edler. “I had pain in my body and felt weak.”

Then things suddenly took a turn for the worse.

“On the eighth day I woke up with a fever and it stayed for three days,” he said. “I did not have a very high fever, but it was enough for me not to feel so good.”

Edler’s youngest daughter also tested positive and the two of them moved down to the basement to quarantine from the rest of their family. Edler also lost his sense of taste and smell, though he admitted that his symptoms were more mild than others on his team.

“Most people experienced the same fever I did,” he said. “Some had a higher fever, others lost their appetite completely. I also hear someone who had lung problems.”

When asked whether he and his teammates would be ready to play in Sunday’s game, Edler admitted, “No one will be in top form.”

Did being tired from dealing with COVID-19 play a role in him making a poor decision on the ice on Sunday? It’s hard to say. But Edler doesn’t have a history as a dirty player, even if Maple Leafs fans would like to suggest he does.

“Eddie’s obviously a hard player,” said Canucks head coach Travis Green. “He’s not a dirty player. He doesn’t try to hurt players ever and I don’t think that was the case there.”

In his 910-game NHL career, this was just the second 5-minute major for Edler and his first game misconduct. While he has been suspended by the NHL’s Department of Player Safety twice before, those two suspensions both happened in 2013, eight years ago.

Edler did have a previous kneeing incident, when he badly injured Eric Staal at the 2013 World Championships while playing with Sweden. Like his two suspensions, it was eight years ago.

It’s hard to paint a picture of Edler as a dirty player when the only supporting evidence is eight years old. It was certainly a dirty hit on Hyman and a deserved suspension but lots of players cross the line during a game without being subsequently deemed a dirty player.

"You never knee a person intentionally."

“It’s a reactionary, instinctual play that happens in the middle of a game that’s very fast because you think the guy’s going to get around you. You just instinctually sometimes stick out an appendage to try to slow him down. While that’s not making an excuse for Edler, because that is a knee and we all hope that Hyman’s okay, it’s not something that’s premeditated or intentional, just to put that into perspective for the fan.”