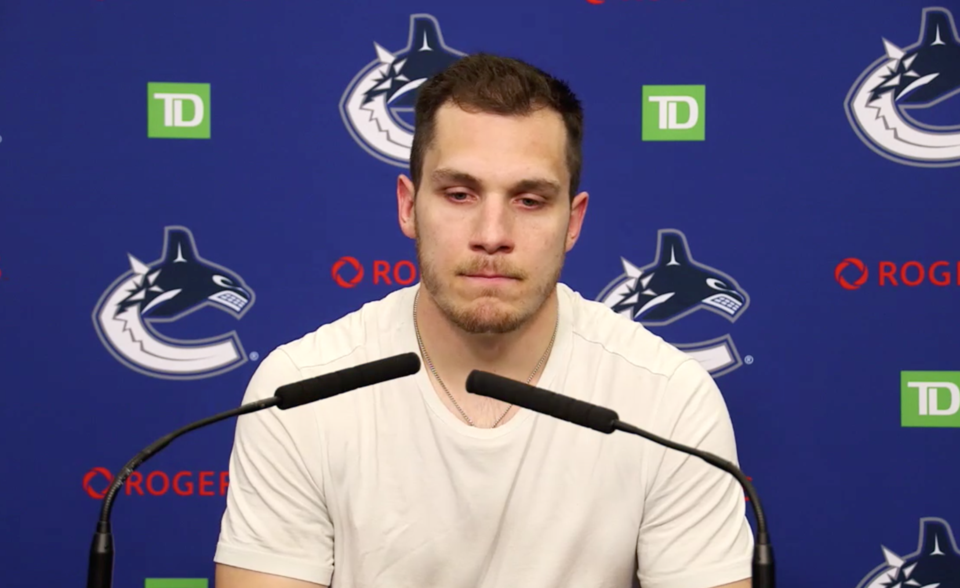 Bo Horvat looked a little worse for wear in his first media availability since testing positive for COVID-19.Canucks

On Thursday, Vancouver Canucks winger J.T. Miller expressed his concerns about the NHL’s proposed schedule for him and his teammates after their COVID-19 outbreak.

The NHL heard Miller’s concerns and made a major change: the Canucks will now have to play 19 games in 32 days.

Surely that extra day will make all the difference.

In truth, the delayed restart for the Canucks will help to a certain extent. Instead of playing on Friday after just one full practice, the Canucks will return on Sunday against the Toronto Maple Leafs after three practices and one game-day skate. That gives the players a little bit more time to test their conditioning and lung capacity post-COVID and get themselves up to something approaching gamespeed.

The NHL also moved several other games to accommodate this delayed restart. Monday’s game, for example, has been bumped back to Tuesday so that the Canucks won’t have to play on back-to-back nights right away.

The Canucks will still have five sets of games on back-to-back nights and their season will end with seven games in ten nights, a brutal stretch that will mostly take place after the playoffs have already begun for other divisions in the NHL.

"When it starts hitting families, it's really tough."

It’s a tough schedule for any team but even tougher for a team coming off the worst COVID-19 outbreak in the NHL.

“It was a tough three weeks,” said Canucks captain Bo Horvat on Friday. “When it starts hitting families, it’s really tough. It takes a lot out of you: you experience symptoms you’ve never really experienced in other flus and colds.”

Horvat explained that his symptoms were mild compared to some of his teammates but confirmed that his wife tested positive for the virus as well — “I think it hit her a little harder than it hit me,” he said.

“It’s definitely not going to be easy for us,” said Horvat. “A lot of guys are starting to feel better each and every day, which is a good sign. You know, you’re never going to know until you get into a game, so it’s gonna be hard to tell from practice.”

When asked about how he would respond to COVID deniers who claim the virus is just like the flu, Horvat had to laugh.

“I can’t stress enough to follow the protocols and wear your mask and wash your hands.”

Horvat was quick to credit Miller for speaking up the way he did.

“J.T.’s comments were needed,” he said. “It was really good for him to step up like that and he had his full teammates’ support, all of us are thinking the same thing. We definitely felt like we needed more time.”

When asked directly about the support he and his teammates have felt from the Canucks’ management and ownership, however, Horvat had an interesting response.

“The amount of support we got from the fans reaching out, our families, different people around the league was amazing,” said Horvat. “You need that kind of support to get through times like this and me personally, I felt really supported and people were always thinking about us and sharing that, so we’re really grateful for that.”

Perhaps Horvat misunderstood the question but it seems notable that he didn’t mention the Canucks organization at all when talking about the support he received while in isolation.

"Everything about this whole year...has been hard."

The Canucks did not release a statement in support of Miller or their players after Miller’s public comments on Thursday. Horvat discussed how the players talked to the NHLPA and the league but did the Canucks’ management team advocate for the health and safety of their players?

Canucks GM Jim Benning mentioned that the team physician, Dr. Bovard, was in communication with the NHLPA and the league but made no mention of any steps he or owner Francesco Aquilini took to ensure the schedule would not be too onerous on the team.

“We’re gonna have a lot of games in a short period of time but we started the season playing 19 games in 34 nights, so that wasn’t easy,” said Benniing. “Everything about this whole year and dealing with COVID and playing through a pandemic has been hard. We’ll just do our best and when we get our players back and they’re healthy, we’ll go from there.”