The NHL may need to follow the example of European leagues that have played with no fans or cancelled games.
Mar 10, 2020 4:13 PM By: Daniel Wagner 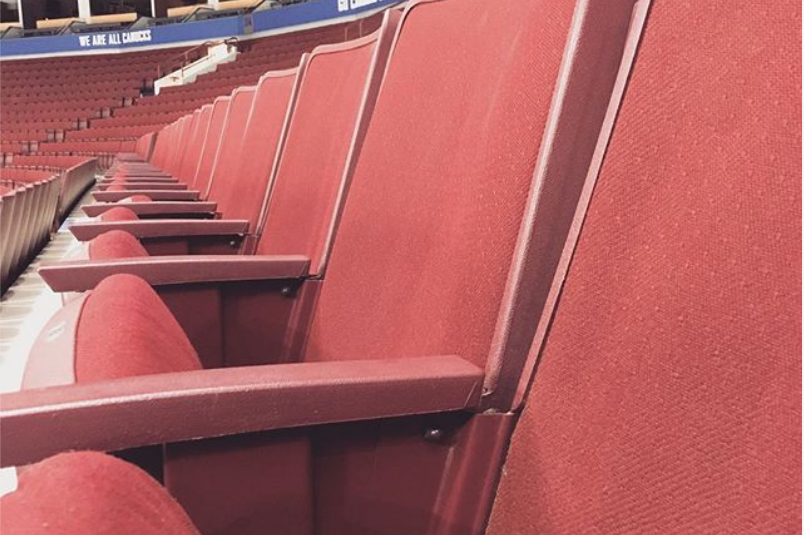 Home ice has been a significant advantage for the Vancouver Canucks this season. One of the elements of that home ice advantage, the raucous atmosphere inside Rogers Arena, could be in jeopardy.

Italy, which is the epicenter of Europe’s coronavirus outbreak, has imposed a nationwide lockdown. While the initial plan was for sporting events to continue without fans in attendance, they have now suspended all sporting events until, at minimum, April 3rd.

Germany has gone even farther with their top hockey league, the Deutsche Eishockey Liga. They’ve outright cancelled the remainder of the DEL season, citing a prohibition against gatherings of more than 1000 people. There will be no German champion this season.

The International Ice Hockey Federation (IIHF) has cancelled all March tournaments, including the Women’s World Hockey Championship. April’s Under-18 Championship, an essential event in the scouting calendar for NHL teams preparing for the draft, could be next to get cancelled.

These are understandable precautions to take to avoid the spread of the highly contagious disease, which is already bouncing from country to country and costing thousands of lives.

Professional leagues in North America, including the NHL, are not talking about cancelling games or seasons just yet, but the coronavirus has already had an impact on the NHL.

Santa Clara County, which encompasses San Jose, has placed a ban on public gatherings of more than 1000 people for the next three weeks, which will affect three San Jose Sharks home games. The Sharks are investigating the possibility of playing games at a neutral site, rescheduling the games, or playing them in an empty arena.

For now, the arenas remain full and loud in Vancouver and Canucks captain Bo Horvat is hoping they remain that way.

“That would be awful,” said Horvat about the possibility of playing in an empty arena. “As a player’s perspective, that’s who you do it for — you do it for your teammates, obviously, and your organization — but you obviously do it for your fans. To perform in front of an empty stadium would be terrible… There would be no life, it would be dead out there.”

Any large gathering of people is a potential vector for spreading the virus, but the NHL also wants to avoid the disease spreading among its players.

The NHL instituted a policy limiting access to locker rooms for the media and other non-essential staff. That led to awkward press conferences with players after the Canucks’ game on Sunday, where a distance of six feet was observed, though Tyler Toffoli smiled and said, “I like it,” when asked what he thought about the format.

The concerns are understandable. Consider the 2014-15 season, which saw an outbreak of mumps across multiple NHL teams. 24 players from five teams were diagnosed with mumps, as were two on-ice officials. A second mumps outbreak struck during the 2016-17 season, with players from the Canucks and Wild diagnosed and quarantined.

Like mumps, COVID-19 is a contagious virus that passes from person to person via close personal contact. In hockey, there’s a lot of close personal contact; the hard checks and puck battles are part of the appeal of the sport, and it’s easy to see how a viral infection could quickly spread through the NHL ranks.

While the coronavirus isn’t as deadly as the Spanish Flu, the NHL still needs to take precautions to avoid the spread of the disease. If the NHL needs to play in front of empty arenas and with the media barred from the locker room in order for the season to continue, so be it.

6 reasons why it would be disastrous for the Canucks to miss the playoffs this season
Mar 9, 2020 5:58 PM

PACIFIC POOL PARTY: What does the Canucks’ decline mean for Jacob Markstrom's contract negotiations?
Mar 10, 2020 10:11 AM