With a mandate to make the playoffs, Benning promises “aggressive” offseason 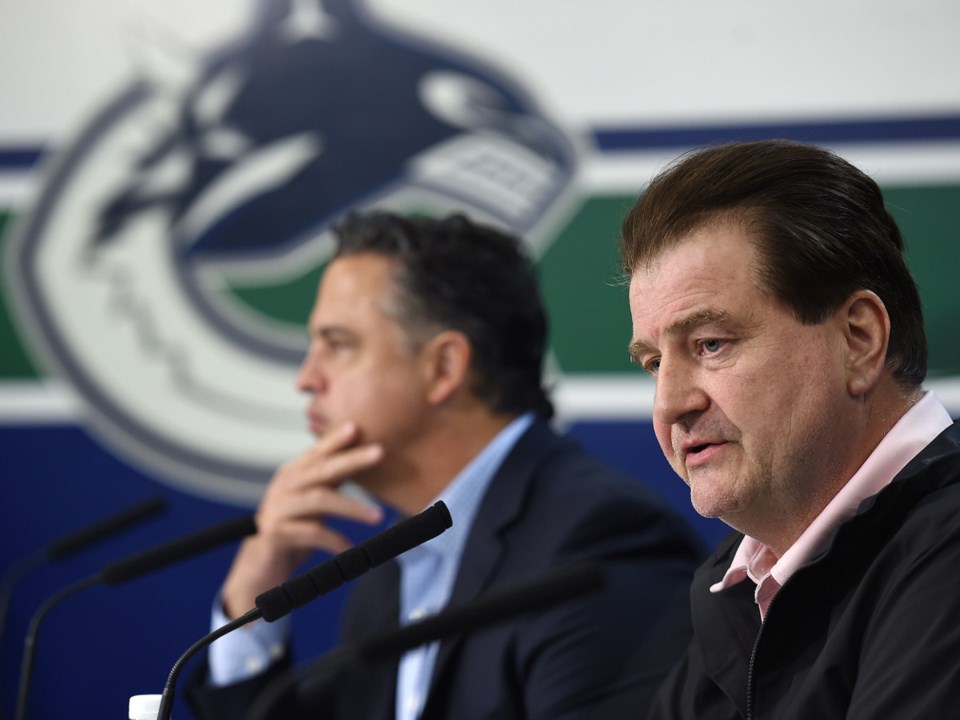 Jim Benning spoke to the media on Friday after the conclusion of the Vancouver Canucks season. (file photo)Dan Toulgoet / Glacier Media

At the very least, Jim Benning took some responsibility for the Canucks failures over the past season.

Two months ago, Benning was full of excuses for why the team was struggling — the short training camp, no preseason games, a difficult schedule, the flat salary cap — and short on accountability. He struck a different tone on Friday, his first media availability since the end of the season.

He read a prepared statement off the top of the Zoom call where he said it outright: “As for the results, no one is more disappointed than me; I’m accountable and responsible as a general manager.”

Later on, when discussing issues with depth, he talked about players that didn’t take the step forward that he had expected them to take, but even then he took responsibility: “That’s on me.”

Perhaps within that, there’s an acknowledgement that Benning and his management team are running out of excuses. The Canucks have now missed the playoffs in five of the last six years and few general managers in the NHL survive that kind of record.

"We need to make the playoffs next year"

For now, Benning lives on in his role as the Canucks’ GM but it’s hard to imagine him surviving another season of disappointment. It seems clear that the Canucks have a mandate for next season: make the playoffs. Period.

“We need to make the playoffs next year,” said Benning. “That's the goal right now as we go into the offseason, from ownership, to the general manager, and to the coach.”

While Benning used the plural pronoun, it also seems clear that he needs to make the playoffs. If fan resentment seems at a peak, there are still higher heights that could be reached if the team struggles next season as well. With fans likely to be back in Rogers Arena next season, it will be much harder to ignore the voices of upset fans.

To that end, Benning has one motto heading into the offseason: be aggressive, B-E aggressive.

The perils of an aggressive approach

In some ways, wanting to be aggressive is encouraging. One of the faults of the team last offseason is that they were too passive, allowing their own free agents to slip away. In the case of Tyler Toffoli, he has publicly stated that he and his agent never even received an offer from the Canucks.

That trade worked out for the Canucks, particularly since Miller immediately found a fit on the team’s top line with Elias Pettersson and Brock Boeser, but it could have backfired in spectacular fashion. Fans can only hope that similarly aggressive moves this offseason work out as well.

"Buyouts are going to be part of our strategy"

The challenge Benning faces this offseason is not a simple one. While contracts are coming off the books, much of this newly freed up cap space will be taken up by Elias Pettersson and Quinn Hughes. The team has just two experienced NHL defencemen under contract for next season and a bottom-six forward group in need of an overhaul.

Fixing it all will require Canucks owner Francesco Aquilini to open up his pocketbook.

“Ownership has given us the resources to do whatever we need to do to get back to where we want to be next season and that's a playoff team,” said Benning. “Buyouts are going to be part of our strategy this summer to save cap space.”

The most obvious candidate for a buyout is Loui Eriksson, who spent the bulk of this past season on the taxi squad. If buried in the minors next season, his $6 million contract will have a cap hit of $4.875 million. If bought out, he would still have a $4 million cap hit, a savings of just $875,000.

A buyout for Braden Holtby would net the Canucks significantly more cap space, though a replacement backup goaltender would be needed. Jake Virtanen could also be bought out, though his current situation is obviously much more complicated.

As for who the Canucks will be looking to acquire, Benning put a clear priority on the team’s forward depth.

“We want to add guys that can support, supplement our top 9 forwards, we want to try to have three scoring lines,” said Benning. “So, we're looking at a different type of player here. We're looking at players that drive offence that we can play with our other offensive players, because we need to score more, we need to spend more time in the other team's end.

“We can't be on our heels. We've got to be better in the middle of the ice, we can't have so many high-danger scoring chances against. I think if we have better offensive players, I think it starts by spending more time in the other team's end.”

This is all very positive and speaks to Bo Horvat’s concerns that he voiced on Thursday about needing better forward depth that can put up points.

The question is where will these forwards come from. The team has spent a lot of money on their bottom-six in previous years, primarily on veteran defensive players who have not moved the needle offensively. Can they find offensive-minded, possession-driving players given their cap constraints?

Young players who didn't take the next step

Benning previously pinned his hopes on players within the organization to step into those depth forward roles.

“We want to add speed and depth to our forward group,” said Benning. “I thought maybe this year, some of the players that we thought were going to take the next step in their development — some 23, 24-year-old guys that we thought would be able to kind of keep moving forward and take more responsibility on — that didn't happen, and that's on me.”

It’s not hard to pinpoint who he might be referring to. Virtanen, Adam Gaudette, and Zack MacEwen were all 24 years old this past season and none of them had the seasons anyone was hoping for. Virtanen had 5 goals and no assists in 38 games, Gaudette had just 7 points in 33 games and MacEwen managed 2 points in 34 games.

The question for Benning is whether young players like Kole Lind, Jonah Gadjovich, and Will Lockwood can step into bottom-six roles next season or whether he’ll need to look to free agency and trades to get players that can drive offence.

Does Benning have an answer for his biggest critics?

There are plenty of Canucks fans, however, who have lost trust in Benning’s ability as a general manager. At one point, Benning was asked directly about fans that have not been happy with his work: “What do you have to say to them to assure them that things will be different going forward?”

He didn’t really have an answer. Here’s how he replied instead:

“Well, it's been a challenging year. I guess when we look right back at before the pandemic, — before we even paused in the first place — we were at a general manager's meeting and the cap, they were forecasting for this year, was going to be between $85 and $88 million. So, we had the space to do what we needed to do last summer, a week later we got shut down with a pandemic and then came back, played in the bubble. But, coming out of the bubble — I thought the bubble was a great experience for young players playing playoff hockey to do all that — coming out of the bubble with a flat cap happening this year, we had some tough decisions to make.

“Going forward, we knew we had [Thatcher] Demko, [Elias Pettersson], and Quinn [Hughes] that needed to be signed. We got Thatch done, we're gonna work hard here this next little bit to get Quinn and Petey signed, and then go from there. We need to build around these guys. These are core pieces that are important pieces that you need to win, but they need the continued support throughout the lineup, to get to where we want to get to.”

I’m not sure that re-signing the team’s franchise players and asserting that they’ll build around them will do anything to assuage the concerns of Benning’s critics. Re-signing Demko, Pettersson, and Hughes is the bare minimum — failure to do so would have even the most diehard Benning supporters calling for his head.

That said, Benning’s focus on forward depth — specifically depth that can drive offence — sounds promising. Now it will be up to him to deliver on that promise over the next several months.

Jim Benning followed in the footsteps of his mentor, Peter Chiarelli, and built the Edmonton Oilers
Feb 26, 2021 5:39 PM
Comments