"He's got a strong understanding of different parts of the game that no one talks about."

A few years ago, Brock Boeser was the focal point of the Canucks rebuild.

Boeser came in as a rookie and immediately led the team in both goals and points despite playing just 62 games. He was the talk of the entire league, winning the accuracy shooting competition at All-Star weekend and being named the All-Star Game MVP. He looked poised to become, at the very least, a consistent 30-goal scorer, with the potential for 40 or even 50 goals.

Heading into his fourth season, however, few are paying close attention to Boeser. And that might be for the best.

“I haven’t been asked a lot of questions about Brock, which is maybe a good thing,” said head coach Travis Green, “He’s just becoming a really good hockey player.”

Over the past couple of seasons, the spotlight has turned towards other young Canucks: Elias Pettersson stepped in and immediately looked like a franchise forward, if not a full-fledged superstar. Quinn Hughes joined the team and quickly established himself as one of the best defencemen in the NHL.

This year, all of the focus at training camp has been on Nils Höglander, who was granted an opportunity to play on the second line and ran with it, earning a spot in the starting lineup. Fans and coaches alike are hopeful he can be the missing piece on right wing alongside Bo Horvat and Tanner Pearson.

Missing among all the Höglander hype is that Boeser has arguably been the best player at training camp.

“He looks a little quicker to me,” said Green. “His shot release, I think he’s worked on that, you saw on the goal he scored in the scrimmage with the half-slapper down the wall. He looks a little more fluid.”

For those paying attention during camp, “fluid” is the right description. His skating, never the strongest part of his game, looks more effortless. He didn’t score a single goal with a slap shot last season, but his slap shot now looks significantly improved, with smoother mechanics, more power, and better accuracy.

“Skating is something I'm always working on, I always feel I can get better at that,” said Boeser. “I put in the work ethic and try to come back a better skater than I was the year before. I'm feeling good out there, my body feels good. Shot's still good.”

After three seasons that have been interrupted or ended early by injuries, just the fact that Boeser was healthy all off-season to train and prepare is a good sign. He’s given no indication with his play in training camp that there are any lingering effects from his past injuries.

“When my body feels good, then you kind of notice how I feel out there,” he said. “It's been good so far, it's just maintaining that and staying ahead of anything that pops up.”

Beyond the hope for more goals and points, Boeser’s improving two-way game will be essential to the Canucks’ success. Green talked about putting the Elias Pettersson line in more of a match-up role in the coming season, trusting that Pettersson can handle the defensive responsibility that goes along with facing top lines, but he also noted that Boeser is ready to handle that same responsibility.

Analytically, Boeser has a significant impact on the defensive end of the ice, more than one would expect from a player that was pegged as purely a sniper when he entered the league.

For example, Boeser’s heat map from HockeyViz.com — which attempts to isolate a player’s impact by accounting for usage, teammates, competition, and other factors — shows a significant impact on the defensive end of the ice, with a below-average impact on the offensive zone. Essentially, Boeser made opposition shots 11% less dangerous than average when he was on the ice, which is massive for a forward, particularly a winger. 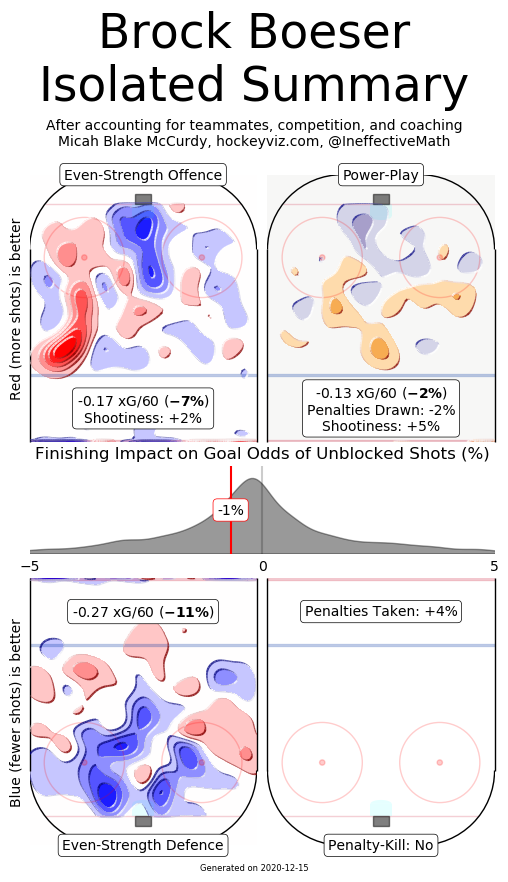 That’s a shift from his rookie year, where he had a much bigger impact offensively but gave up more defensively. If he can improve his offensive impact in the coming season while still maintaining his defensive game, he could have a massive two-way impact for the Canucks.

Boeser craves the responsibility of outplaying the best players in the NHL.

“There were times last year where we told coach that we want to go against the top lines,” said Boeser. “We feel we're one of the top lines in the league and we can play against any other line. I think whenever we get that matchup against another top line we definitely take pride in it and it's exciting.”

If Pettersson, Boeser, and J.T. Miller do end up matched up against top lines more often, that could free up the Horvat line, with a rookie Höglander, to play more of an offensive role. That could be beneficial for both Höglander and Horvat, as well as the team as a whole, giving them more flexibility in how they deploy their lines and get secondary scoring.

It would be great for Boeser to bounce back from a 16-goal season and start sniping goals the way he did as a rookie. Even if he doesn’t, he is still poised to have a big season riding shotgun with Pettersson and providing the two-way impact the top line will need against the best players in the NHL.