The Canucks lost a couple of key leaders in the room this offseason: who's ready to step into the leadership void?
Nov 20, 2020 4:37 PM By: Daniel Wagner 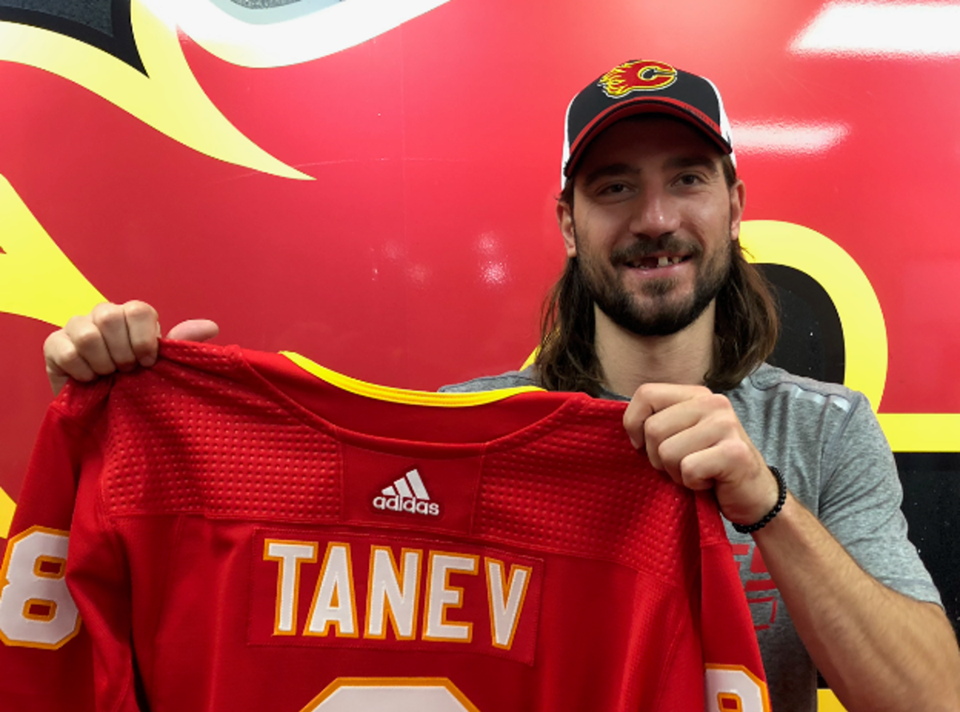 The Canucks didn’t just lose a number one goaltender and a shutdown defenceman when Jacob Markstrom and Chris Tanev signed with the Calgary Flames this offseason; they lost two key members of their leadership core.

Markstrom was well-liked by his teammates and set the tone in many ways with his work ethic. His fellow goaltender Thatcher Demko has always been quick to credit Markstrom for his support and Markstrom is at his most prickly with reporters when it comes to defending his teammates, particularly the defencemen. Even without a letter on his chest, he was a leader for the Canucks.

Tanev, meanwhile, had a letter and he was well-deserving of the “A” on his jersey. He particularly focused on taking the younger players on the Canucks roster under his wing, to the point that players like Brock Boeser, Quinn Hughes, and Elias Pettersson jokingly called him “Dad.”

Boeser, Hughes, and Pettersson were regulars at Tanev’s house, where he and his partner,  Kendra, prepared home-cooked meals and a place to hang out. He and Hughes even took to post-dinner games of chess.

“He’s a really good chef, spoiling us,” said Pettersson when asked about Tanev’s cooking. Apparently, he’s so good that Pettersson couldn’t even pick a favourite meal, calling “everything” his favourite. Boeser, on the other hand, quickly named Tanev’s Greek chicken and salad as a favourite, while Hughes went with Mexican food.

“You can’t beat when he starts pulling out the tacos,” said Hughes.

Their leadership, as well as friendship, will be missed in the Canucks room. Fortunately, the Canucks still have a strong group of leaders, including team captain Bo Horvat and alternate captains Alex Edler and Brandon Sutter. The players acquired to replace Markstrom and Tanev on the ice, Braden Holtby and Nate Schmidt, come with leadership traits of their own.

There is a practical concern when it comes to the Canucks’ leadership: who will take up Tanev’s “A” now that he’s gone?

Assuming that Edler and Sutter continue as alternate captains next season, the Canucks could still use one more alternate. Let’s run through a few of their options.

The Canucks’ young superstar isn’t just a wizard with the puck: he’s got plenty of leadership traits on and off the ice.

Pettersson leads by example with his unmatched work ethic, constantly striving to improve every part of his game. When he doesn’t play well — which is rare — he owns it with the media and his teammates, pushing himself to perform better and driving his teammates to do the same. Away from the rink, Pettersson does his best to be a role model, despite the occasional misstep.

There was even some debate among Canucks fans before Horvat was named captain that perhaps Pettersson was the better choice. There’s a school of thought that the team’s best player should be the captain and that’s clearly Pettersson, though it doesn’t hurt that he has so many leadership qualities.

Picking a young player would also help transition the team from being led by ageing veterans that may not be with the team for much longer in the future to being led by the young, exciting core that the Canucks hope will carry them to the Stanley Cup.

Jim Benning took a risk when he traded for J.T. Miller last offseason, but it paid off in a big way. Miller quickly found chemistry with Pettersson, forming a dynamic duo on the Canucks’ top line.

Miller not only set new career-highs in goals, assists, and points, he also led the Canucks in scoring with 72 points in 69 games. He followed it up with another 18 points in 17 playoff games.

Beyond all the points, Miller also took a significant leadership role, which came as a surprise given his reputation before the trade. He was known for clashing with then-Rangers coach Alain Vigneault when he was in New York, with Vigneault describing it as “tough love.”

Miller isn’t clashing with his coach in Vancouver. Instead, he’s one of the most prominent voices in the room, and not just because he’s the loudest, most talkative player on the roster, though that is also true.

“This has been the first year that I felt an obligation, that I want to be a leader,” said Miller early in the season. “I’m a vocal guy, sometimes being hard on the young guys. I think that’s part of the process. My whole career I’ve been fortunate enough to have really good leadership around me and I’ve learned a lot from them, what it takes.”

On the top line, Miller helped forge a new identity with Pettersson and Brock Boeser, playing with grit to go with their skill.

“We don't want to play like a skilled line,” said Miller. “I think when we play well and break other teams down, then the skill takes over and things start to open up. When we're skating and creating turnovers, it's a contagious thing, that's our team's identity.”

What do you call a player that has that kind of impact on a team’s identity? He’s a clear leader. For Benning, that was the aspect of Miller’s game that surprised him the most.

“The one thing that [Miller]’s exceeded my expectations in is the leadership that he's brought in the room with our younger players,” said Benning. “He’s mentored some of them and helped them along their path.”

While Miller is more experienced than the Canucks’ young core, he’s still pretty young, having just turned 27. That might make him a solid choice to wear an “A” as the team transitions to its younger group.

If the Canucks want to go with a younger player rather than a veteran, Brock Boeser is a dark horse. Not only is he a first-line forward, but Boeser is also a glue guy in the room. He’s an extremely likeable person and definitively gives the best hugs of any Canuck.

Boeser previously wore an “A” in his sophomore season with the University of North Dakota and was praised for his leadership abilities when he was drafted. Even in his rookie season, Boeser’s character and leadership set him apart.

“He’s a great guy. He’s a leader on this team already and has done so many great things on and off the ice,” said Jake Virtanen at the time. “Everybody loves him.”

Beyond what he does on the ice, Boeser is great in the community as well, whether it’s his friendship — and prom date — with Baylee Bjorge or meeting kids at BC Children’s Hospital, even if it has to be a virtual visit during the pandemic. Boeser recognizes how blessed he is to be in the position he’s in and clearly sees the opportunity and the need to give back.

Boeser has been through a lot of hardships in his life and they’ve helped mould him into the person he is today: kind, generous, hard-working, and a great leader.

Perhaps Boeser isn’t as likely as Pettersson or Miller to get the “A,” but there’s another argument for him to get it: maybe he needs it. Boeser’s goalscoring dropped off this past season and maybe being asked to take a larger leadership role could drive him to more on-ice excellence as he looks to set the example for his teammates.

Apart from newcomer Nate Schmidt, no one is signed to the Canucks longer than Tyler Myers. The lanky defenceman is signed through 2024 and has played 11 seasons in the NHL, so he has plenty of experience to share with the rest of the team.

Myers is already taking a leadership role this summer with Jake Virtanen, training with the winger in Kelowna and inviting him into his home.

“He's a busy man, he's got his son and his wife and he's doing a lot of stuff. He kind of treats me like his son, which is pretty cool too," said Virtanen. "I go over there, post-workout we'll have smoothies, hang out for a bit, we'll go skate together, and then the rest of the day we just hang out, so it's good."

Hang on, Myers treats Virtanen like his son? Sounds like a new candidate for "Team Dad" to step into Tanev's white New Balance sneakers.

If the Canucks want another veteran to wear an “A” in place of Tanev, perhaps Myers is the right choice.

There’s no rule that a team has to have three alternate captains. In fact, it used to be the norm that each team had just two alternates. In fact, it’s in the NHL rulebook.

What this means is that in any given game, only three players are allowed to wear a letter on their sweater. This has a practical purpose on the ice: only captains are allowed to discuss “any point relating to the interpretation of the rules” with a referee, or an alternate captain if the captain isn’t on the ice.

Some NHL teams take this rule and only name one captain and two alternates for the entire season, only giving another player an “A” if one of the captains or alternates can’t play for whatever reason. Other teams name more than two alternates, but only have two players wear an “A” each game, rotating the alternate captains on a game-by-game basis.

Most teams have one captain and three alternates, while some teams have as many as four alternates, like the Dallas Stars, Edmonton Oilers, and Nashville Predators. The Canucks, however, could join the likes of the Carolina Hurricanes, Colorado Avalanche, and Minnesota Wild and only have two alternates.

New Canuck Braden Holtby is stuck at the Canadian border with his two tortoises
Nov 18, 2020 4:09 PM
Comments
We welcome your feedback and encourage you to share your thoughts. We ask that you be respectful of others and their points of view, refrain from personal attacks and stay on topic. To learn about our commenting policies and how we moderate, please read our Community Guidelines.