Can the Canucks afford to re-sign Tyler Toffoli this offseason? 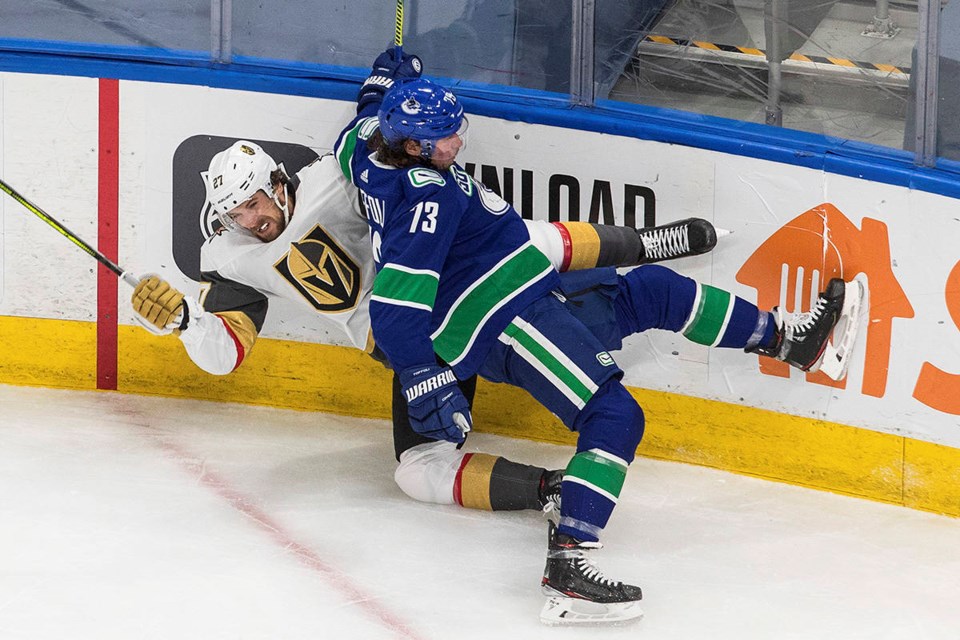 “I want to stay in Vancouver and that’s my number one priority as of right now,” said Toffoli in a Zoom call with the media from his home in Los Angeles.

“My transition was super easy,” he added. “I felt I fit in really well on the ice and off the ice with all the guys. It was a little shorter than I wanted it to be.”

Toffoli’s stay in Vancouver has thus far lasted just 17 games, though that wasn’t exactly his fault. He played 10 games in the regular season before a global pandemic shut the season down, then got injured in the first game of the qualifying round, returning in time to play a total of 7 postseason games.

“It was definitely a small sample size, but it was a good sample size," said Tanner Pearson, who played with Toffoli with the L.A. Kings and was a groomsman in his wedding. “I'll be biased until the end of time, but he can definitely help us and I'm hoping that he's back in blue.”

Toffoli hit the ground running as soon as he donned a Canucks jersey, finding a home on the top line with Elias Pettersson and J.T. Miller with Brock Boeser out of the lineup with an injury. Between the regular season and playoffs, he had 8 goals and 14 points in 17 games. That’s a 39-goal, 68-point pace over an 82-game schedule, which would eclipse his career highs.

Even if he is unlikely to put up those kinds of points over a full season, Toffoli still has significant value as a play driver. He’s an analytics darling, putting up gaudy possession numbers throughout his career, even on Kings teams that slipped and struggled over the past several years.

While Toffoli has a great shot with a quick release, the most important part of his game is his excellent hockey IQ. He reads plays well both offensively and defensively, putting himself in a position to pick off passes at one end of the ice and get open for passes at the other end. His style of play and commitment to playing a two-way game makes him a great fit for a Travis Green-coached team.

Given the Canucks’ struggles in puck possession, a full season of Toffoli could be a real difference maker. He rounds out the right wing in the top-six, giving the Canucks two fantastic options with Brock Boeser. While he’s already shown great chemistry with Pettersson and Miller, he also makes sense with Pearson and Bo Horvat, where he can play in more of a matchup role with his strong defensive game.

Unless GM Jim Benning can create some cap space by trading away one of the Canucks’ expensive bottom-six forwards, he simply will not be able to re-sign all of the team’s pending free agents. That could mean a tough decision between the three biggest unrestricted free agents on the roster: Toffoli, Jacob Markstrom, and Chris Tanev.

Contract projections from analytics site Evolving Hockey predict a 5-year contract for Toffolii, with an average annual value (AAV) of $5.75 million if he re-signs with the Canucks. That would be a decent raise from his last deal, worth $4.6 million per year, but not an unreasonable one.

Can the Canucks fit that kind of contract under the cap while also bringing back Markstrom and Tanev? That’s a little more questionable.

The Canucks can offer Toffoli a couple of things that he might not be able to get elsewhere in free agency.

One is long-term security. The Canucks have a tight cap situation next season, but relatively few long-term contracts, with Tyler Myers signed the longest through 2024. While the cap space that’s coming off the books after next season will quickly be gobbled up by new contracts for Elias Pettersson and Quinn Hughes, the Canucks could still offer Toffoli a long-term contract that keeps the cap hit relatively low.

“You definitely want the security for yourself and for your family,” said Toffoli. “If things progress, and not in the right direction, then that’s when I have to think about going to a different place.”

There’s another thing the Canucks can offer that other teams can’t: a chance to play with an up-and-coming superstar like Elias Pettersson.

“They have some kids in this organization, some guys that really stepped up and showed that they are ready to take the next step,” he said. “It’s definitely an exciting time to be in Vancouver and it’s definitely something that people want to be a part of.”

There has to be an appeal to playing for a team that is on the rise for Toffoli, who is 28 and looking to win his second Stanley Cup. After winning the Cup in his rookie year in 2014, the Kings missed the playoffs in four of the last six seasons and didn’t make it out of the first round in the other two. Struggling for that many seasons wears on a player.

With the Canucks, Toffoli could have the chance to be a key part of taking a team back to the Stanley Cup Final. He won’t find that with any of the teams in California, where he and his wife have put down roots. All three California teams are in the midst of a rebuild, with no promises of getting back to the playoffs any time soon.