In his first year as captain of the Canucks, Bo Horvat was the picture of poise all season long, with just one exception: when I asked him if he could discuss his individual performance this season rather than just how his team performed.

It was the first time I have ever seen Horvat flustered and at a loss for words. This is the guy who didn’t hesitate to take a strong stance against Don Cherry’s discriminatory comments back in November, saying there was “no place” in hockey for what he said. This is the guy who spoke calmly and assuredly when he and his fellow players refused to play in protest during the playoffs, standing in solidarity with black athletes against racism and police brutality.

On those difficult topics, Horvat had no problem finding his voice. Ask him to speak about himself? That’s a lot harder.

At first, Horvat struggled to find the words, saying, “Yeah, I mean, obviously, I think…” before finally landing on a phrase he was comfortable with: “The team playing well deserves the credit for me playing well. My linemates were playing well, everybody was playing well for me to get those opportunities and score those goals. The team doing as well as it did made my game rise to the next level.

Horvat couldn’t help himself. Even when asked to speak about his individual game, he had to give all the credit to his teammates, though he did allow space for a little pride at the very end.

“The pucks were going in for me, which was nice.”

It was nice and so was Horvat’s season. Horvat is about as team-first as NHL players get, but while he might be unable to talk up his individual performance, I’m under no such restrictions.

There’s a lot to like about Horvat’s numbers this year. Despite the shortened season, Horvat hit 20 goals for the fourth-straight year, finishing with 22 goals and 53 points in 69 games, good for third on the Canucks in both goals and points.

In the playoffs, Horvat broke through with 10 goals in 17 games, leading the NHL in goalscoring through the second round. As of now, he still holds the goalscoring lead. That’s a pretty stunning accomplishment for Horvat, who has been known for his big-game performances in the past, such as his 16 goals in 21 games during the 2013 OHL playoffs.

Horvat also took a big step forward in the faceoff circle, winning 57.32% of his draws, good for 7th in the NHL, right behind Patrice Bergeron. Somehow, that was still only third on the Canucks, with both J.T. Miller and Jay Beagle finishing top-three in the NHL in faceoff percentage.

Horvat was leaned on heavily all season, finishing with an average of 19:44 per game, second only to Miller among Canucks forwards in ice time.

The one knock against Horvat in his boxcar numbers is his plus/minus, which was the worst on the team at minus-15. Fortunately for Horvat, we don’t truck with plus/minus around here, so he still gets an A.

Horvat’s season by the underlying numbers wasn’t quite as good as his boxcar numbers would suggest. Let’s look at a few different advanced statistics for Horvat. 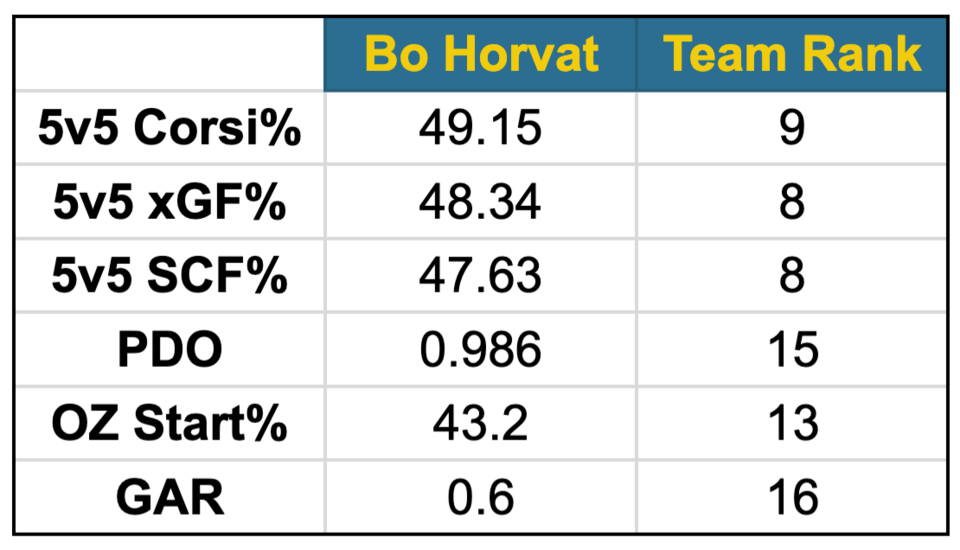 Key possession statistics for Horvat were all under 50%, indicating that the Canucks were out-possessed by the opposition when Horvat was on the ice at 5-on-5. His corsi — shot attempt differential — was the best of the bunch at 49.15%, but still below 50% and ninth on the Canucks.

He was slightly worse by both scoring chance differential and expected goals, which takes into account both shot quantity and shot quality.

Evolving Hockey’s all-in-one metric, Goals Above Replacement (GAR), has Horvat as the 16th most impactful player on the Canucks, performing just slightly above a replacement-level player at 0.6 GAR.

There are, however, some contextual factors at play. Horvat faced tough competition frequently in a matchup role and had a wide range of linemates, aside from Tanner Pearson, who was pretty much stapled to Horvat’s hip. Their third linemate rotated between Loui Eriksson, Jake Virtanen, Josh Leivo, and J.T. Miller, with a wide range of results. He also started a higher-than-average number of his shifts in the defensive zone.

We can look at Horvat’s Isolated Summary from HockeyViz, which attempts to account for those contextual factors and isolate Horvat’s actual impact on the ice. 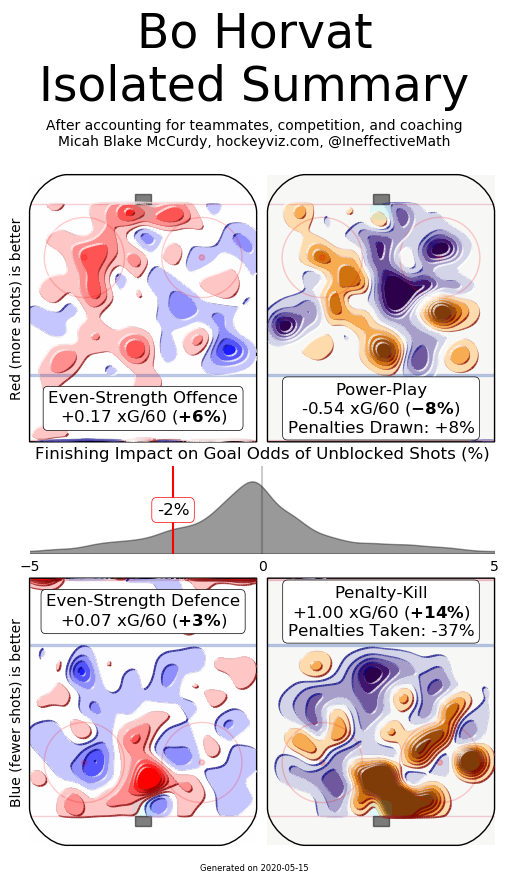 It also has some interesting things to say about Horvat’s impact on special teams, but we’ll get to that.

So, while Horvat did have underlying numbers that weren’t great, when taking into account the context of his usage, competition, and linemates, Horvat still was above average at 5-on-5. That earns him a solid B-.

Social Studies (Leadership and Intangibles): A+

Horvat’s first year as Canucks captain was a great one, as he helped lead the team back to the playoffs for the first time in five years. Beyond the team’s performance, however, it was clear that Horvat’s leadership was felt by everyone in the room.

When he was first named captain, Horvat talked about the most important aspects of leadership he learned from Daniel and Henrik Sedin.

“Having a voice and having an opinion,” said Horvat. “I think having that comfort level that guys can come to you with anything and you can be comforting and easy to talk to, and obviously lead by example on the ice as well.”

Horvat did all of the above. The rest of the Canucks repeatedly talked about the example he set both on the ice and off the ice with his commitment and consistency. Mature beyond his years, Horvat helped bridge the gap between the veterans and youth in the locker room, able to relate to everyone with seeming ease.

His ability to cultivate a connection with everyone on the team and help keep them all on the same page as they pushed for and through the playoffs is a testimony to his leadership.

As stated above, Horvat wasn’t afraid to talk to the media all year about difficult topics, but he was also a reliable quote on more mundane matters on a day-to-day basis. Horvat learned well from the Sedins, speaking honestly about the team’s performance, but still spinning things towards the positive.

For communication away from the rink, Horvat has a solid social media presence, both on Twitter and on Instagram, including an adorable pregnancy announcement back in January featuring his popular french bulldog, Gus.

Well-spoken in every situation, Horvat also tackled tough topics on social media, such as his statement supporting #BlackLivesMatter after the death of George Floyd.

All told, you couldn’t ask for much more from the Canucks’ captain when it comes to communication.

Horvat is an elite athlete playing in the NHL.

This is a tough one to assess for Horvat. As seen in his shot map breakdown from HockeyViz above, Horvat doesn’t have a great impact on the power play and really struggles on the penalty kill, arguably the area where he needs the most improvement.

While Horvat wasn’t necessarily the driver of the Canucks’ success on the power play, he still played a crucial role when it came to finishing from the slot and around the net. Horvat played primarily in the bumper role, where he was available for quick one-timers in the slot from the left side. With penalty kills cheating towards shooters like Elias Pettersson and Brock Boeser, that opened up opportunities in the middle for Horvat.

As for the penalty kill, Horvat averaged just 25 seconds per game shorthanded, less than 30 minutes total over the course of the regular season. While he did struggle in that role — he had the highest rate of goals allowed of any Canucks forward on the penalty kill — it didn’t hurt the team too badly because he wasn’t a primary penalty killer.

Given his goal-scoring knack on the power play, which was one of the biggest reasons for the Canucks’ success this season, he deserves a B+ on special teams.

Horvat’s first year as captain of the Canucks could not have gone much better, and yet, there’s room for improvement. If Horvat can polish up his defensive play, he could bump his score up from an A to an A+ in the future.