Elias Pettersson got pelted with candy by a childish Colorado Avalanche fan but not before helping the Vancouver Canucks to a 4-3 win.

Yes, yes, the Vancouver Canucks defeated the defending Stanley Cup Champions, the Colorado Avalanche on Wednesday night — a potential statement game for a team in desperate need of a turning point for their season.

But we need to talk about something far more important: exactly what candy hit Elias Pettersson in the third period?

Late in the third period, an irate Avalanche fan chucked a bag of multi-coloured candy on the ice, striking Pettersson in the left skate. The bag exploded, scattering candy across the ice and causing a lengthy delay.

Elias Pettersson got hit by a bag of candy thrown on the ice by a fan in Colorado 😬 pic.twitter.com/QkUTVT50pS

The fan was presumably mad at the referees, who had just called a penalty on the Avalanche with one minute remaining. That’s despite the officiating arguably favouring the Avalanche, who had more power plays in the game than the Canucks — six in total, including a lengthy two-man advantage in the second period — while the Canucks had a goal disallowed for dubious reasons.

Perhaps that’s what the fan was really mad about. As CanucksArmy’s Lachlan Irvine pointed out, if that disallowed goal had counted, the Canucks would have had a two-goal lead in the third period and the Avalanche would have been guaranteed a comeback victory.

The candy wasn’t the first foreign object thrown onto NHL ice on Wednesday. New Jersey Devils fans littered the ice with bottles and cans (just clap your hands) and at least one chicken finger.

At least the Devils fans had a good reason to be upset. The Devils had three goals disallowed in a one-goal loss to the Toronto Maple Leafs, ending a 13-game winning streak one win short of tying a franchise record.

Throwing trash on the ice is childish and dangerous no matter what the reason but it seemed particularly childish in Colorado given the situation, so maybe it’s fitting that such a childish item was thrown. But what candy was it? 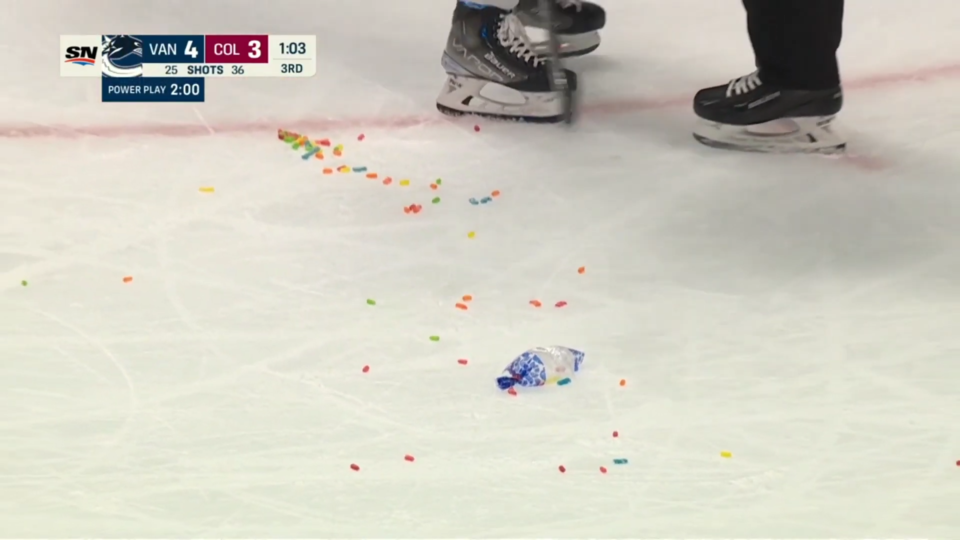 John Garrett confidently said it was jelly beans, but he and John Shorthouse also commented on the distance the commentating booth is from the ice in Colorado. Some speculated on social media that it was gummy bears or gummy worms, while others guessed specific name-brand candy.

What appeared to trip people up in identifying the candy is that it wasn’t just one type. The fuming fan threw a grab bag of some sort — it appeared to be fastened at the top by a twist tie — that featured at least two types of candy.

As a long-time candy connoisseur, I can positively identify two of the candies: Sour Patch Kids and Mike and Ikes. That’s a controversial mix, as the two candies are owned by completely different companies. We’re talking unauthorized grab bag mixing at Ball Arena here.

There may have also been some sort of gummy bear in the mix and some fans swore they saw Swedish Fish but it was tough to tell as some of the scattered candy was out of focus. The candies that some thought might be gummy bears or Swedish Fish could have just been Sour Patch Kids or Mike and Ikes that were misshapen by the force of the fall to the ice.

Heck, I can almost convince myself I see a Sour Cherry Blaster in the blur at the impact point but that may just be candy pareidolia on my part.

One of the candies even got lodged in Pettersson’s skate. 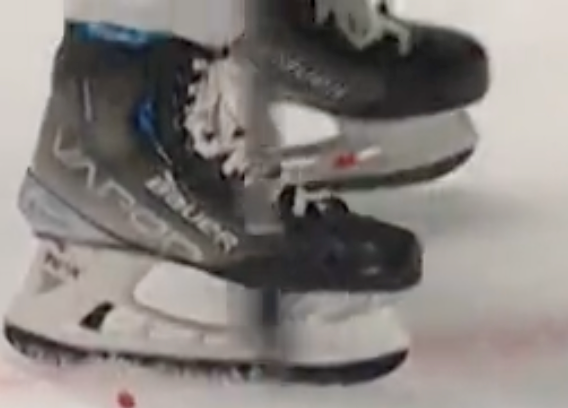 I’m leaning toward that being a Mike. Or maybe an Ike.

Prior to the candy calamity, the Canucks played a heck of a hockey game. And, sadly bereft of any candy of my own, I watched this game.

Spectacular save by Spencer Martin as he reads Makar's pass perfectly and robs Toews. #Canucks pic.twitter.com/Dm1WrtkmMO

I Watched This Game: Gonzo third period sees Canucks cough up another multi-goal lead to Vegas
Nov 22, 2022 1:08 AM

I Watched This Game: Pettersson, Boeser help Canucks overthrow the monarchy
Nov 19, 2022 12:18 AM