Gadjovich has found his scoring touch in his third year with the Utica Comets in the AHL.
Apr 20, 2021 4:10 PM By: Daniel Wagner 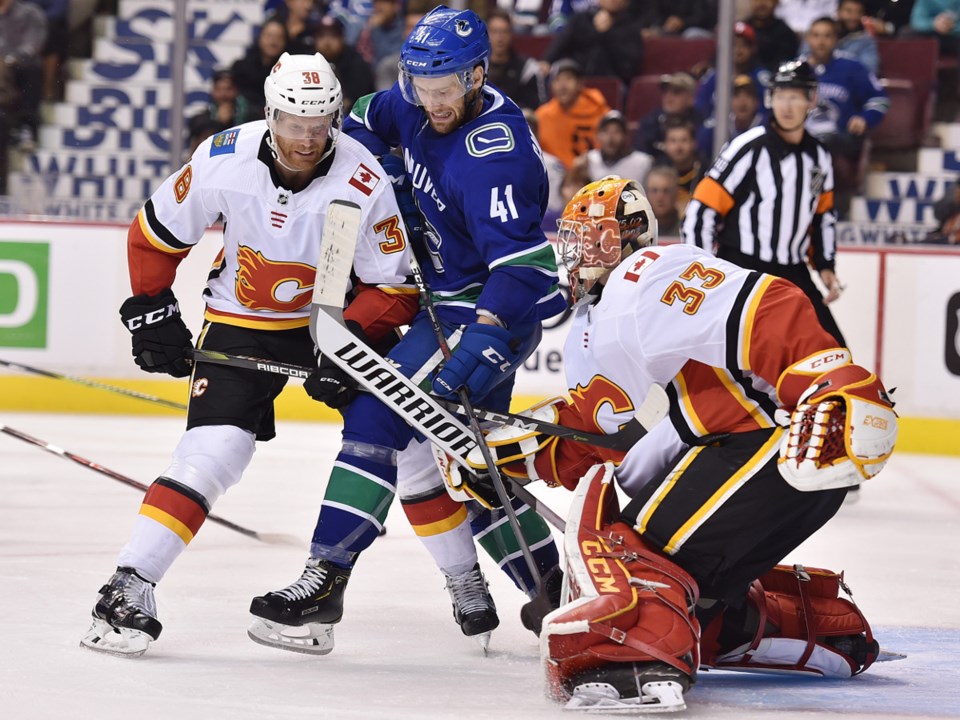 Written off after his rookie AHL season, Jonah Gadjovich has worked his way back into contention to make the NHL with the Vancouver Canucks.Dan Toulgoet / Glacier Media

When the Canucks selected Jonah Gadjovich late in the second round of the 2017 NHL Entry Draft, he seemed like a steal.

A 6’2” power forward, who finished third in the OHL with 46 goals in 60 games in his draft year? Generally speaking, those are the types of players that GMs trip over themselves rushing to the draft stage to take in the first round.

Sure, he had the benefit of playing with a great playmaker like Nick Suzuki as his centre and there were some serious concerns about his skating, but getting a natural goalscorer that late represented great value for the Canucks.

But then Gadjovich hit the AHL and the learning curve turned into a wall. Gadjovich struggled to stay in the lineup in his rookie season with the Utica Comets in 2018-19, managing just 4 goals and 10 points in 43 games. The flaws in his skating left him a step behind, literally, and his size was no longer the difference-maker it was in Junior.

“Everyone is my size or bigger,” said Gadjovich heading into his second year. “I mean, you go from junior, and I was a big strong guy, and I'm still strong. It's just when you're playing against every guy who's basically your size, then you have to adjust your game and that was something that I was trying to figure out.”

Gadjovich was committed, however, to doing the hard work to make it to the next level.

“I want to play for the Vancouver Canucks and if that means that I have to be in Utica for a year or two or three, then that's what I'm going to do,” he said. “I'm going to grind it out, I'm going to put in the extra time and work, and I'm going to do whatever it takes.”

With 13 goals in 38 games in his second year, Gadjovich took some positive steps. This season, his third in the AHL, the wall he hit in his rookie year has looked like the warped wall to an experienced Ninja Warrior. Gadjovich has rocketed to the top, scoring goals seemingly at will.

Gadjovich has 12 goals in just 14 games this season, finding a way to reassert himself with his size and strength in front of the net. That’s good for 5th in the AHL in goalscoring, with most of the players in front of him having played literally twice as many games as he has.

He used his size in a very literal way on his latest goal. He cycled the puck to the point, then got to the front of the net, where he won a jump ball for a deflected shot, then quickly dropped the puck to his stick for the forehand finish.

Gadjovich has made his living this season in front of the net, banging in rebounds and finishing off passing plays. He not only has the size and strength to fight off defenders in front but also the quick hands to corral the puck and find the back of the net.

He’s also not a one-dimensional goalscorer, as he also has a pretty lethal wrist shot from distance that he can unleash when the situation calls for it.

There are two questions for Gadjovich. One is whether he can bring that goal-scoring acumen to the NHL level. He has a knack for being in the right place at the right time to put the puck in the net, but open space is harder to find in the NHL and battles in front of the net are more difficult.

The second question is whether there is enough to the rest of Gadjovich’s game for him to carve out space in an NHL lineup.

“Gadjovich’s skating, for me, will be what holds him out of legitimate NHL call-up consideration,” said Cody Severtson of The Comets Harvest in a recent game review. “This season, his skating has looked okay, but the difference between Gadjovich’s wheels and even a Zack MacEwen is a large chasm.”

At the same time, it’s awfully hard to ignore 12 goals in 14 games, and his skating has taken some serious steps forward. If he can continue to progress his skating and pick up a little bit more speed, he should be in the conversation for a bottom-six role with the Canucks in the future.

Given the way some wrote him off after his rookie year, even being in the conversation in the Canucks prospect pool is a big step for Gadjovich.