In a Canucks prospect pool that lacks centre depth, the development of Linus Karlsson could be crucial.
Cam Robinson Mar 3, 2020 4:13 PM

Do you know who benefitted the most from the Tyler Toffoli trade? Maybe it was Toffoli himself, who went from a basement-dwelling team to one heading to the playoffs. Or Bo Horvat if the two ever hook up outside of overtime. But not far behind on the pecking order is Linus Karlsson.

Karlsson is an oft-forgotten prospect in the Canucks organization. Perhaps this is due to him not being drafted by the team. Or perhaps it has to do with the strange circumstances around his being acquired for Jonathan Dahlen, a player many seemed to believe was just a hiccup away from being an NHL regular.

However, what is not up for debate is the kiddie pool-like depth that the Vancouver pipeline boasts down the middle. It’s bone dry, nearly-bare cupboard stuff, particularly after the trade of their top centre prospect, Tyler Madden, for Toffoli.

The club selected three pivots in the last draft - two of which are actually playing the position regularly this season in Carson Focht and Arvid Costmar. They still own the rights to Dmitri Zhukenov, though the soon-to-be 23-year-old Russian doesn’t appear to be a viable top-level asset.

Then there’s Karlsson. Drafted 87th overall by the Sharks in 2018, he came to the Canucks without much in the way of production or footspeed. There were rumours a few clubs had him on their Do Not Draft list coming in. But clearly, San Jose felt otherwise, and presumably, Vancouver as well.

The 6’1 180lb forward has been traversing the Swedish Allsvenskan for the last two seasons. For those unaware, the Allsvenskan is the second division of Swedish professional hockey. It is not that far off from SHL-levels. The top Allsvenskan team faces off against the bottom SHL club each spring to see who earns the honour of the top tier the following season.

On January 13 of this year, Karlsson was dealt from Karlskrona HK to BIK Karlskroga (I know, it’s a lot of Karls). At the time, the Eksjö-native was producing at a 0.61 point-pace on a floundering club. He was seeing consistent middle-six minutes but was apparently unimpressed with the rate of his development. Sources in Sweden indicate he requested a move.

It certainly appears that he made the right call.

Upon the trade to the contending Karlskroga, the 20-year-old pivot has exploded. He has five goals and 16 points in 10 contests. And that’s with a two-week muscle tissue injury layoff sprinkled in. He’s showcasing impressive creativity and confidence with his new club as exhibited below.

That’s the type of play Chris Pronger would’ve taken exception with and met with a meaty wrist slash or two.

Since the move, Karlsson has been seeing action as the top-line right-winger and earning ample power-play opportunities. He’s found instant chemistry and is being deployed as an offensive talent.

It’s the type of deployment you need to blossom into a viable NHL prospect.

At the time of writing, Karlsson sits 16th in league scoring and leads all U21 scorers in the Allsvenskan. Sure, Jonathan Dahlen has double that amount and leads the league in scoring, but we’ll keep an eye on the positives.

There are not a ton of comparable players that have taken a similar path as Linus and gone on to play in the NHL. However, statistically, Karlsson produces favourably with those that have. 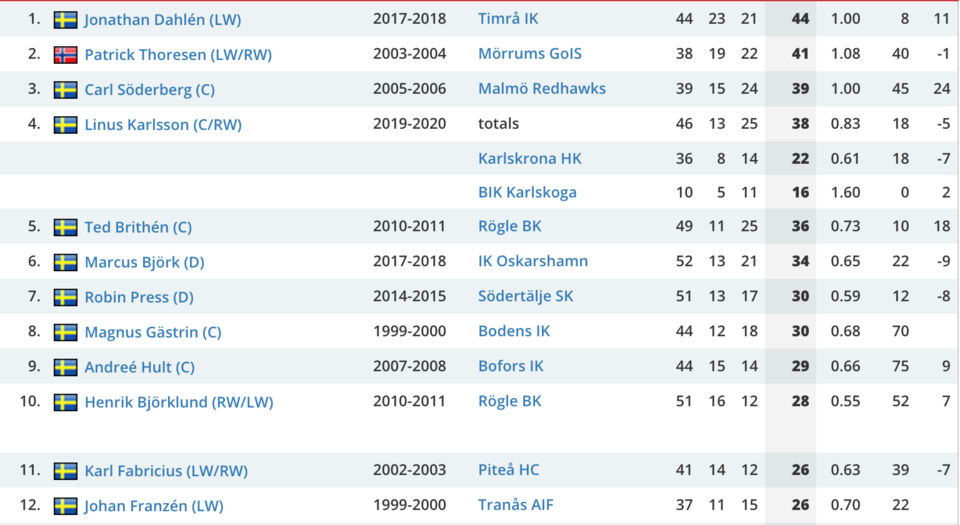 The above image displays all 20-year-old skaters in Allsvenskan history. There are some positive names on that list. Carl Soderberg and Johan Franzen enjoyed the most success. If you scroll further, we see Daniel Alfredsson hanging around with a point-per-game. Hell, Gabe Landeskog spent his draft-plus two campaign in the Allsvenskan thanks to the NHL lockout. He posted 14 in 17 (0.82) - just a hair behind Karlsson’s current 0.83 rate.

Let’s be clear: Karlsson is not a Daniel Alfredsson or Gabriel Landeskog.

The pivot brings an intelligent product to the ice each night. He has solid puck skills, a soft touch, and a release that looks like it could find the back of the net in the NHL from the bottom six.

Now let’s take a look at the underlying data.

Using NextGen Hockey’s co-founder, Jeremy Davis’ pGPS model, we see that the 20-year-old Karlsson is trending in a positive direction. However, the upside remains very much in question. His performance this season has tripled the likelihood of him becoming an NHL forward. 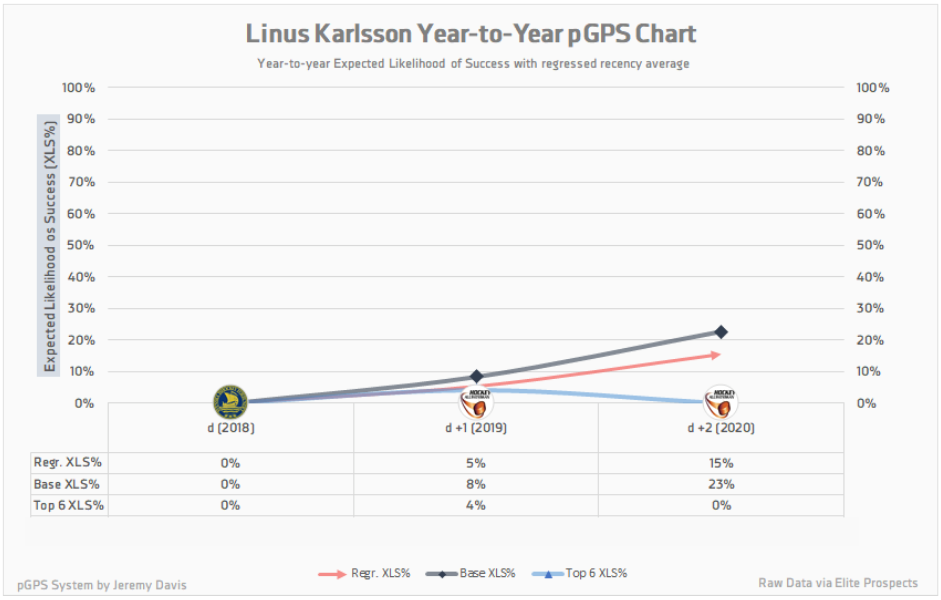 For reference, the pGPS model looks at a player’s statistical and stature-based profile and compares it against that of a cohort of players who display similar attributes — size, age, production, etc. It then computes the likelihood of that player graduating to the NHL based on their cohort.

As far as comparable players, we see a familiar face already discussed above. These historical results haven’t exactly landed a bevy of NHL assets. 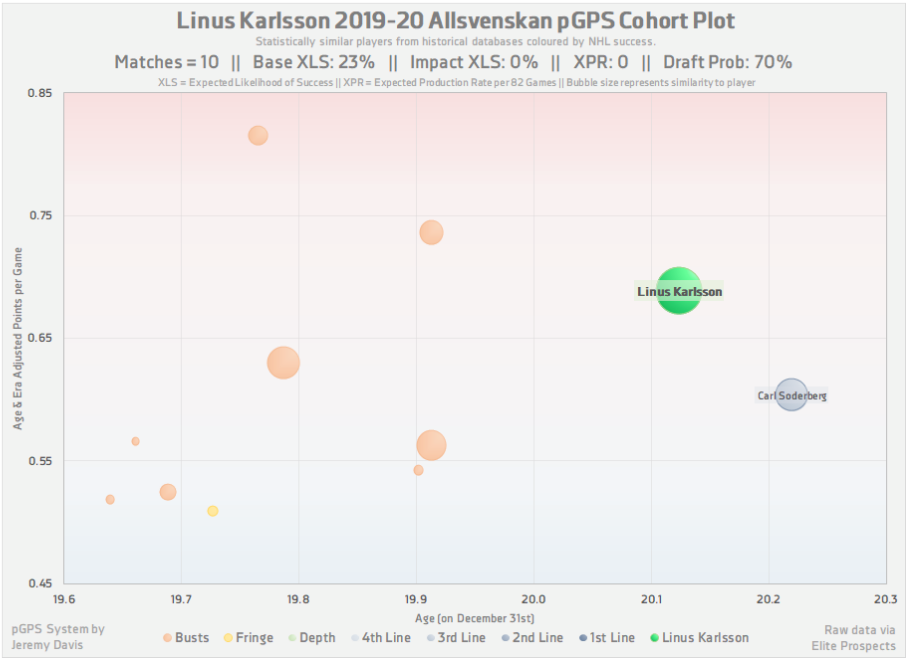 On the flip side, Byron Bader’s NHLProspecting model favours Karlsson a little more. In Bader’s model, Karlsson’s draft-eligible campaign put him in some fine company. After two more seasons, he has several NHL comparables - most notably in Kyle Palmieri and Tyler Johnson. 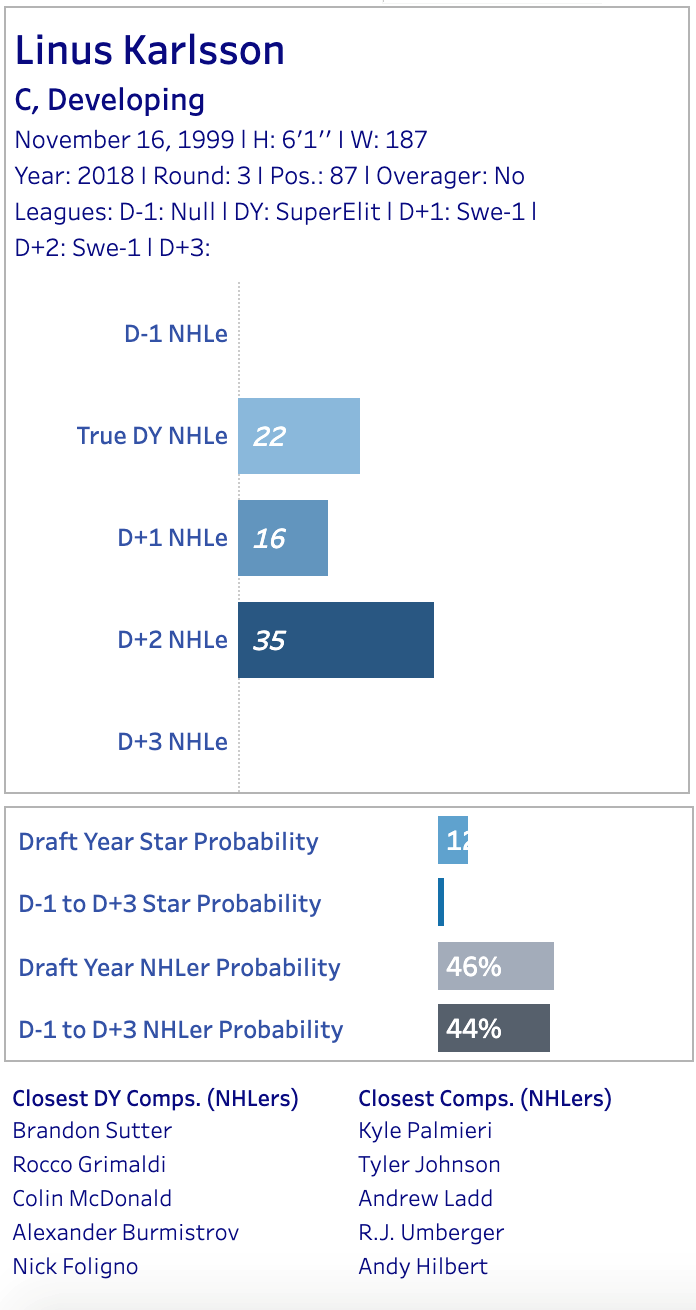 Possessing an NHLe of 35 — the equivalent number of points he might be expected to score in the NHL — in his draft-plus two campaign is solid.

This is a player who plays a very straightforward and well-rounded game. His calling card is the routes he takes and the anticipation he owns. He boasts a heavy release that comes in handy when given some time and space.

However, it’s his puck skills that intrigue me the most — particularly the vision and passing.

Watch below as he quarterbacks the man-advantage unit from the half wall. He has his head up and makes two moves while looking off the defender. They’re subtle plays but you can see the direction in which he pulls the puck in towards his feet indicate he’s loading up for a shot. Additionally, he’s constantly repositioning his feet to maintain the dual-threat before shifting to the pass at the last moment.

In the end, he sends a quick dish across the seam that leads to a goal.

Additionally, he can move the puck around well in tight spaces. Watch below as he uses a little dipsy doodle, outside-inside move that leads to a goal. He fakes a big clapper to convince the defender to step up and go for the poke check. This allows him the space to deke back to the inside before finishing the play.

This clip also demonstrates his propensity for standing a little too upright, which leads to my next point: his skating. It’s the largest hurdle that lies ahead for the 2018 third-round selection and something that is prioritized above all else by NHL clubs.

Despite not being an overly large player, Karlsson tends to lumber around the rink instead of exploding into holes. He exhibits some nice shiftiness to his approach when he has the puck and is working in tight quarters. However, isolating and entering into open spaces in a hurry eludes him.

This will no doubt play a significant role in limiting his upside.

Away from the puck, the intelligence affords him further grace, as well as additional trust from his coaches. It is also a factor that should allow him to gracefully step up to the next level. Just where that next level will be remains up in the air.

Options for next season

Karlsson’s Allsvenskan contract is up at the end of this season. There is some merit in considering a cross-Atlantic trip and attempting his hand at North American pro hockey with the Utica Comets in the AHL. Like the Canucks pipeline, the Comets are not exactly deep down the middle themselves.

Tyler Graovac is a UFA at the end of the season. Ditto for Wacey Hamilton. Same for Carter Camper. Zack MacEwen may have himself a full-time spot in Vancouver next fall.

There will be holes.

This is where Tyler Madden was supposed to step in and fill an offensive role for the club as a first-year player. But with every loss, there is an opportunity. And in this case, that means there will be plenty of opportunities for an incoming Carson Focht and potentially Karlsson as well if he comes on board.

There is also the more likely potential of him staying in Sweden and landing on an SHL club. That would provide him with further opportunities to work on his skill game and improve his skating before coming into the tight-checking, more physical American League game.

However you slice it, with Madden departing, Karlsson immediately became a more important piece to the franchise, if for no other reason than the severe lack of viable centre prospects coming up. It doesn’t hurt that the young man is also finding his offensive touch in a men’s league.

The upside remains limited, but if the latest progressions are any indication, the club could very well have a bottom of the lineup player heading their way in the not-so-distant future.