The Canucks right-side defence is complete but probably not better.
Jul 28, 2021 11:40 AM By: Daniel Wagner

The left side of the Vancouver Canucks’ defence is set. Quinn Hughes is the team’s top defenceman, new acquisition Oliver Ekman-Larsson will play behind him, then prospects Jack Rathbone and Olli Juolevi will battle it out for the third pairing, with Rathbone the presumptive winner of that battle.

Heading into free agency, the right side was another story entirely. The trade of Nate Schmidt to the Winnipeg Jets cleared up cap space but also left a gaping hole in the Canucks’ defence corps.

Let’s start with Poolman, who played top-four minutes for the Winnipeg Jets last season, including a significant amount of time on the top pairing alongside Josh Morrissey. He’s not, however, ideally suited for such a big role and is likely a better fit on a third pairing.

When looking at Poolman’s isolated impact heatmap from HockeyViz, he looks decent enough defensively, but has a significant negative impact offensively. 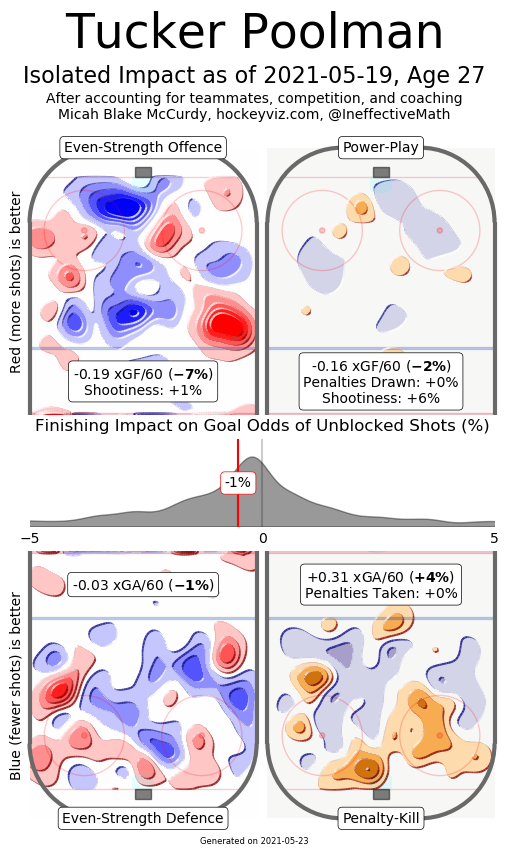 With offensive impact numbers like that, it’s no wonder Poolman had no goals and just one assist in 39 games last season.

While it makes sense to have a defensively-responsible defenceman on the right side to play with the more offensive-minded Hughes, Ekman-Larsson, and Rathbone, the concern is that Poolman’s inability to move the puck would limit their offensive upside.

Still, Poolman has decent size and mobility and can certainly play a role on a third pairing and, in a pinch, play higher up the lineup. If the Canucks can keep him in a third-pairing role, Poolman should be just fine.

Travis Hamonic comes back to the Canucks on a shorter deal than Poolman but a higher cap hit. The veteran defenceman signed with the Canucks last year on a one-year deal worth $1.25 million. This time around, he gets two years at $3 million per year.

Hamonic has a track record in his career as a solid top-four defenceman but struggled last season with the Canucks. Among the Canucks’ regular defencemen, Hamonic had the worst expected goals percentage at 42.18% — the Canucks were significantly outchanced when he was on the ice at 5-on-5.

That’s a problem because he was on the ice a lot as the regular partner for Quinn Hughes. The pairing didn’t work anywhere near as well as the Canucks had hoped.

Hamonic’s defence impact was very poor last season, better than only Jalen Chatfield. That played a role in Hughes looking even worse defensively than he otherwise would. 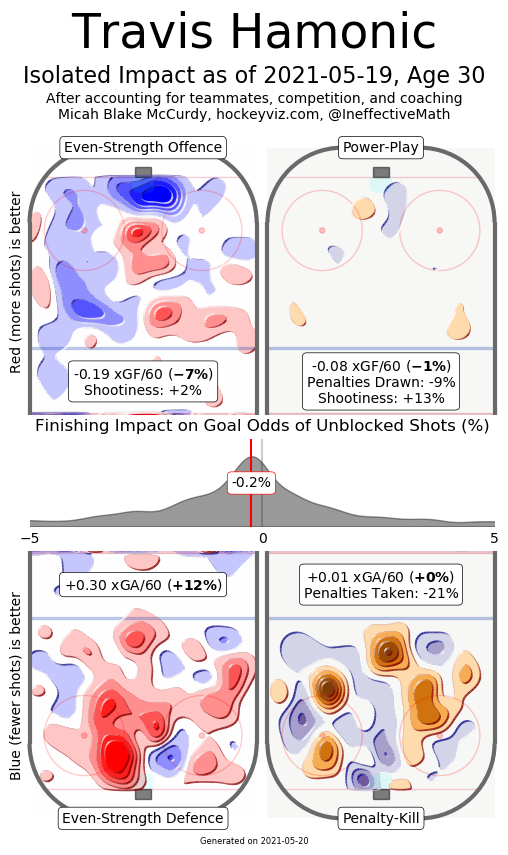 With all that in mind, a $3 million cap hit is a little tough to swallow. There is, however, some additional context worth considering.

Hamonic came into last season having completely missed all of training camp. He hadn’t played an NHL game in over 11 months after missing games due to injury and opting out of the 2020 playoff bubble because of family concerns.

The hope is that the 30-year-old defenceman can bounce back with a full offseason, a proper training camp and preseason to ramp up, and no rust from missing so many games. If he can somehow find his form again from a few years ago, Hamonic can be a very solid top-four defenceman.

The Canucks are also comfortable with Hamonic’s character and his fit with his teammates. Hamonic has enjoyed the fit as well.

“When I take a look at myself personally and how much I've enjoyed playing the game this year surrounded by this group of guys and especially under Greener — he's a really good coach, in my opinion and he's kind of let me have a role and I've been able to run with it,” said Hamonic towards the end of last season.

It seems likely that Hamonic will once again be paired with Hughes. Hopefully their familiarity with each other will lead to better results next year.

Finally, there’s Luke Schenn, who returns to the Canucks on a two-year deal after winning a couple of Stanley Cups with the Tampa Bay Lightning. 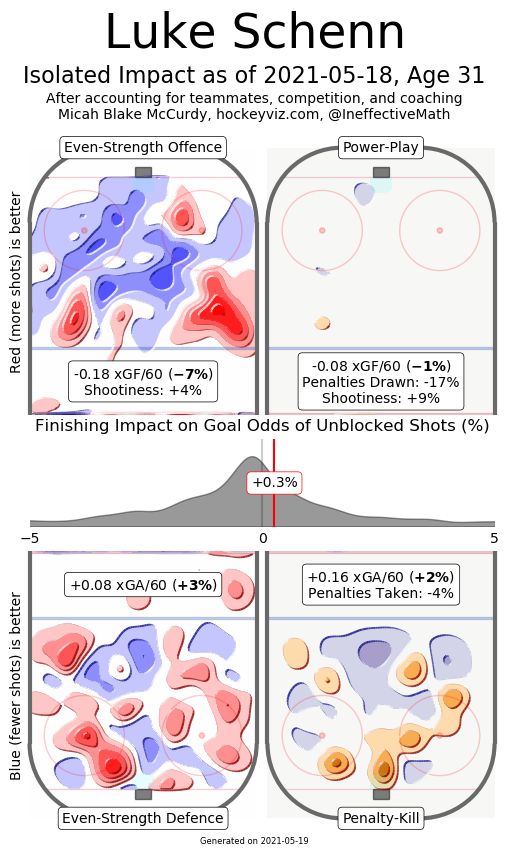 Schenn earned himself some fans in Vancouver in his first 18-game stint with the Canucks thanks to his hit-heavy brand of hockey. If he gets into games with the Canucks next season, he’s likely to do it again.

Did the Canucks defence get better or worse?

The question for the Canucks is whether they’ve actually improved defensively.

Here are the Canucks pairings from the start of last season:

Here are the presumptive pairings to start next season:

Is that an improvement? It’s hard to say. A lot will depend on whether Ekman-Larsson can rebound from a few rough seasons defensively with the Arizona Coyotes. Certainly, that right side does not look better than last season.

The initial response from some Canucks fans isn’t particularly optimistic.