The Canucks sent the Coyotes their ninth-overall pick, 2nd and 7th-round picks, along with veterans Antoine Roussel, Jay Beagle, and Loui Eriksson.

Jim Benning promised an aggressive offseason. Heading into the 2021 NHL Entry Draft, the Vancouver Canucks GM has certainly delivered on that promise.

With a mandate to make the playoffs, Benning swung for the fences on a blockbuster trade that should make them better next season but could also hamstring their salary cap for years to come.

Benning sent the Canucks’ first-round pick this year, a second-round pick next year, a seventh-round pick, and a trio of salary dumps — Antoine Roussel, Jay Beagle, and Loui Eriksson — to the Arizona Coyotes for Conor Garland and Oliver Ekman-Larsson.

Let’s start with what the Canucks get.

Conor Garland is a legitimate play-driving top-six winger with a gritty, heart-and-soul style of game. He forechecks hard to create turnovers and has the speed, stickhandling, and playmaking to create offensive opportunities out of those turnovers. He’s also just 25 years old, so fits in with the age range of the Canucks’ core group.

Garland had 39 points in 49 games last season to lead the Coyotes in points per game and his underlying puck possession numbers are sterling. He drives possession into the offensive zone and creates dangerous chances for himself and his teammates. 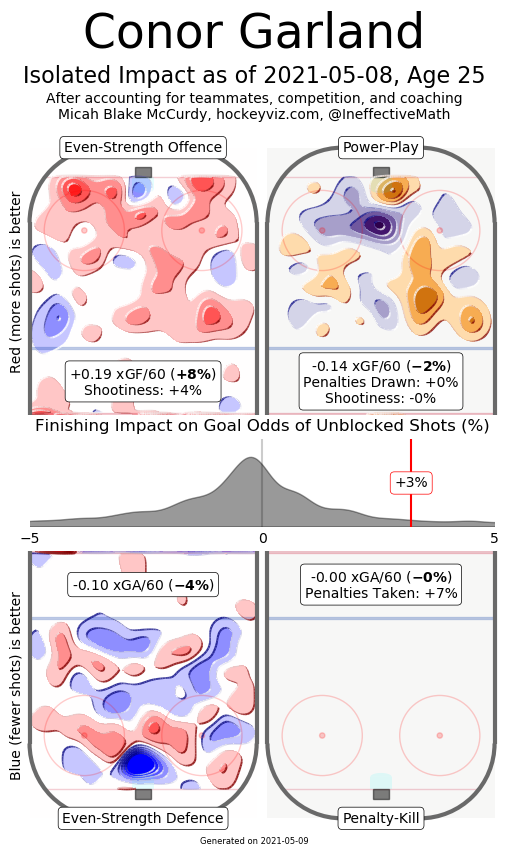 It’s easy to see how Garland could immediately slot in on the second line on either side of Bo Horvat, bumping Tanner Pearson or Nils Höglander to the third line. That’s an immediate boost to the team’s top-six forward group.

Garland is, however, a restricted free agent with arbitration rights, who is due a significant raise from his bargain-basement $775,000 cap hit last season. Contract projections from Evolving Hockey predict a four-year deal with a cap hit of ~$4.7 million per year.

Oliver Ekman-Larsson, on the other hand, has been on the decline for several years. He’s far from the Norris-caliber defenceman he was in his prime at this point in his career.

Still, there are things to like about Ekman-Larsson. He’s consistently put up 40+ points per season in his career, including last season, when he scored at a 43-point pace if it had been a full 82-game season. He has averaged over 23 minutes per game throughout his career, while playing in all situations. He's a smooth skater with decent size.

There are a couple of major concerns, however. His underlying numbers are, quite frankly, ugly. His defensive impact is abysmal, he doesn’t drive play offensively, and he’s mediocre on the penalty kill. 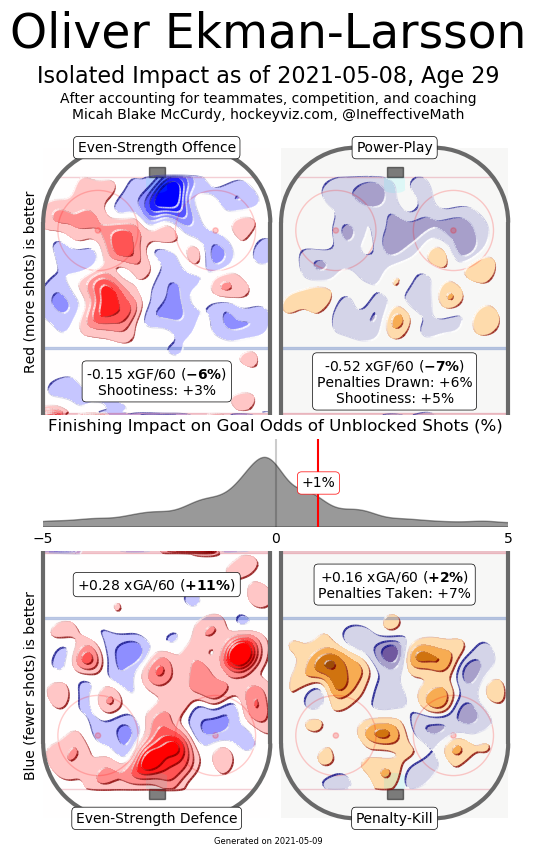 His one saving grace is that he’s typically put up a lot of points on the power play. In Vancouver, however, he’s unlikely to get any time on the first unit with Quinn Hughes ahead of him.

At 30 years old, Ekman-Larsson is unlikely to significantly improve in the future, barring a miraculous change-of-scenery boost. That’s a major problem, because he’s signed through 2027.

That brings us to what the Canucks sent to Arizona.

Roussel, Beagle, and Eriksson combined for a $12 million cap hit next season, but each had just one year remaining on their contracts. The Canucks could have accepted the pain of playing out the final year of each of those contracts, knowing that they might struggle next season. Instead, they sent all three to the Coyotes.

It’s entirely likely that Ekman-Larsson and Garland will take up the entirety of that $12 million cap hit, so there’s potentially no actual cap savings involved. As has been said in the past, you can’t get out of bad contracts if you keep adding new ones.

The real loss, of course, is the ninth-overall pick. The Canucks had the potential to draft a forward or a defenceman who could play a big role for the Canucks for many years, such as Kent Johnson or Brandt Clarke. The second-round pick could prove costly as well — the Canucks have Höglander and Thatcher Demko on the roster from second-round picks.

Overall, the Canucks likely made themselves better for next season. Garland significantly improves their top six and, if he has a bounceback season, Ekman-Larsson could theoretically be an improvement on the departing Alex Edler.

The question is whether the long-term cost is worth that improvement. The risk of Ekman-Larsson’s contract to hurt the Canucks in the future is significant and the trade comes at the cost of the ninth-overall pick, which would have been a major boon to the Canucks’ depleted prospect pool.

Considering Ekman-Larsson’s declining play and hefty contract, the cost seems far too high for the Canucks.

The Canucks will be the first visitors to Seattle for Kraken’s home opener next season
Jul 21, 2021 6:48 PM

Weird Draft Stories: The Canucks prospect who was drafted four times yet never played in the NHL
Jul 19, 2021 2:26 PM