The Canucks found the third-line centre they were looking for ahead of the Seattle Kraken expansion draft.

It was a miniature trade deadline for certain NHL teams on Saturday. With the Seattle Kraken expansion draft next week, teams were looking to move players the Kraken might take for assets instead of losing those players for nothing.

The Canucks, who have more spots on their protection list than they have players worth protecting, were involved in trade talks leading into this deadline. It was a clear opportunity for the Canucks to upgrade their roster at a low cost — they could easily acquire a player and add them to their protected list.

Minutes before the deadline, the Canucks did just that, acquiring shutdown centre Jason Dickinson from the Dallas Stars for their third-round pick in the 2021 NHL Entry Draft.

With Brandon Sutter heading to free agency and the cupboards bare at centre, the Canucks were looking to add a third-line centre with size and defensive responsibility this offseason. Failing to do so likely would have meant playing J.T. Miller at centre, robbing the top line of a key contributor.

Dickinson fits the bill for the Canucks. He’s 6’2” and 201 lbs, has been among the Stars’ leaders in ice time on the penalty kill over the last several seasons, and is still just 26, so fits in the age group of the Canucks’ core.

Dickinson is an intelligent player with good wheels that is always on the right side of the puck defensively. While he hasn’t shown as much offence as the Stars might have hoped when they made him a first-round pick — he had just 15 points in 51 games last season — his skill with the puck is an asset defensively, as he doesn’t just throw the puck away or dump it out but looks to transition the puck up ice with control.

According to Evolving Hockey’s Wins Above Replacement (WAR) model, Dickinson was legitimately one of the best defensive forwards in the NHL last season. He ranked fifth among forwards in even-strength defence by that model.

Likewise, Dickinson looks excellent defensively by HockeyViz’s isolated impact model. By that model, Dickinson made opposing team’s shots 8% less dangerous than average when he was on the ice at 5-on-5. 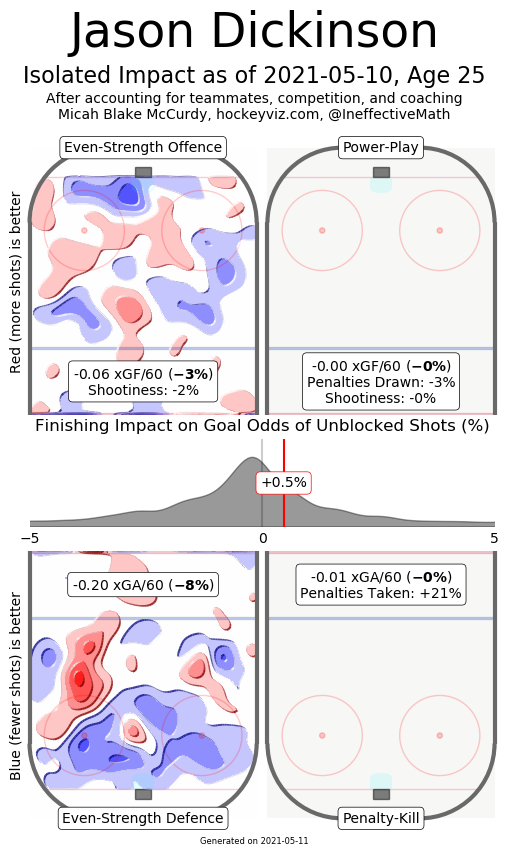 The caveat is that Dickinson doesn’t provide much offensively. While he put up points as a teenager in the OHL and had some strong AHL seasons, it hasn’t translated to the NHL, where he has a career high of 22 points in 67 games in 2018-19.

Still, Dickinson’s production is about what you would expect from a third-line centre, especially since it comes almost entirely at even strength. Heck, his 15 points last season would have ranked 7th among Canucks forwards.

Also, every once in a while he’ll show a flash of unexpected scoring touch that is always nice to see from a defensive centre.

Besides, the offensive upside to acquiring Dickinson isn’t from Dickinson himself. If Dickinson can take on a heavy defensive load — defensive zone faceoffs, matching up against top lines, killing penalties — that frees up other players to do more offensively.

Having Dickinson as the third-line centre allows Miller to play left wing on the top line with Elias Pettersson and Brock Boeser for starters, but it also potentially eases the burden on Bo Horvat. The Canucks captain has been somewhat miscast as a match-up centre — he’s not quite as good defensively as you need that type of player to be — but has shown that he’s far more adept offensively than anyone expected when the Canucks drafted him in 2013.

Dickinson is also known for his character and leadership. He was a captain in the OHL and has been the Stars’ NHLPA representative for a couple of years.

During the 2020 playoffs, when Ryan Reaves of the Vegas Golden Knights kneeled for the anthem in support of Black Lives Matter, Jason Dickinson was one of three players who joined him, along with Stars teammate Tyler Seguin and Golden Knights goaltender Robin Lehner.

“I have people of colour in my family,” said Dickinson. “My dad comes from the islands and one of my uncles is Black. It was easy for me, easy decision. I was thinking about it since everything started if I would do that. I think I was probably nervous to think about doing it on my own. When [Seguin] said it, it was kind of a no-brainer for me. I wouldn’t be alone doing it and support the cause, and support my teammate is a no-brainer.”

When asked after the game what he was supporting, Dickinson was forthright on the matter.

“Black Lives Matter, equality, justice. You can pick the term, it doesn’t really matter,” said Dickinson. “I don’t need to sit here and take a stab at all issues. Just educate yourself, look into things, watch documentaries, talk to people. Just learn, try to open your mind a little bit, and this is a big issue that needs to be addressed.”

When the players held out during the playoffs in support of Black Lives Matter, causing the NHL to postpone and reschedule games, Dickinson stood alongside Reaves with Horvat.

The cost of acquiring Dickinson — a third-round pick — is fairly negligible. While Canucks GM Jim Benning has been far too willing to trade away draft picks in the past for reclamation projects, Dickinson isn’t a project — he’s a solid NHLer.

There will still be an additional cost for Dickinson, however. The centre is a pending restricted free agent, so will need a new contract.

Contract projections from Evolving Hockey predict a three-year deal for Dickinson worth approximately $2.8 million per year. That’s not unreasonable and certainly cheaper than the contracts for their other bottom-six centres, Brandon Sutter and Jay Beagle, but hopefully the Canucks can get him re-signed for a little less to ease their cap burden and leave room to upgrade their defence.

Oilers willingly made themselves worse with Duncan Keith trade, which is great for the Canucks
Jul 12, 2021 2:04 PM

Canucks will welcome Kraken to the NHL with first preseason game
Jul 9, 2021 11:28 AM
Comments