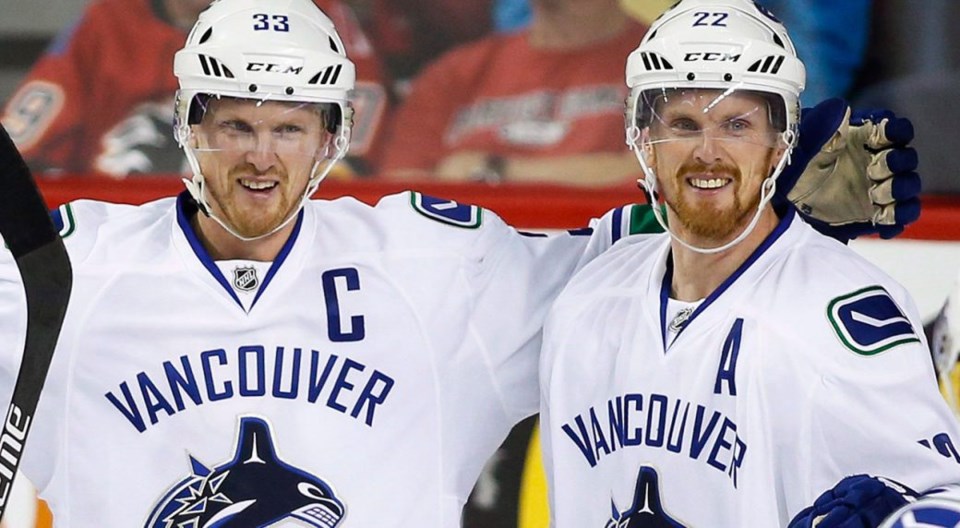 Daniel Sedin took hundreds of crosschecks to his back in his 18-year career with the Vancouver Canucks. Does your back eventually get used to that treatment?

“Yeah, I mean, I had back surgery,” said Daniel with a rueful smile. “So that's what happens.”

In the wake of Matt Grzelcyk’s late hit on Elias Pettersson, more attention than ever is being paid to the physical price paid by the NHL’s star players. During Saturday’s game on Hockey Night in Canada, Scott Oake and the rest of the broadcast team highlighted just how much abuse Pettersson took without drawing a single penalty.

This is nothing new for Canucks fans, of course. Daniel and Henrik Sedin, whose numbers will be retired by the Canucks on Wednesday, faced similar attention throughout their careers in Vancouver.

The Sedins were crosschecked, hooked, and held far more often than penalties were actually called. They took some dangerous and heavy hits throughout their career and played through some injuries and sat out with others. What they played through, Pettersson and the Canucks’ other young stars now face too.

“If you're a top player in this league and you produce points and goals, they're going to come after you,” said Henrik on Monday morning. “You've just gotta deal with it, just you keep your head on a swivel, and keep playing the same way. Just make sure you're ready when they come after you.”

That was a bone of contention for Pettersson after the Grzelcyk hit. He was ready to be hit after passing the puck, but he relaxed after two seconds had passed and was completely unprepared for the late hit. Perhaps that’s the lesson: never relax.

"Young, skilled players, they all go through that. They battle through it, they learn from it as they go, and [Pettersson] is no different from anyone else."

According to Henrik, scoring is the best deterrent.

“The refs are going to call the the power plays when when they see something,” he said. “It's up to you to score that's the only way to get them to back off of you.”

Daniel suggests that the physical price players pay has changed since they were in the league.

“It was a different game too, I mean back then you had those big defensemen that would just grab you and hold you, you couldn't move,” said Daniel. “Now it's not that kind of game.

“He's gonna get slashed, he's gonna get whacked, more those kinds of things. We were more like someone would wrestle you down.”

Daniel echoed Henrik’s comments about being ready to deal with the physicality when it comes.

“He's gonna get used to it,” said Daniel. The main thing is to compensate, that’s the way he has to look at it.”

Hopefully Pettersson won’t need back surgery in the future.