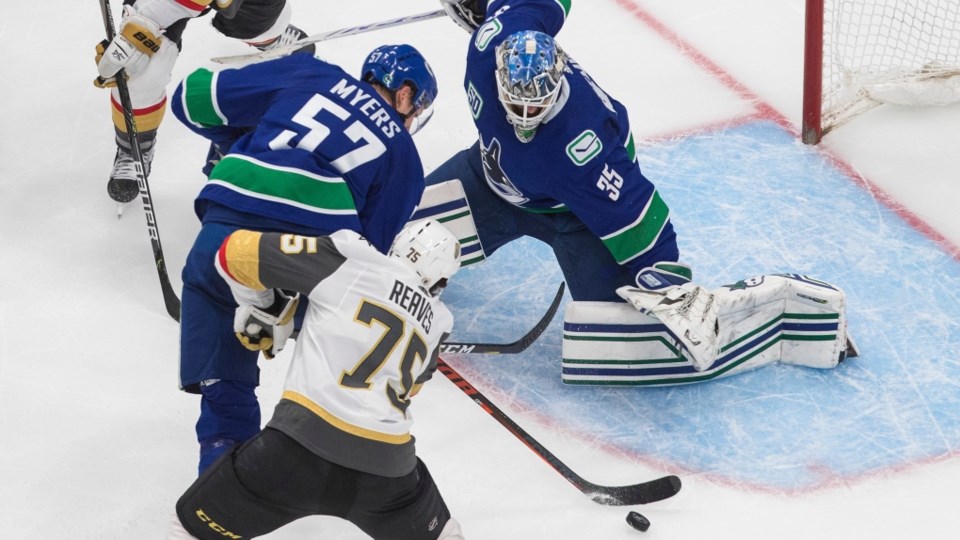 The Canucks' Thatcher Demko stretches out to make a save as Tyler Myers checks Ryan Reaves of the Vegas Golden Knights. photo: Jason Franson, CP

Against the Vancouver Canucks in the second round, the Vegas Golden Knights looked nearly unstoppable.

Unstoppable, that is, until they faced Thatcher Demko.

The Golden Knights were a clear Stanley Cup contender and the odds-on favourite to go to the Finals out of the Western Conference. They never made it, instead falling in five games to the Dallas Stars, partially thanks to their offence going AWOL at the absolute worst time.

Max Pacioretty and Jonathan Marchessault didn't score a single goal and each managed just one assist in the series. Alex Tuch, who was a killer against the Canucks, couldn't find the back of the net against the Stars. Mark Stone had a two point night in Game 3, but didn't record a single point in the other four games. Reilly Smith was held pointless until Game 5, but his one goal was too little, too late.

In the five games against the Stars, the Golden Knights had just 8 goals, an average of just 1.6 goals per game. That’s a far cry from their offensive dominance heading into the series — they were averaging 3.27 goals per game prior to facing the Stars.

Golden Knights head coach Pete DeBoer gave credit to the Stars and goaltender Anton Khudobin for their part in shutting down the high-powered Vegas offence, but also suggested a young Canucks goaltender played a role.

“There’s no doubt that the last couple games of the Vancouver series against Demko rattled our confidence a little bit in that area as a group,” said DeBoer. “Honestly, up until that point, I thought we were creating a ton of offence, we were scoring a lot of goals. It was never an issue.”

Demko started just three games in the playoffs after an injury to Jacob Markstrom, but he was absolutely brilliant in those three games. The Golden Knights peppered him with 125 shots in three games, but could only score two goals.

By Game 7, with Demko once again shutting the door against a relentless Vegas attack, the Golden Knights began to look visibly confused and frustrated at their inability to put the puck in the net, despairing that they might never score again.

Getting shots on goal wasn’t the problem for Vegas — they averaged 33.2 shots per game against the Stars — but scoring goals definitely was. Their inability to get even one more goal cost the Golden Knights the series, as all four of the Stars’ wins were by one goal.

The Golden Knights’ shooting percentage dipped to a dreadful 4.8%. Some of that could just be bad puck luck — shots hitting a teammate and going wide or a puck labeled for the top corner hitting the butt end of a goaltender’s stick instead of the back of the net — but sometimes players that lack confidence in their ability to score start putting pucks into the goaltender’s logo instead of finding a gap.

A goaltender making 123 saves on 125 shots in three games, including a 48-save shutout, can really put a damper on your belief in yourself. Just call him Demko Downer.

While the Canucks couldn’t move past the Golden Knights in the second round, they arguably still had a hand in knocking them out of the playoffs.

IWTG: An incredible performance from Thatcher Demko saves the Canucks in Game 5 against the Golden Knights
Sep 2, 2020 1:38 AM
Comments
We welcome your feedback and encourage you to share your thoughts. We ask that you be respectful of others and their points of view, refrain from personal attacks and stay on topic. To learn about our commenting policies and how we moderate, please read our Community Guidelines.