How Canucks rookie Nils Höglander has earned his coach's trust

The key to Nils Höglander’s success isn’t his offensive skill (but it doesn’t hurt).

Nils Höglander has an impressive skillset, with silky smooth hands that let him do magical things with the puck on his stick. And yet, his most impressive play of his rookie season so far wasn’t the least bit fancy: it was pure effort.

On Monday night, as Al Murdoch was still announcing the Ottawa Senators’ goal that made it a one-goal game, Höglander dug in on a scrambled faceoff, winning the puck out of the scrum. He beat his man not with a slick move, but by chipping the puck off the boards, faking to the inside, then skating hard up the outside.

As Nikita Zaitsev skated over to cover for his defence partner, it seemed like the play was over. But Höglander didn’t give up, diving out with one hand on his stick to swipe the puck across to a wide open Tanner Pearson for the 3-1 lead.

It was an incredible play, but his teammates have gotten used to seeing that kind of effort from the young Swede.

“He's done it from day one,” said Tyler Motte. “Throughout camp and early parts of the season, he's come to work. Obviously, he's got some skill, we all saw the highlights from him overseas, but he comes in every day and he wants to work.”

With the assist, Höglander’s on a three-game point streak and it’s easy to get excited about his offensive upside. What has earned Höglander the opportunity to put up points, however, is his effort, work rate, and play away from the puck.

That’s particularly important for Höglander because he’s playing on a line with Bo Horvat and Tanner Pearson, who tend to get used in a match-up role against the best forwards on the opposition. Höglander’s attention to detail means head coach Travis Green hasn’t had to shelter him from those same match-ups.

"He's shown that he can play on the other end of the puck."

Against the Edmonton Oilers, the forward Höglander played against the most at 5-on-5 was Connor McDavid. Against the Montreal Canadiens, it was Brendan Gallagher. On Monday night against the Ottawa Senators, Höglander saw the most ice time against Brady Tkachuk.

Those are all first-line forwards and some of the best players in the NHL. Höglander hasn’t shied away from the challenge.

“I think at the beginning of the year, I wasn’t sure what to expect out of the defensive side of [Höglander’s] game,” said Green. “It’s no secret that I like to use Bo in a role where he’s playing against top lines, he’s that type of centreman. It worried me a little bit before the year started, but we wanted to try it and he’s shown that he can play on the other end of the puck. He knows that he has to play well when he’s playing with that line, he’s a quick player, he’s learned to play inside the dots in his own zone and also get to puck battles when he has to.”

The numbers bear out Green’s observations that Höglander can play well on the defensive side of the ice. Among Canucks that have played all eight games this season, Höglander is second on the team behind only Horvat in expected goals against per 60 minutes, a statistic that combines shot quantity and quality.

In other words, Höglander isn’t just playing against tough competition, but, with his linemates, has been able to limit scoring chances for the opposition. That makes him the right winger for the Horvat line.

“As long as he can keep taking care of the defensive end and his details that way and show improvement like he has, he’s a good fit [for that line], because he can provide a spark offensively as well,” said Green.

Höglander brings more offensive flair than Horvat and Pearson saw on their wing all of last season. He’s growing in confidence as well, willing to try more with the puck. When asked if he feels as confident now in the NHL as he did in the SHL in Sweden, Höglander didn’t hesitate.

“Yeah! That’s my game, I have confidence,” said Höglander after the game. “I know if I play with that, I play good.”

Among Canucks that have played all eight games this season, Horvat, Pearson, and Höglander lead the Canucks in corsi percentage — the ratio of shot attempts for and against at 5-on-5. In terms of expected goals, Höglander is at 55%, just behind Horvat for the team lead. When that line is on the ice, they have out-shot and out-chanced their opposition to an impressive degree.

That is reflected in Höglander’s isolated impact heatmap from HockeyViz, which accounts for a player’s context on the ice, like usage, quality of teammates, and quality of competition. When Höglander has been on the ice for the Canucks, he’s made opposition shot attempts 3% less dangerous than average, while making Canucks shots 4% more dangerous. 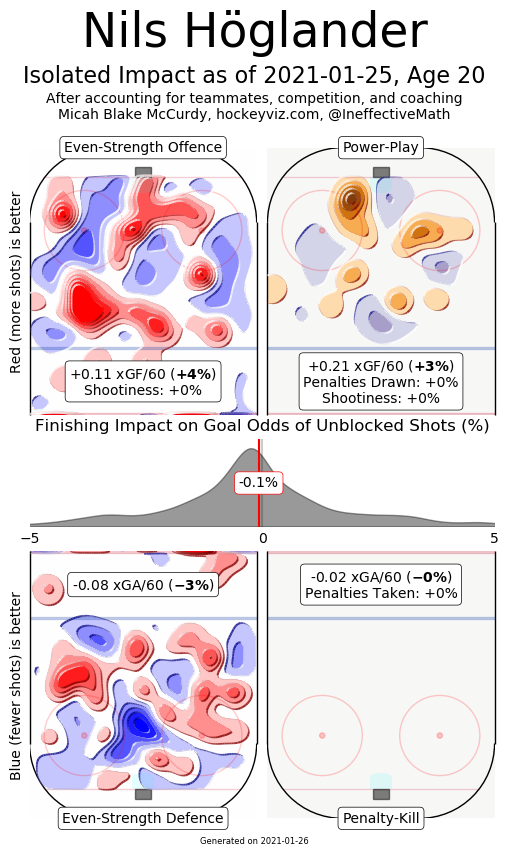 While this is still a small sample size, that’s an encouraging sign for Höglander’s rookie season that he's not just a flash in the pan. He isn’t just picking up a few points, but having a legitimate two-way impact on puck possession and scoring chances.

A big reason for that impact in the offensive zone is the same as his impact in the defensive zone: work rate, effort, and willingness to battle despite — or perhaps because of — his 5’9” stature.

That was evident from the penalty he drew against the Senators on Monday: he went to the front of the net and withstood the assault from defenceman Christian Wolanin that ended with a crosscheck to the back of the head.

While Höglander certainly hasn’t been perfect — few rookies are — he’s earned himself a long leash from his coach.

“He’s going to have games where he might miss a few little details or something within our structure, but that’s going to happen with a young player,” said Green. "You’ve got a lot of time for young guys when they work extremely hard and compete hard and they want to get better and he seems to have those qualities right now.”

IWTG: Nils Höglander gets le but in debut and Brock Boeser tallies two as Canucks top Oilers
Jan 14, 2021 12:47 AM