What are reasonable expectations for Nils Höglander's rookie season?

Canucks rookies have set a pretty high bar over the past three seasons.

Canucks rookies have set a pretty high bar over the past three seasons.

In the 2017-18 season, Brock Boeser scored 29 goals in just 62 games, led the Canucks in scoring, won the accuracy shooting competition and was named All-Star Game MVP, and finished second in Calder voting.

In 2018-19, Elias Pettersson also led the Canucks in points and won the Calder Trophy with 66 points in 71 games, which led all NHL rookies and set a franchise record for rookie scoring.

Last season, Quinn Hughes led all rookies in scoring as a defenceman, something that hadn’t been done since Brian Leetch and Bobby Orr. He was fifth among all defencemen in scoring, but finished second in Calder voting to Cale Makar, then set an NHL record in the playoffs for the most points by a rookie defenceman.

That’s three incredible rookie seasons, three of the best in Canucks history. Arguably only Pavel Bure had a better rookie season than these three phenoms.

"I do try to taper expectations."

“There's been some pretty good players come through here the last few years,” said Canucks head coach Travis Green before Wednesday’s season opener. “I don't compare any of them at all. I don't compare Boeser to Petey or Petey to Huggy and I'm not going to do that with these two young guys that are going to get to play their first game tonight.”

Höglander himself talked about not getting too far ahead of himself with setting goals and expectations for the coming season.

"I just try to take it one day at a time," said Höglander. "Of course it's a goal to make the team and after that, I take my next goal and see what happens."

Höglander did indeed take his next goal. He went out in his Canucks debut and immediately looked like a bona fide top-six winger. He played against the Connor McDavid line, set up multiple scoring chances for his teammates, and scored the first goal of his NHL career.

Obviously hoping for a season like we saw from Boeser, Pettersson, or Hughes is too much. Hoping for a fourth-straight Calder nomination feels a bit strong too. At the same time, what if that’s exactly what Höglander is capable of this season?

“I do try to taper expectations,” said Green. “I think the biggest thing for me is go out and have fun and play your best game. Play with energy, play with passion, and we'll figure out the rest as we go. They don't have to worry about anything other than how they look tonight, how they play tonight. And for us, we don't want to put extra pressure on these young guys. Just play your best hockey and everything else will take care of itself.”

Höglander certainly played with energy and passion. Beyond his goal, he was involved at both ends of the ice, and didn’t shy away from puck battles or the front of the net. In fact, he won the majority of his puck battles, showing impressive core strength and competitive desire. He was good enough that one might wonder if Green himself adjusted his expectations for the young rookie.

“He was really good tonight,” said Green after the game. “He was strong both ends of the rink, strong on the puck, made some nice plays — very happy with his game.”

So, what exactly should be the expectations for Höglander’s rookie year?

To try to answer that question, I looked at two of Höglander’s seasons in the SHL — this current season and last season — to try to find some comparable players to see how they performed in their rookie seasons in the NHL.

I mainly looked for more recent players to get a more accurate comparison, then threw in Loui Eriksson for fun, as his point production at 19 in Sweden was similar to that of Höglander. 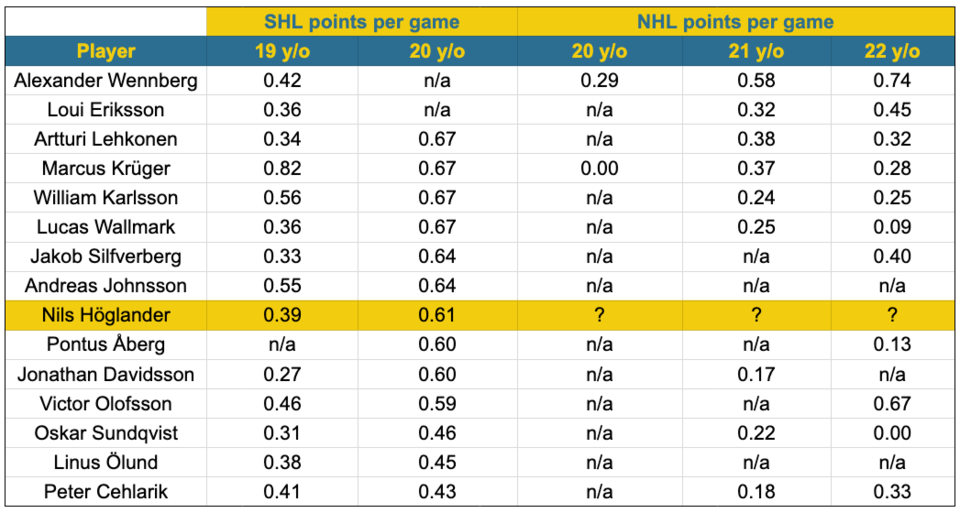 Comparable players to Nils Höglander from the SHL to the NHL.

There are some encouraging names among the players with similar points per game in the SHL to Höglander, including several bona fide first-line forwards like William Karlsson and Jakob Silfverberg. Andreas Johnsson and Victor Olofsson both have 20-goal seasons in the NHL, Alexander Wennberg is centring the Florida Panthers’ second line, and Oskar Sundqvist played a crucial role in the St. Louis Blues’ Stanley Cup victory in 2019.

All-in-all, this is an intriguing group of comparable players, with only a few outright busts among them. There’s only one real issue: it doesn’t help us much for coming up with expectations for Höglander.

Obviously, there’s an issue here because this is an extremely unusual circumstance due to the shortened 2020-21 season: Höglander is entering the NHL in the middle of his 20-year-old season, rather than coming over to the NHL the year after.

But even with that in mind, not many players that performed like Höglander did in the SHL this season even made it to the NHL at the age of 21 and many that did only played a few games. By making the Canucks out of training camp, he’s already ahead of most of his peers.

Silfverberg didn’t even play a regular season game in the NHL until he was 22 and didn’t score 20 goals in a season until he was 25. Karlsson didn’t make a full-time NHL roster until he was 23 and didn’t break out as a top-six forward until he was 25 with the Vegas Golden Knights. If Höglander can even stick in the NHL for a full season, he’ll be ahead of both of them in his development.

Comparing Höglander to Wennberg and Lehkonen

For useful comparables for this season, Höglander really only has two: Alexander Wennberg and Artturi Lehkonen.

While Wennberg primarily played a depth role for the Columbus Blue Jackets in his rookie season, he did get time on the power play and put up a respectable 20 points in 68 games: 4 goals and 16 assists. That landed him at 27th in the NHL among rookies that season.

Lehkonen put up similar point totals as Höglander at both 19 and 20, then made his NHL debut with the Montreal Canadiens at 21. I like Lehkonen as a comparable as well because he was also a 2nd-round pick, plays on the wing, and is under 6’0” tall.

He spent some time in the top-six and on the power play in his rookie season, and it went well: he scored 18 goals and 28 points in 73 games, good for 10th in goals among rookies and 19th in points.

Those are fine rookie seasons, but you’ll notice that they’re not Calder-candidate, franchise-record-breaking seasons. If anyone is expecting that type of season from Höglander, this is a good time to readjust those expectations.

Splitting the difference between Wennberg and Lehkonen, then pro-rating it over a 56-game season, we get 9 goals and 19 points as an expectation for Höglander. Is that too low? Perhaps, but it’s also legitimate second-line winger production.

Höglander’s rookie debut may have fans boarding the hype train, but keeping expectations reasonable will help keep that hype train running. Even 10 goals this season would be exceeding expectations based on his SHL production; if he can do even better than that, it will be time for some real excitement.

IWTG: Nils Höglander gets le but in debut and Brock Boeser tallies two as Canucks top Oilers
Jan 14, 2021 12:47 AM