"His gap has been better, his stick work's been a lot better, he's been physical when he's needed to."

Coming into the 2020-21 season, the Vancouver Canucks didn’t just want to have one of their young defencemen step into the lineup — they absolutely needed a rookie to play in their bottom pairing.

Olli Juolevi got that opportunity to start the season, then gave way to Jalen Chatfield, whose smooth skating, stay-at-home style, and right-handed shot made him a fit alongside Alex Edler. After a disastrous game against the Toronto Maple Leafs where he was on the ice for four even-strength goals against, Chatfield was scratched and Juolevi got another chance.

Juolevi has made good on the opportunity, playing a steady and physical defensive game, while incorporating his strengths as a passer to quickly break the puck out of the defensive zone. It’s made a difference for the Canucks, who have been significantly better on the breakout with Juolevi back in the lineup.

Tyler Myers, who has been Juolevi’s regular defence partner all season, credits their improvement as a pairing not to Juolevi’s passing or skating, but to his vocal cords.

“Olli is getting a lot better at using his voice and I think it’s helping our breakouts a lot more,” said Myers. “He’s playing well for not having a lot of games under his belt and I think he just keeps improving each and every game.”

Finding his voice on the ice has been a matter of confidence for Juolevi as he’s adjusted to the pace of play in the NHL.

“For sure. I think I'm able to see the plays earlier now,” said Juolevi. “Everything is slowing down a little bit and you kinda know what the guys are trying to do. It’s a lot different here when the guys are so smart and skilled, it takes some time to get used to it, but I’m feeling pretty comfortable right now.”

That comfort level has shown up in the numbers. While the Canucks as a team have played better in recent games, Juolevi’s improvement has been particularly noticeable. At 5-on-5, the Canucks have out-shot their opponents 32-to-20 over the last four games, while scoring chances have been 26-to-19, second only to Edler among Canucks defencemen.

“I think he’s just a little more assertive,” said head coach Travis Green about the improvement in Juolevi’s play. “I think he’s had some good work in practice, I think that he’s taken note on some of the things that we’re trying to do that as a young defenceman might be a little bit of an adjustment.

“I think his gap has been better, his stick work’s been a lot better. He’s been physical when he’s needed to. He’s played well.”

That physical aspect of Juolevi’s game came into play on a very noticeable open-ice hit on Matthew Tkachuk during Saturday’s game against the Calgary Flames.

“I think I’m a big guy enough to play physical,” said Juolevi, who is listed at 6’2” and 182 lbs on the Canucks roster. It was certainly enough to sit down Tkachuk, who had taken Juolevi’s feet out in the corner a moment earlier. Evidently, that didn’t play a role in how hard Juolevi chose to hit him.

“It just happened to be him,” said Juolevi. “Of course, I know him quite well. It’s nice to get one of those every now and then.”

Tkachuk and Juolevi were, of course, teammates on the London Knights for the 2015-16 season, which happened to also be their draft year. The Canucks took Juolevi fifth overall. A pick later, the Flames took Matthew Tkachuk. While Juolevi is still working to earn a permanent spot in the NHL, Tkachuk has 99 goals and 245 points in 308 games.

There have been complications, of course. Juolevi dealt with some serious injuries that hampered his development at critical times, including a knee injury that wiped out most of his rookie season in the AHL after a hot start where he had 13 points in 18 games.

"It helps when you're healthy."

Those injuries also hindered his mobility, causing concerns that he might struggle to defend speedy NHL forwards off the rush. His ability to pivot to the outside was a particular concern.

In recent games, Juolevi has demonstrated either his improved mobility or his ability to compensate for a deficiency in his skating with good reads. He’s had a couple of examples where he’s had no issue keeping a good gap and preventing forwards from beating him to the outside.

For example, he tracked Alexander Kerfoot well in a game against the Toronto Maple Leafs, angling him to the outside, then keeping focused on Kerfoot’s chest as he tried to cut inside, easily knocking him off the puck.

Against the Flames, Juolevi showed a strong pivot to the outside while defending Andrew Mangiapane 1-on-1, separating him from the puck with a good sweep check with his stick. When Mangiapane pivots and is able to put the puck in front, Juolevi swings around to cover for Jay Beagle, who lost Mikael Backlund going to the net and is able to get his stick on Backlund’s shot attempt to deflect it high.

“I think it helps when you’re healthy,” said Juolevi with a wry smile. “When your knee is not bad or your back is not bad, it kind of helps with the skating stuff. It just takes some time to get back to it and I’ve been working hard since whenever I got healthy.”

Beyond the improved mobility, Juolevi has been playing to his strengths defensively: getting in lanes and blocking shots. With the Utica Comets in the AHL, Juolevi was a shot-blocking machine on the penalty kill and he’s brought that aspect of his game to the NHL as well, albeit primarily at even-strength.

Juolevi is currently second on the Canucks in shot blocks per 60 minutes, behind only Jordie Benn. Considering his minimal minutes on the penalty kill, which is prime shot-blocking time, and his respectable puck possession statistics, that’s pretty impressive for the young rookie.

You can see what makes him so good at blocking shots on this play against the Flames.

Juolevi tracks back in his zone, taking Milan Lucic as he goes to the net, but as the play develops, Juolevi makes a great read, recognizing the coming shot from defenceman Juuso Valimaki as he jumps up in the play. Juolevi attacks aggressively — there’s the assertiveness Green mentioned — and stays in the shooting lane as he does so, dropping low to one knee to take up as much space as possible.

Overall, Juolevi has had a significant impact defensively for the Canucks, as illustrated by his heatmap from HockeyViz. These heatmaps attempt to isolate an individual player’s performance, taking into account context like teammates, opponents, and usage. 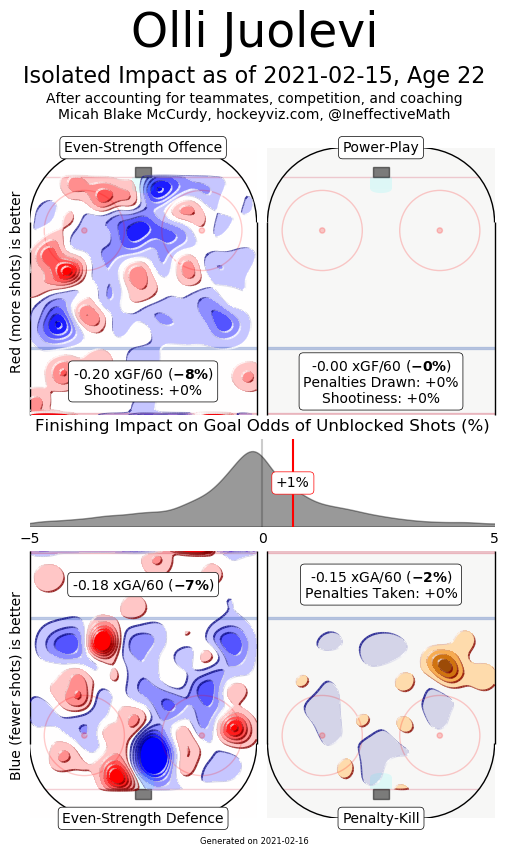 While Juolevi hasn’t had much impact on the offensive side of the ice, he’s been strong defensively, defending the slot and his right side of the ice particularly well.

Overall, it’s been a strong return to the lineup for Juolevi and provided a steady partner for Myers, who has looked better with Juolevi in the lineup. While it would be nice to see a larger offensive impact from Juolevi, who has the vision and passing to create better scoring chances than he has so far, his defence was the main concern heading into the season.

“I think it helps the more games you get into in your career. Every game, you try to learn something,” said Juolevi. “I just want to try to get better every day and I’m feeling really good right now.”

A confident Olli Juolevi is finally ready for his rookie season with the Canucks
Jan 7, 2021 1:38 PM

The Canucks desperately need one (or both) of their goaltenders to start stealing wins
Feb 16, 2021 5:34 PM