THE FARMHOUSE: Olli Juolevi showed signs of life in Utica this season

Juolevi took some steps this season, but they weren't always fast ones.
Cody Severtson Mar 18, 2020 9:49 AM

I’ve always found it poetic that Sami Salo, the master of frequent and bizarre injuries, became one of the first stewards of Olli Juolevi’s development as a professional hockey player.

After an unspectacular 2017 training camp, Juolevi found himself loaned out to TPS of the Finnish Liiga, where Salo had just started his first season as an assistant coach. The fact that both players came away from the regular season unscathed is nothing short of a miracle.

Juolevi’s season with TPS saw him put up an impressive 19 points in 38 games played, with his 0.5 points-per-game pace placing him 8th among all U20 Liiga players. During TPS’s playoff run, Juolevi picked up an additional two goals and five assists across eleven playoff games.

Although TPS’s playoffs ended with a disappointing bronze-medal loss, Juolevi’s points-production placed him seventh among all Liiga defencemen. Salo praised Juolevi for his great playoffs, and the improvements he had made over the year.

Salo on Juolevi, "He had a really good year, he improved in the areas he needed, like in the defensive zone. He had a great playoff, he carried the team after we lost a key defenseman. He took the team on his shoulders, we were really happy with his development." #Canucks

Salo was, however, blunt and, frankly, prophetic when he discussed what Juolevi needed to do to become an everyday NHLer.

Salo on how close Juolevi is to the NHL, "His play in his own end will be the biggest hurdle I think for him. He needs a big summer, get in better physical shape, conditioning, stronger and quicker. Lots of work to be done, the next styp is big." #Canucks

That big summer of getting in better physical shape would never come as Olli Juolevi’s offseason started about as bad as any offseason could go. A microdiscectomy on his lower back in early June meant Juolevi’s summer training would be put considerably behind in anticipation of the 2018-19 season.

Already off on the wrong foot, Juolevi entered the AHL with lofty expectations preceding him. Though Juolevi had some early growing pains adjusting his skating to the increased pace of play, he managed to pick up one goal and twelve assists in 18 games played. His 0.72 points-per-game placed him first among Comets defencemen and sixth among all Comets players. At one point, Juolevi’s production had him leading all rookie defensemen in the league.

Unfortunately, Juolevi’s rookie season in the AHL got cut short just as it started to get going, when he suffered a knee injury in early December. The injury was initially downplayed as being just a minor knock that Jim Benning suggested would take Juolevi out of action for no more than two to two and a half weeks. But just like a two-goal lead against the Columbus Blue Jackets, things changed quickly.

That minor knock eventually revealed itself to be a meniscus tear requiring surgery. At the time, Jim Benning assured fans that the Canucks fully expected Juolevi to be ready to go for next year’s training camp.

Nine months after Juolevi’s surgery, Benning revealed that Juolevi would be sitting out of the 2019-20 preseason schedule for the purposes of “load management.”

That load management principle lost all meaning, however, once Juolevi made his way down to Utica.

Before a second spate of injuries took him out of action for three weeks, Juolevi was leaned on heavily by head coach Trent Cull. Through the first 14 games of the season, Juolevi was a prominent fixture on both of the Comets’ special teams. As a member of the Comets’ first penalty-killing unit and first powerplay unit, Juolevi logged considerable minutes.

Juolevi was one of six players to play in every one of the Comets’ first 14 games. By my measures, Juolevi averaged the third-highest minutes of those six players with 317.19 minutes played. His 22:39 estimated TOI per-game placed him sixth among all Comets after 14 games played, fourth among d-men. 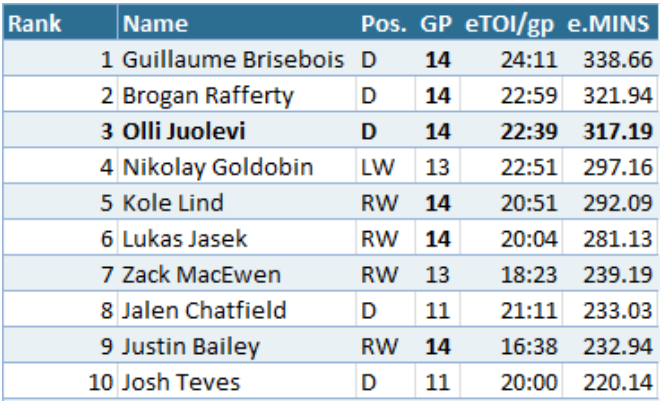 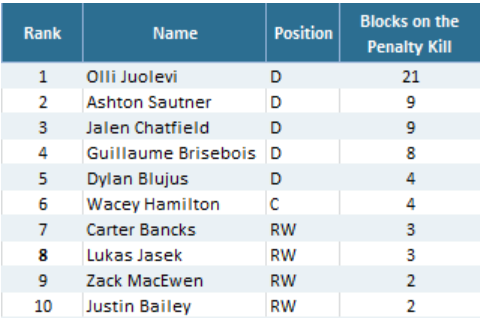 Plays like the one below were commonplace with Juolevi on-ice to face the man-advantage. Despite coming off of a knee injury that jeopardized his summer training, Juolevi was frequently the first player to sacrifice his body for the sake of the team.

While Juolevi’s lack regard for the health and safety of his body is commendable in a way, this reckless abandon, coupled with the workload thrust upon him, might have contributed to the hip-soreness issues that would take him out of action for the following three weeks.

Juolevi, despite recovering from a knee injury, put up decent numbers during his sophomore effort with the Comets. While his production tapered off during his first 14 games, it was after returning from his stint on IR where his 5v5 production began to flourish. After picking up just a single point at 5v5 through his first 14 games played, he then went on to pick up an additional 11 across his next 34 starts.

The above graph shows the progression of Juolevi’s points-per-game over the course of the season, with the red line tracking all points and the dashed green line tracking even-strength points. Each bar on the graph represents a point: even-strength in blue, power play in purple, and shorthanded in yellow.

Juolevi’s 0.56 points-per-game and his 0.27 5v5-points-per-game has him sitting second only to Brogan Rafferty on defensive scoring rates. For outright points-per-game, Juolevi’s production places him eighth among all Comets players, solid production for a defenceman who has had to adapt his playstyle to his weakened skating ability. 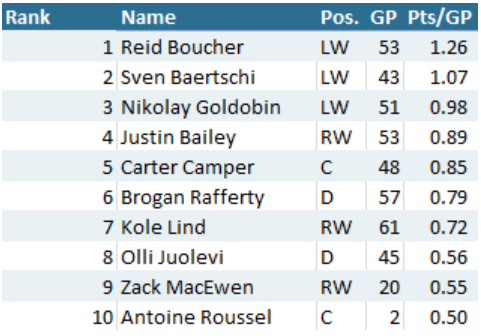 One of Juolevi’s primary assets that has contributed to his impressive points-production is his elite passing and vision. From the start of the 2019-20 season, Juolevi has displayed the same patient and crisp tape-to-tape passing that featured as one of the lone bright spots during his otherwise tragic 2018-19 campaign.

Juolevi’s teammate awareness has led to some gorgeous goals for the Comets. This goal from Francis Perron, for example, begins with Juolevi finding Sven Baertschi with a rink wide slap pass from behind the Comets blue line.

Juolevi’s ability to find teammates with a glance has allowed the Comets to be strong in transition.

You can see his ability to spark the transition game in lays like this one against the Providence Bruins, where, after a long shift, Juolevi strips the puck off of a Bruins forward and immediately turns to find Zack MacEwen with an outlet pass. MacEwen mishandles the puck during the zone entry, but that’s an article for another day.

Not every rink-wide pass attempt is tape-to-tape. At least, not tape-to-tape to the right team. Like this attempt against the Cleveland Monsters, where Juolevi’s pass attempt landed right on Calvin Thurkauf’s stick and nearly into the back of the Comets net.

Along with his passing, Juolevi has a bomb of a shot and some of Juolevi’s best-looking offensive contributions have come from him moving in from the neutral zone to step into a one-timer. For example, this blast off of the goalpost nearly gave the Comets the lead against the Bridgeport Sound Tigers.

It is absolutely worth mentioning that Juolevi’s first goal of the season was, quite possibly, the greasiest goal scored by a Canuck this season.

Would that puck have gone in without Juolevi? Probably. Can we still give Juolevi credit for rotating down low, going to the net, and shoving aside his man to make sure it went in? Yes.

One of Juolevi’s defining abilities as a defenceman is his ability to remain calm under pressure. You can see that poise in plays like this one against the Providence Bruins, where two opposing players pressure Juolevi behind the Comets goal line, but Juolevi doesn’t panic and waits out his foes long enough to make a clean breakout pass.

The only caveat to Juolevi’s defensive game is that it is at its best when he is remaining stationary.

When he's not called upon to move or pivot quickly, Juolevi has a knack for getting in shooting lanes, showing his strong positioning. It's when he needs to move that problems crop up.

It shouldn’t be surprising that the knee injuries have hampered Juolevi’s ability to defend at 5v5, especially off of the rush. His weak pivoting, and inability to accelerate has made him susceptible to getting “walked” by opponents.

In this example from the Comets game against the Wilkes-Barre/Scranton Penguins, Adam Johnson beats Juolevi clean in a foot race, after faking a drop pass off the zone-entry.

In this example from the Comets February 14th game against the Syracuse Crunch, Dennis Yan slips by Juolevi on the blue line. Yan is already at the top of the left-circle setting up for a shot by the time Juolevi has finished his rotation and begun his first stride to catch up.

It is worth noting that Juolevi’s footspeed issues aren’t a new development, brought on solely by knee injuries. He’s never been particularly quick and his footspeed was an issue that stood out last season, like this example from a game against the Syracuse Crunch where Juolevi was beaten in a foot race to the end boards by Syracuses’ Ross Colton, despite Juolevi’s considerable lead.

Despite questionable footspeed, there have been some encouraging signs of improvement as the season progressed. One of the first signs came in a game against the Cleveland Monsters, where Juolevi showed impressive speed on a back check. His stop-and-turn was a bit clunky, but it was his fastest end-to-end skate displayed to that point of the season.

His most impressive backcheck of the season came against the Rochester Americans.

Juolevi’s rush began after pinching down towards the Amerks’ goal-line to complete a centring pass. After the Comets lost possession, Juolevi got on his horse and made an impressive skate back into his zone. Juolevi’s speedy return pressured Kevin Porter towards the outside wall, negating the two-on-one opportunity.

Unfortunately, this encouraging clip of Juolevi’s skating improvement came during his last game (possibly) of the season. Juolevi hadn’t played since the end of February while dealing with “hip soreness,” but was close to returning to play when the AHL suspended play due to the COVID-19 pandemic.

It cannot be stated enough how important Juolevi is to the Canucks organization. Outside of Jack Rathbone and fringe prospects like Toni Utunen or Josh Teves, the depth chart on left defence is decidedly shallow. Jim Benning’s regime cannot afford to see Juolevi’s late flashes of improvement turn out to be mere flashes in the pan.

With sports leagues worldwide on hiatus or outright cancelled due to the outbreak of COVID-19, this indeterminate amount of time presents a chance for Juolevi to fully recover from the hip soreness issues that have plagued him this season.

At the very least, should the AHL season be cancelled outright, Juolevi might finally have a chance to have that “big summer” to get in better physical shape.

Provided he doesn’t follow in Salo’s footsteps and get bitten by a snake, of course.