How much would you pay for this century-old Vancouver Millionaires sweater?

The sweater is currently up for auction if you have several thousand dollars lying around.
Nov 26, 2020 5:39 PM By: Daniel Wagner 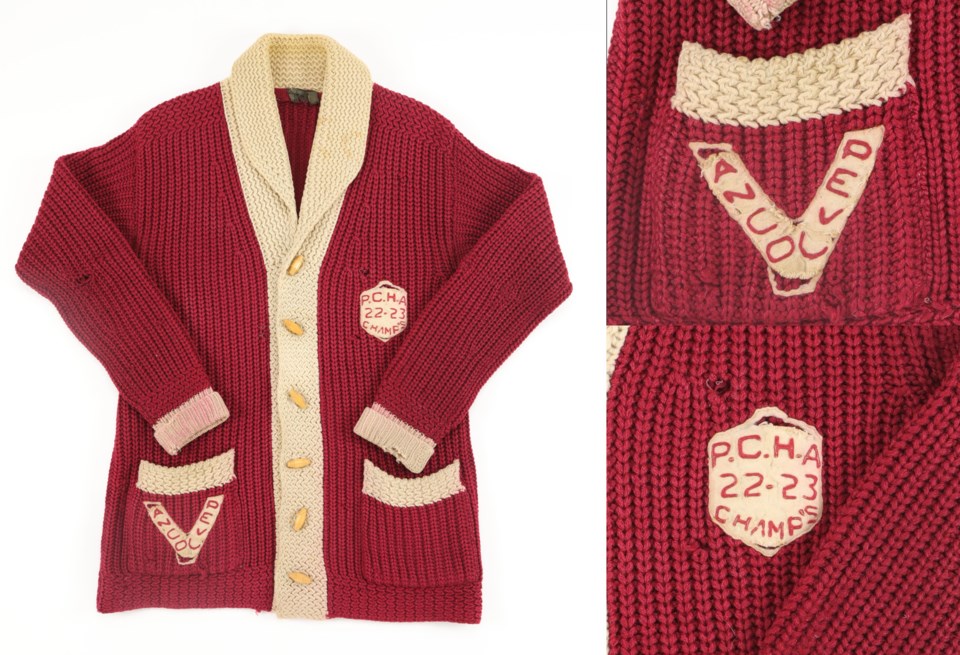 A Vancouver Millionaires sweater from 97 years ago currently up for auction. photo: Lelands.com

Vintage is very in right now, particularly in the NHL.

The entire league just revealed vintage-inspired jerseys for every single team in the league with their Reverse Retro series. Last season, the Canucks brought back their 90’s-era skate jerseys for their 50th anniversary, with fans campaigning for the skate to become a permanent part of the jersey rotation.

Along with the skate, the Canucks wore several other vintage jerseys from their 50-year history throughout the season, wearing the original stick-in-rink, yellow flying-V, and navy and maroon orca in warm-ups for special “Era Nights.” There’s one vintage jersey that they didn’t bring back, however: the beige and maroon Vancouver Millionaires jersey.

Now, if you have five figures to spare, you can buy a truly vintage Vancouver Millionaires sweater: it's nearly a century old.

The Millionaires are the only Vancouver team to win a Stanley Cup, sweeping the Ottawa Senators in three games back in 1915. They played in Vancouver for 11 seasons, then four more as the Maroons before the team folded in 1926.

The Canucks brought back the Millionaires jersey as a special throwback during the 2012-13 season in a game against the Detroit Red Wings, then again for the 2014 Heritage Classic, played against the Senators, who likewise wore a jersey inspired by the 1915 Senators. They wore the jersey one more time against the Colorado Avalanche during the 2014-15 season.

While the Millionaires may have won the Stanley Cup, their jersey seemed cursed for the Canucks. They lost all three games — badly! — and John Tortorella’s decision to start Eddie Lack over Roberto Luongo at the Heritage Classic was the straw that broke the camel’s back for Luongo, who demanded a trade and didn’t play another game for the Canucks.

Even if the jersey is cursed, it hasn’t stopped the Millionaires’ colours and logo from becoming a central part of the Canucks’ merchandising. Any gathering of Canucks fans is sure to feature a hat, shirt, or jersey in Millionaires maroon.

Unfortunately, none of the original Millionaires jerseys, which were actual sweaters at the time, have survived to the present day. No one saw the sweaters as collector’s items — they were athletic wear. They got sweaty, ripped, and snagged, then washed and repaired and sent back out on the ice. Once they wore out, they were discarded. For a sweater from that time to last a century would be surprising.

That’s what makes the Millionaires sweater currently up for auction so special.

No, it’s not the type of sweater the Millionaires wore out onto the ice, but it was worn by a member of the Millionaires. The sweater, up for auction by Lelands Sports Memorabilia and Card Auctions, is one of a small number of sweaters given to the members of the 1922-23 team after winning the PCHA championship.

Technically, that means it’s not a Millionaires sweater, since that was their first season as the Maroons.

The sweater, which somehow still has all six of its original wooden buttons, was displayed at the Kingston Hockey Hall of Fame, where it was said to have belonged to Hockey Hall of Fame goaltender Hughie Lehman. According to Mike Heffner, president of Lelands, that claim can’t be confirmed, even if the sweater itself is authentic and the last surviving of a small number of such sweaters.

“Even considering the coaches, the trainers, everyone else, it was probably a maximum of 15 of these sweaters given out and they were given to the team members and I’m assuming maybe a few VIP team officials with team owners,” said Heffner. “Of those 10 or 15, it's amazing that even one survived.”

Lehman was the goaltender for the 1915 Stanley Cup-winning Millionaires, his first season with the team, and he continued to play for the team until they folded in 1926. The next season, he was the starting goaltender for the Chicago Blackhawks in their inaugural season at the age of 41.

A piece of hockey history like this sweater doesn’t come cheap, particularly since so few authentic sports items from that era still exist. As of Thursday, bidding on the sweater was at $3,137, with Heffner expecting it to top $10,000 before the auction closes on December 11th.

Heffner hopes that someone might buy the sweater and donate it to a museum. If you were to pay that much for the sweater, however, wouldn’t you want to try it on, just once? It’s easy to picture attempting to put the sweater on your torso, only to have Heffner, like Indiana Jones, exclaim, “That belongs in a museum!”

It’s probably for the best to avoid trying to wear the sweater, even if it’s the one opportunity to truly experience just how cozy people were a century ago.

“Something like this sweater, with the historical importance that comes with it, is really quite amazing,” said Heffner. “It belongs in the Hockey Hall of Fame.”