Elias Pettersson has style to spare — 11 of his best fits

Want to cop Petey’s look? PITB breaks down some of his best outfits.

On the ice, Elias Pettersson is as slick as they come, with ridiculous hands that bring to mind the Magic Man himself, Pavel Datsyuk. But Pettersson might be even more stylish off the ice.

NHL players aren’t exactly renowned for their sense of fashion, with just a few notable exceptions. The longstanding tradition of wearing suits on game days limits the ability of players to express themselves with their clothing choices, as does hockey’s culture of emphasizing the team over the individual.

Pettersson, however, can’t help but be himself. When the NHL announced that they would be relaxing dress codes for playoff hockey in the bubble, Pettersson was excited.

“I hope it’s something like the NBA,” said Pettersson, referring to the sometimes flamboyant style of NBA players. “I like to show my personality and show off my style of clothing."

Regrettably, the Canucks instead chose a team “uniform” of boring black sweatpants and team-issued navy blue polo shirts. Not only was it disappointing that Pettersson and the other Canucks couldn’t choose their own outfits to wear to the rink, the Canucks’ look was about as bland and unfashionable as you can get.

Fortunately, Pettersson has found many other opportunities to show off that his fashion sense is nearly as good as his hockey sense. He brought his game both on and off the ice in the playoff bubble and has kept his style game going in the offseason, where he’s even modelled for luxury streetwear brand Off-White Vancouver.

I reached out to Vanessa Jang of The Broadscast to get her opinion on some of Pettersson’s crispiest looks. She’s done some research into Pettersson’s outfits in the past and definitely had some thoughts on his style.

If you want to keep an eye on Pettersson’s style game, the Twitter account @picsofpetey is a must-follow. Now to the looks! 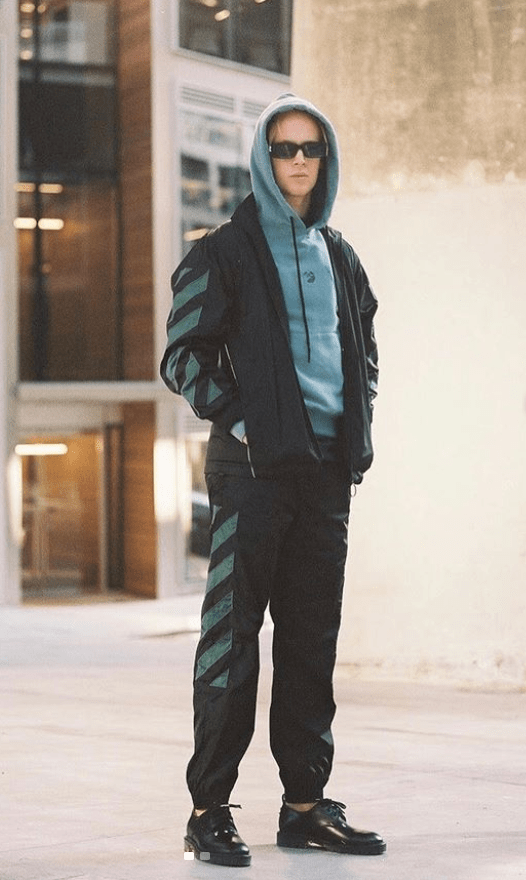 Speaking of the 90’s, this Off-White hoodie and tracksuit combo is definitely reminiscent of a 90’s classic: The Matrix.

“Big Neo vibes,” said Jang. “Don’t like the shoes, but I respect a guy who’s willing to wear them.”

When Off-White Vancouver posted this picture and others of the outfit on Instagram, Canucks Twitter immediately grasped the meme potential of the image, photoshopping him into all sorts of scenarios. Pettersson himself, however, handily won the meme wars, making the Neo connection explicit.

The matching tracksuit will run you $1,855, while the hoodie is $990. Pairing it with some chunky dress shoes and equally-chunky sunglasses? Priceless. 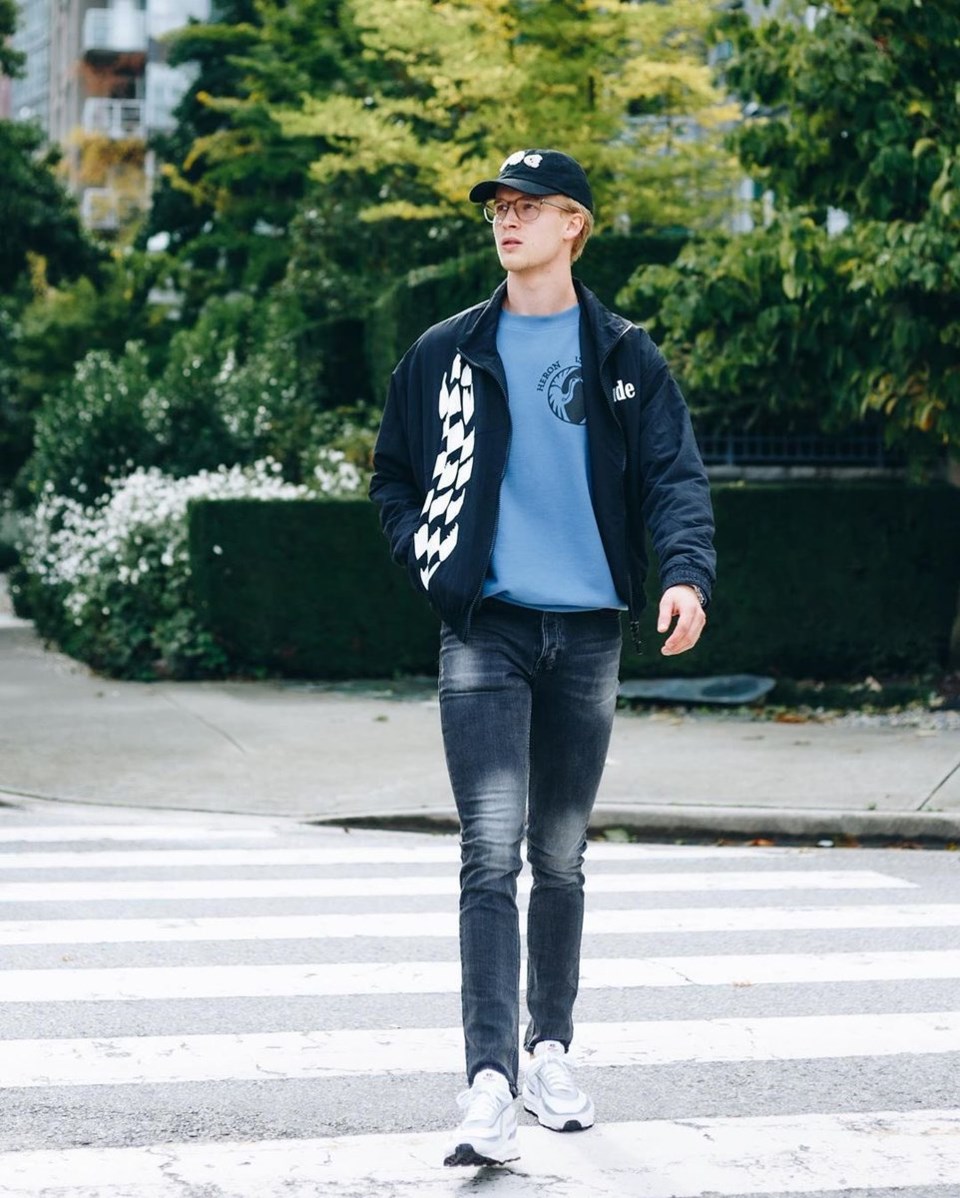 Let’s reel things back from the Matrix and go with a more traditional look: a Heron Preston sweatshirt matched with a Rhude track jacket and some distressed denim. Jang suggested this outfit makes Pettersson look like a fashionable tourist.

“Looks like he hopped off an Alaskan cruise and is prepared to buy absolutely no souvenirs,” she said. Hard to argue with that.

He tops this look off with some thin-frame glasses and his $460 Palm Angels hat, which he appears to wear a lot, which is good. If you’re going to spend that much on a hat, you should get a lot of use out of it.

The Rhude jacket is $715 USD, while the Heron Preston sweatshirt will set you back $620 CAD. 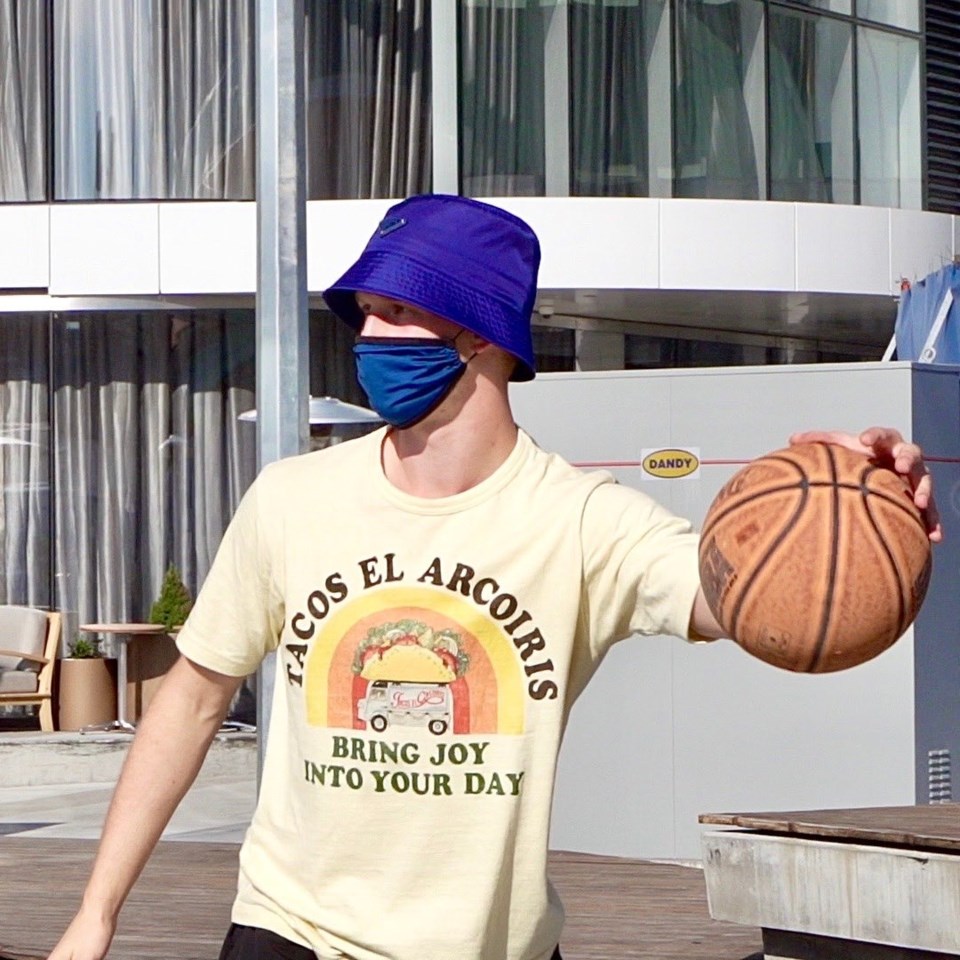 This is clearly the perfect outfit for shooting some hoops in the prison yard. While Jang isn’t a fan of the bucket hat, she had to admit it actually works with this retro taco truck t-shirt.

“I love tacos and yesterday was Tuesday, so Taco Tuesday,” said Pettersson. “I like to be a little different with my style of clothing, that’s why I went with the bucket hat.”

The Junya Watanabe t-shirt is around $330 and the Prada bucket hat is $550, so they might not be everyone’s idea of basketball shoot-around gear, but then again, not everyone can be Elias Pettersson. 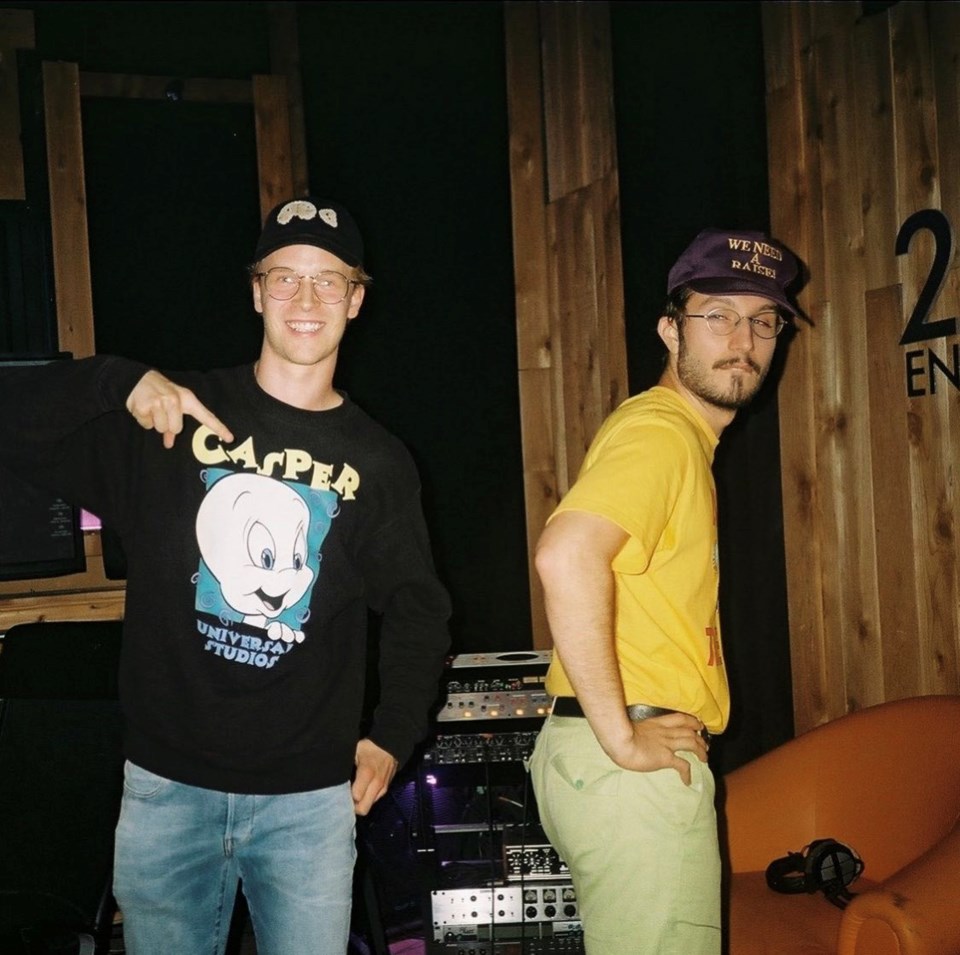 Fashion isn’t just about buying some luxury brand name and calling it a day. Sometimes you’ve got to seek out your own style and Pettersson proves that with this vintage Casper the Friendly Ghost sweatshirt, the perfect outfit for hanging out with Vancouver rapper bbno$ at the recording studio.

“Vintage Petey with glasses is the best Petey,” opined Jang, and it’s hard to disagree.

Pettersson found the Casper sweatshirt at Vintage Finds VanCity, a great place to look for some quality vintage wear. It works perfectly with his faded denim jeans and his Palm Angels hat. 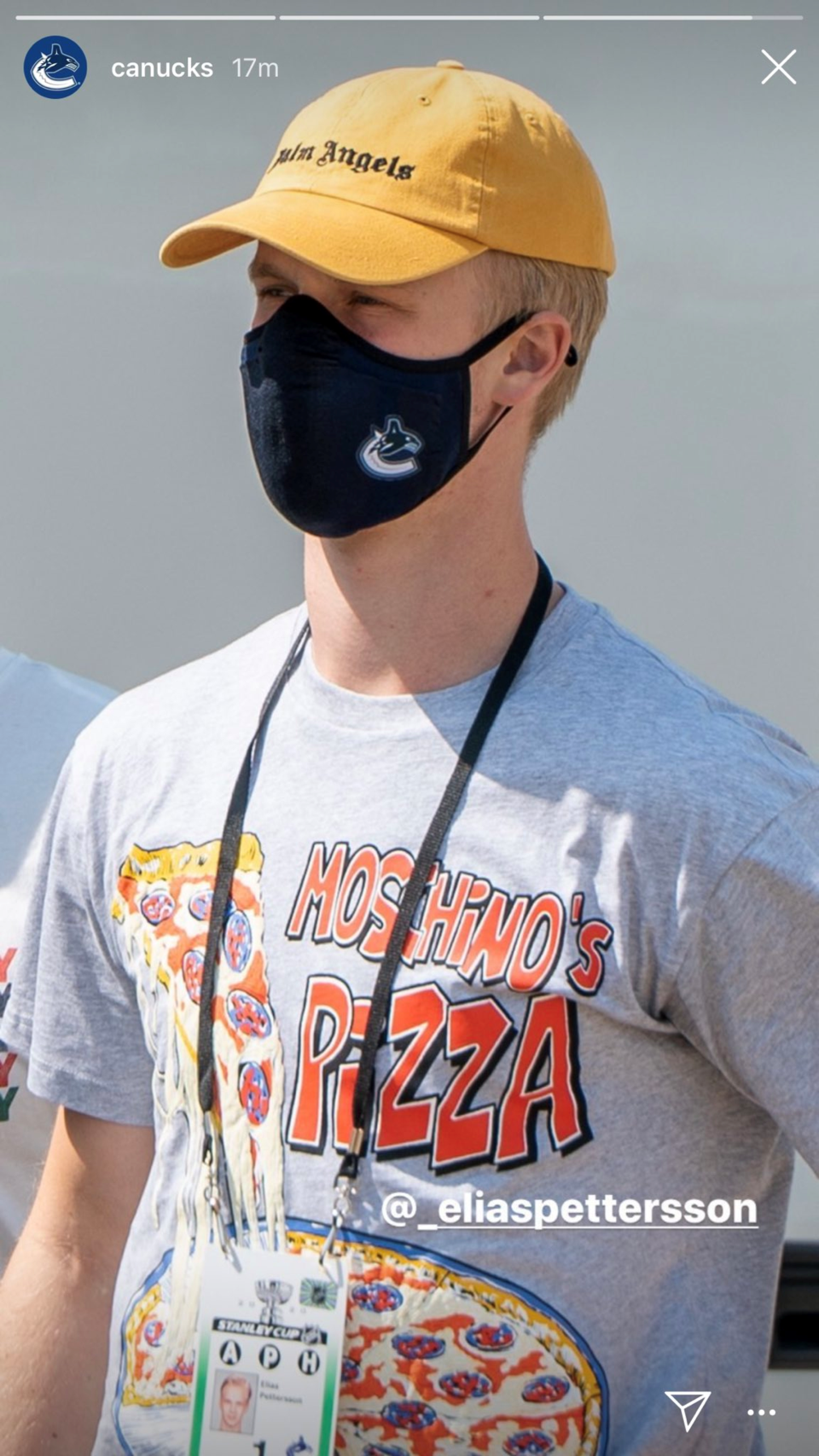 Pettersson can’t just wear a graphic t-shirt. He has to wear the most garish, yet somehow fashionable, t-shirt he can find.

“The one time he dressed like a 10 year old and we all loved it,” said Jang.

The Moschino t-shirt is so much more bold and colourful than what you’d typically see from an NHL player and it will only set you back $310 if you can find it in stock anywhere. He tops it off with another Palm Angels hat, this one a pricey $530. You know what they say about Palm Angels hats: betcha can’t have just one. 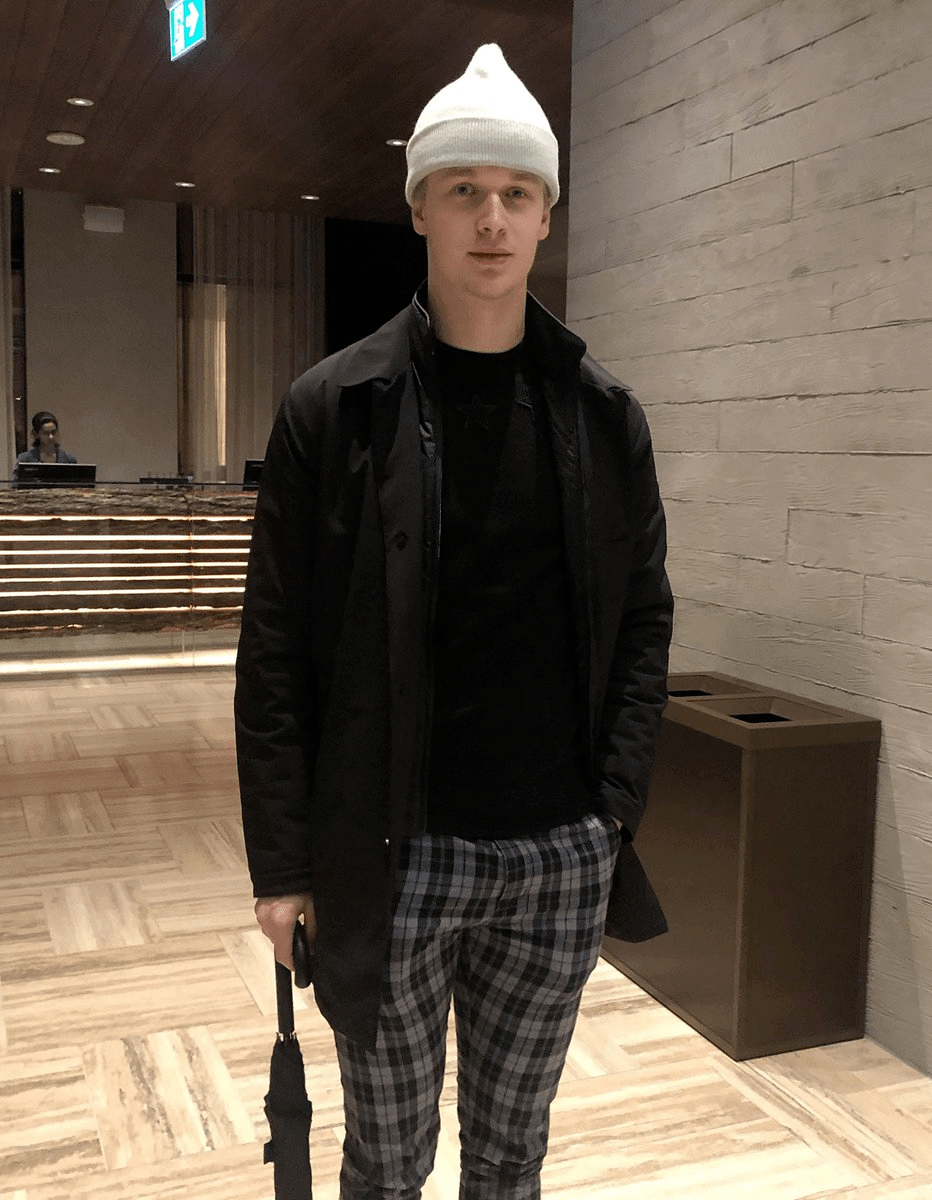 I don’t know the point of origin for any of Pettersson’s pieces here, but it’s a nice understated look, while still having the bold element of the plaid pants.

“I’m actually obsessed with it, it looks so good,” said Jang of the look, calling it “The Suave Scandinavian.”

This slightly longer jacket — Overcoat? Topcoat? Rain coat? — is a great fundamental piece that works well with a variety of outfits and a practical choice for Vancouver’s sometimes turbulent weather.

He wears it pretty frequently, such as in this shot with his brother, Emil, wearing it over a $1,100 Yves Saint Laurent hoodie with his round sunglasses that wouldn’t look out of place on John Lennon, Ozzy Osbourne, or Elton John. 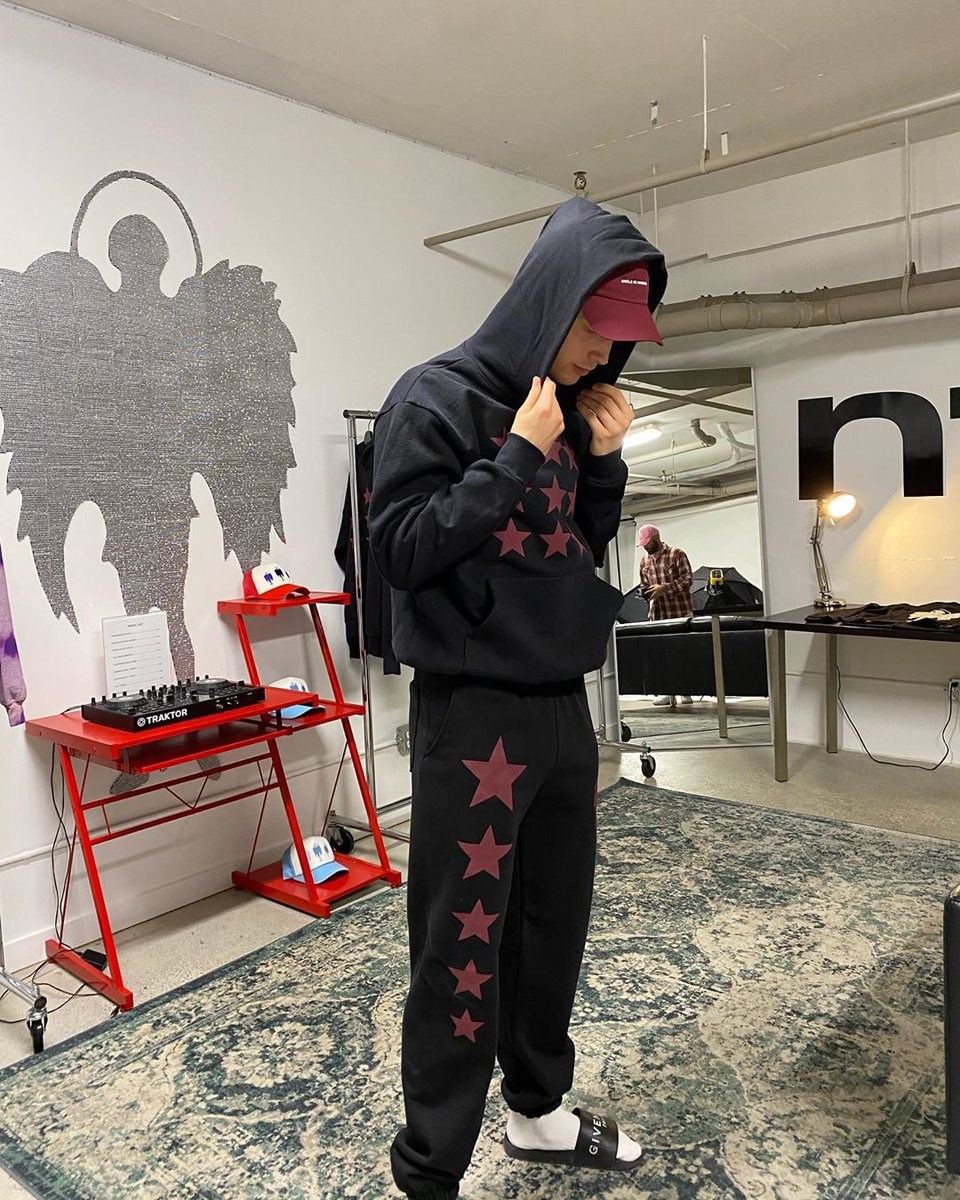 Pettersson dropped by New Tone Studios, a design collective in downtown Vancouver and got kitted out in their Hollywood hoodie and sweatpants.

“Album dropping soon,” said Jang about the look and, who knows? He was seen behind the mic in a recording studio not that long ago with his good buddies Brock Boeser, Troy Stecher, Thatcher Demko, and Zack MacEwen.

Is Pettersson about to drop a trap track about the neutral zone trap? Only time will tell.

You can cop Pettersson’s style for a combined $280 for the hoodie and sweatpants, though the Givenchy slides will set you back another $410. Whether you have enough swag to rock those slides with white socks, that’s up to you. 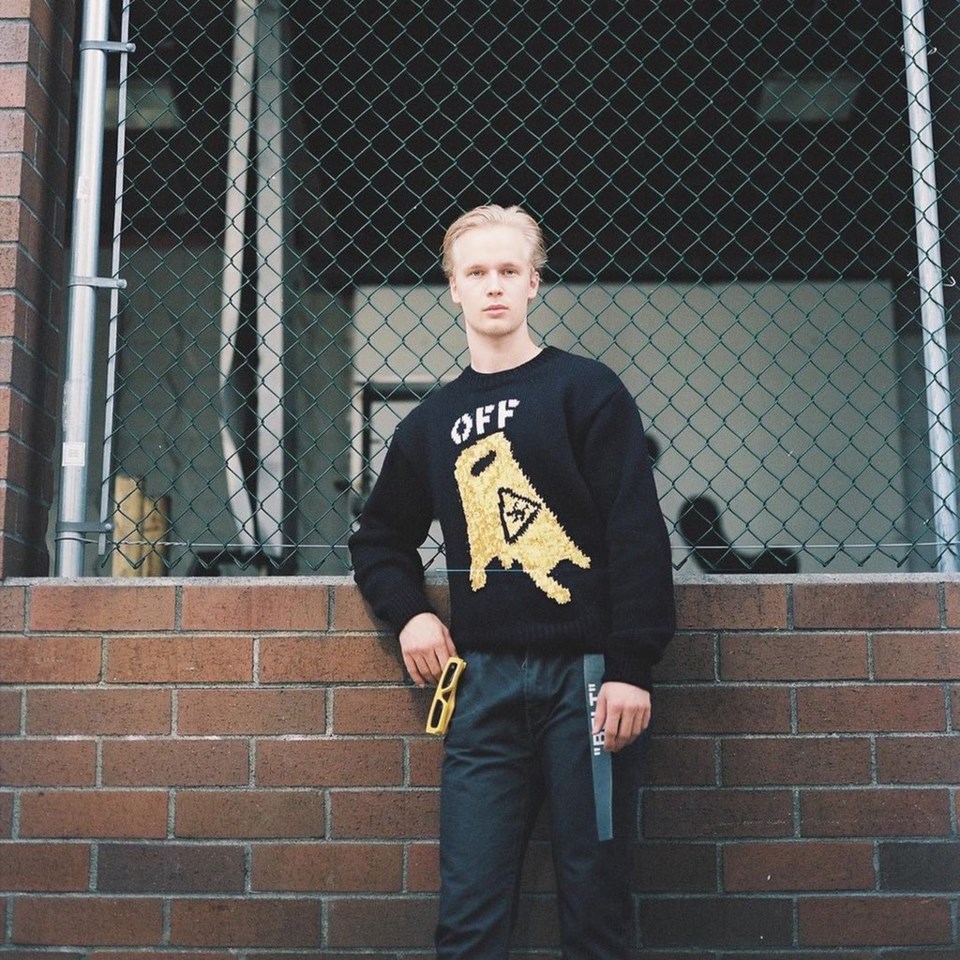 Pettersson’s Neo look for Off-White caught all the meme attention, but I’m partial to this outfit: the eye-catching bright yellow “wet floor” sign on the sweater, which also has a bold design on the back. It’s a skeleton, uh, kidnapping a girl I guess? 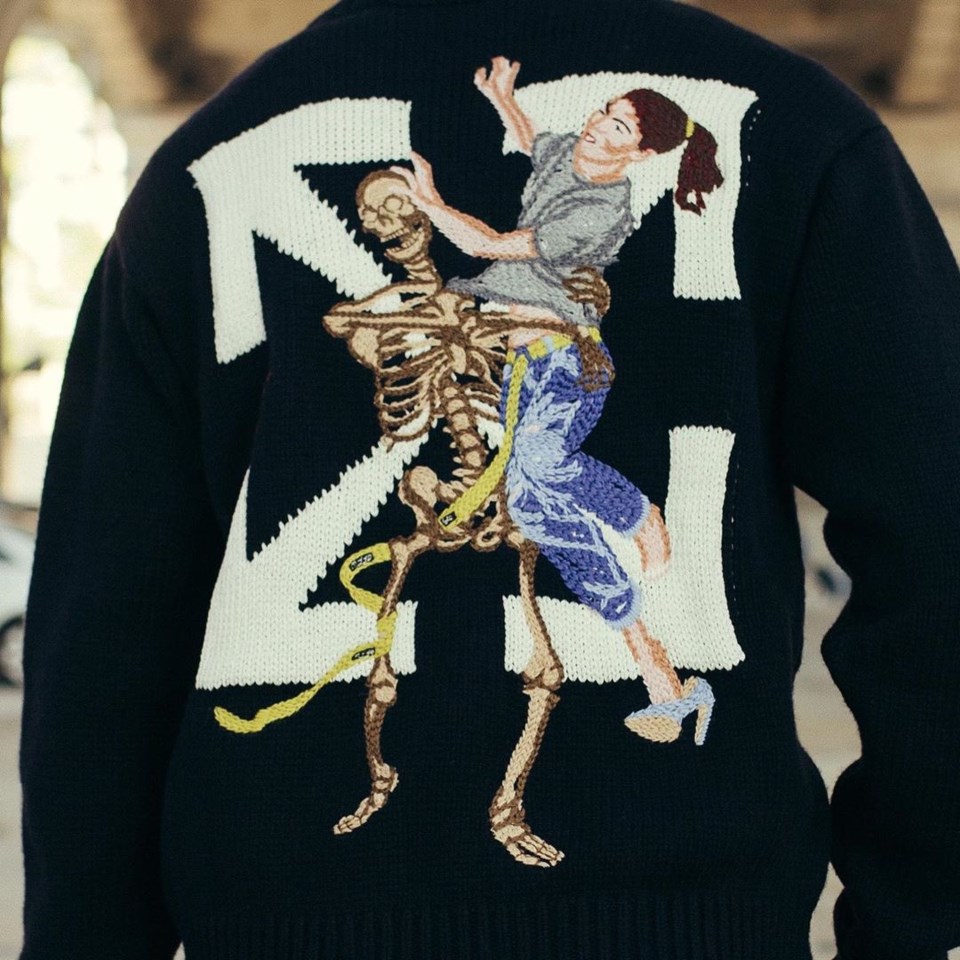 Grabbing a pair of yellow-framed sunglasses to go with the yellow on the sweater is a nice touch and those are some slick grey jeans: no distressing or rips to distract from the sweater itself.

The sweater, with its intarsia knitting for the elaborate design, will set you back $1,355. The sunglasses are $399, while the jeans, with the belt helpfully labelled “belt,” are $787. 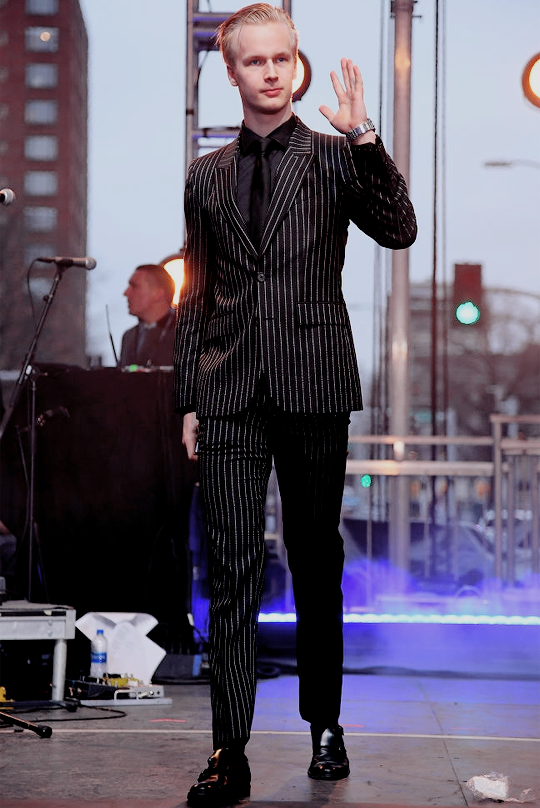 When Pettersson has to wear a suit, he still sets himself apart. He turned heads when he first showed up to a game in pinstripes, looking like a mobster from the 1920s or perhaps from something a little more recent.

Pettersson’s long limbs certainly evoke the skeletal Skellington and his pinstripe suit from The Nightmare Before Christmas. Incidentally, the only reason Jack Skellington had a pinstripe suit was so that his body would stand out more from the background. It was originally a plain black suit, but it blended too easily into the dark background of Halloween Town, so director Henry Selick gave him his iconic pinstripes.

On the red carpet for the  2020 NHL All-Star Weekend, Pettersson stepped up the pinstripes with a sleek black dress shirt and black tie. Sure, it didn’t compare to the hologram glow of his teammate Jacob Markstrom’s suit, but what possibly could?

The pinstripes are definitely more bold than some of his other attempts to switch up a game day suit with a stylish tweed flat cap straight out of Peaky Blinders.

Although there does seem to be a theme: Italian mafia pinstripes? British crime family cap? Should we be worried about Pettersson’s secret life of crime? 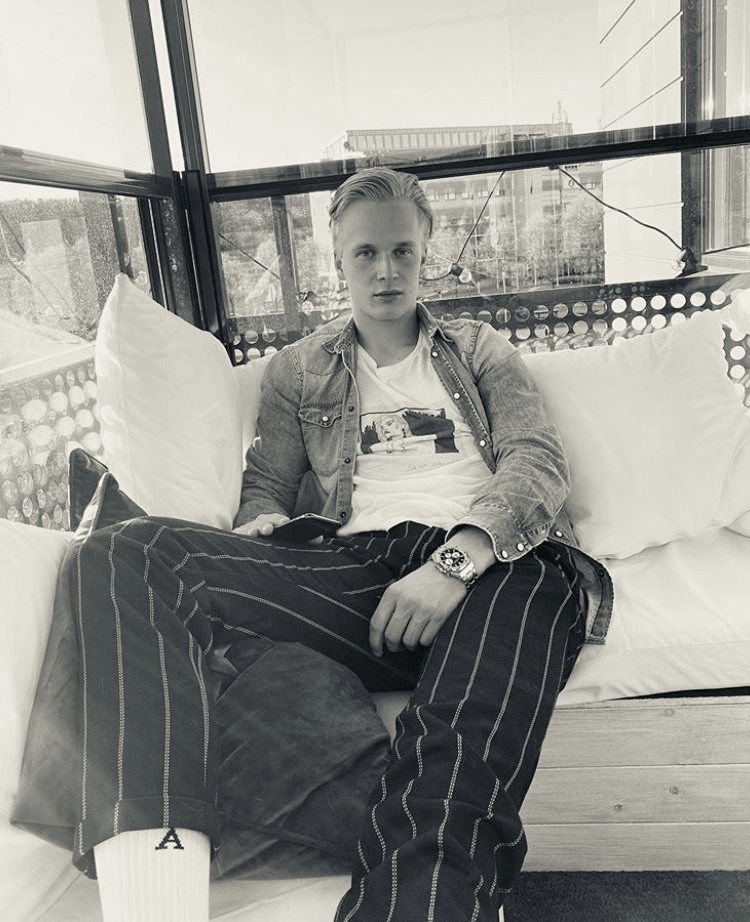 Even when just hanging out on a Vancouver balcony, Pettersson looks effortlessly stylish. With what appears to be a Rolex on his wrist, casual-fit striped pants, and open denim shirt, Pettersson looks like he’s waiting to open for a 90’s alternative band, possibly the Gin Blossoms, Goo Goo Dolls, or Better Than Ezra.

If you want to rock a Rolex like Pettersson, you’ll be dropping some serious coin. An entry-level Rolex is around $6000, while a Daytona, like it appears Pettersson is wearing, is likely to be $25,000+.

That’s out of reach for most people, but alternatives like the Seiko SSB series provide a similar look and functionality at around $180-250. 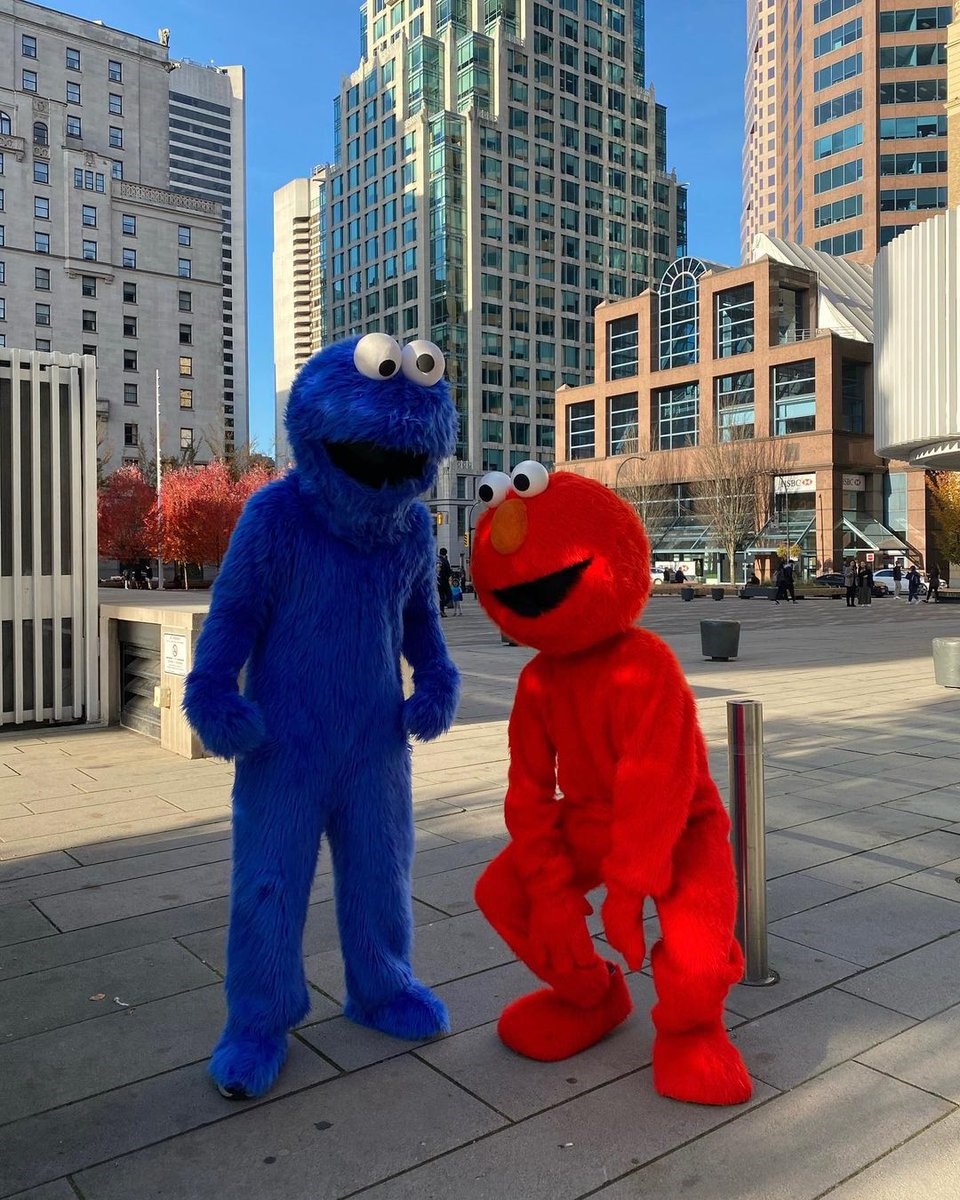 Pettersson spent Halloween as the tallest Elmo I’ve ever seen. He spent the day buying cookies with whoever was in the oversized Cookie Monster outfit and partied with the cast of The CW’s Riverdale, though it wasn’t necessarily the type of party you might be thinking of.

“He killed it on Halloween,” said Jang. “Petition for next year’s costume to be Big Bird with Brock [Boeser] and Quinn [Hughes] as Bert and Ernie.”

While Quinn might take convincing, Boeser would likely go for it. He’s shown a willingness to get super into Halloween before, such as his very committed ringmaster-at-a-haunted-circus look from this year.

Pettersson showed that he can still bust a move while dressed like a giant muppet, though he almost lost his head over the edge of a highrise balcony, which would have been very alarming to any passers-by on the street below.

A quality Elmo costume will cost anywhere from $100 to $350, though none of the ones I was able to find online looked quite as sleek as Pettersson’s. Perhaps this costume was a custom job.

Elias Pettersson may not fully replicate Pavel Datsyuk, but he comes close, according to @HeyBarber. https://t.co/dRIKbdf95B