Is there a reasonable path back to playoff contention for the Canucks?

So, you're telling me there's a chance.

It’s easy to write off the Vancouver Canucks this season. Their dreadful start has exposed some serious flaws in the team’s construction and raised the ire of Canucks fans, many of whom are calling for significant changes in management and coaching.

The Canucks have just eight wins in 24 games and sit 28th in the NHL in points percentage with their 8-14-2 record. They’re on pace for 62 points, which would be their worst total since the soul-crushing 1998-99 season.

Still, the season is young. The Canucks’ first 24 games have gone remarkably poorly and the team needs to make changes but is the entire season necessarily a write-off? Can the Canucks still make the playoffs despite their start?

Call it residual positivity after the Canucks won two straight games for just the second time this season, even if those wins came against the 30th and 32nd-ranked teams in the NHL, but a playoff push isn’t out of the realm of possibility. It’s improbable, yes, but not impossible.

The Canucks face long odds to make the playoffs

Some analytics sites calculate the chances a team makes the playoffs and there’s a pretty wide range of predictions for the Canucks, primarily because each site uses a different methodology.

HockeyViz is significantly less bullish on the Canucks’ chances, giving them just an 8.4% chance of making the playoffs. 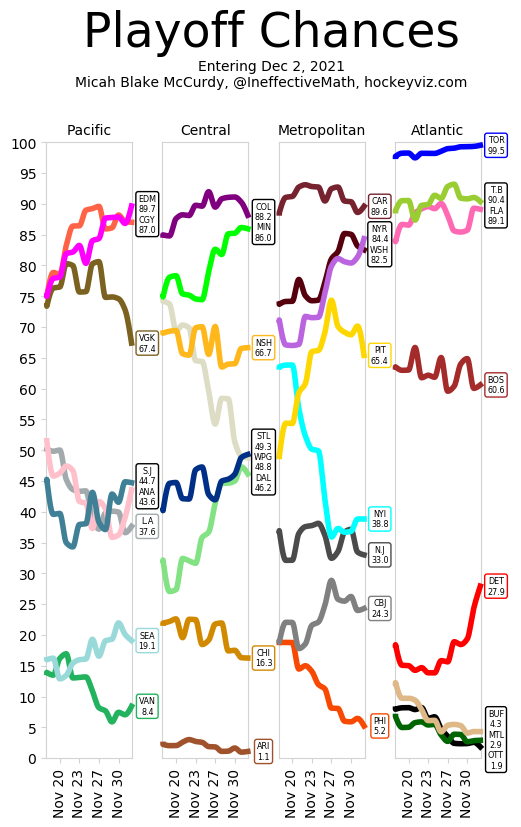 So yes, the odds are extremely long. Right now, a bet of $100 on the Canucks making the playoffs would pay out a whopping $1200 if they somehow managed to do it.

It also cannot be emphasized enough that the Canucks’ recent two-game winning “streak” came against two of the worst teams in the NHL. The Canucks have a long way to go before they’re convincing anyone that they can turn this season around.

Still, the Canucks have a chance. A 1.8% chance is not 0%. So, what would it realistically take from the Canucks to get back into playoff contention?

How many games do the Canucks need to win?

I’m not talking about any changes the Canucks might need to make, whether that’s a change in leadership to provide a different direction, trades to fix issues in roster construction, or new coaches to implement different systems. But where do the Canucks need to get to and is it possible for them to do it?

Reaching 93 points is a tall order for the Canucks, who have put themselves behind the eight ball to start the season, on-pace for 62 points. In order to reach 93 points, the Canucks will need 75 points in their remaining 58 games.

There are so many ways to get an opportunity to lose in the first round!

But let’s assume it will take the average of 93 points to make the playoffs. Can the Canucks put together that kind of record over their final 58 games?

One way might be to start turning their plethora of one-goal losses into one-goal wins.

Of the Canucks 16 losses this season, 11 have come by one goal or by two goals with an empty netter.

In those games, just one more goal from the power play, one more stop by the penalty kill, or one more save by Thatcher Demko or Jaroslav Halak gets the game to overtime or wins the game in the case of the overtime and shootout losses. The Canucks’ power play has goals in three straight games and the penalty kill has been better over the last six games — still below league average, but we’re only looking for a small improvement to win a couple more one-goal games over the rest of the season.

Theoretically, if the Canucks don’t make large-scale improvements but win more one-goal games, would that be enough to make the playoffs?

Let’s say the results of one-goal games are essentially coin flips — it’s not the case, but it will do for our hypothetical. The Canucks have also won five one-goal games, so if the team won half of their 16 one-goal games this season, they would have eight wins in those situations — three more than they have currently.

That would bring their record now to 11-13-0. But now we’re missing overtime or shootout losses. Approximately 25% of NHL games go to overtime, so if we assume that six of the Canucks’ games would go to overtime and three of those would be losses — sticking with our coin flip — then the Canucks would be 11-10-3.

That’s not good enough. The Canucks need to be considerably better than .500 over the rest of the season to get to the playoffs.

Getting Charlie Kelly with the numbers

Let’s look at this another way. It's time to lose our minds.

And again, we’ll assume 25% of their 58 remaining games go to overtime and the shootout and half of those are losses where the Canucks get one point: that’s 7 overtime losses.

That’s 67 points for a total of 85 on the season. Still not enough.

That will be difficult as they have a very tough schedule ahead of them for the rest of the season.

The strength of the Canucks' remaining schedule is, well, strong

More Hockey Stats uses a system borrowed from chess — the Buchholz system — to estimate strength of schedule. According to that metric, the Canucks have the hardest remaining schedule in the NHL.

That’s right: the Canucks’ lousy start has come in what is arguably the “easy” portion of their schedule.

The Canucks have yet to play top teams like the Washington Capitals, Toronto Maple Leafs, Florida Panthers, and Carolina Hurricanes. They still have two more games against the Edmonton Oilers and four more against the Calgary Flames, the top two teams in their division, not to mention three more games against the Vegas Golden Knights, who were expected to be the top team in the Pacific.

Things aren't going to get any easier for the Canucks.

Can the Canucks reel in the teams ahead of them?

Then there’s the big issue: the number of teams ahead of the Canucks in the standings. It’s not just that the Canucks need to win more games, it’s that they’ll need to pass six other teams who are also looking to make improvements and get to the playoffs.

Two of those teams currently out of the playoffs are the Vegas Golden Knights and Colorado Avalanche, both of whom are safe bets to get their acts together and move into playoff position.

That’s five teams — the Canucks would still need to catch one more to make the playoffs, likely one of the Winnipeg Jets or Nashville Predators. Doable? Maybe. But all it takes is a couple of these teams to get hot and the Canucks could get stymied.

All of this is just hypothetical, of course, but it's just an illustration of how much has to go right for the Canucks to make the playoffs. Not only do they need to make significant improvements themselves and get some luck in whatever one-goal games that remain, they’ll need six other teams to falter so that they can pass them in the standings.

It’s not impossible, but it’s definitely not reasonable.