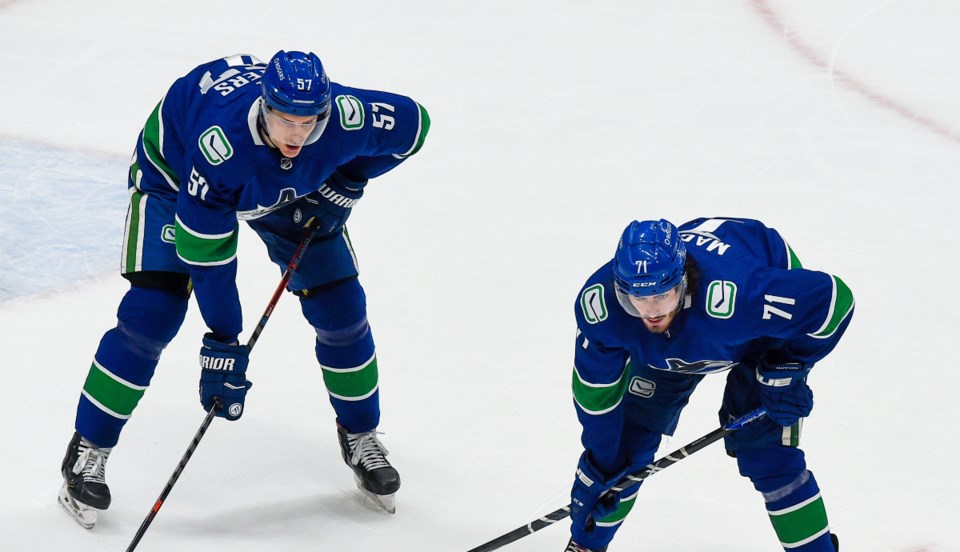 Tyler Myers and Zack MacEwen line up for a faceoff with the Vancouver Canucks. Bob Kronbauer / Vancouver Is Awesome

The Vancouver Canucks have played seven games since coming back from their COVID-19 outbreak. As of Thursday night’s loss to the Toronto Maple Leafs, they’ve officially lost most of them.

The team’s return to action started off so well. They rattled off back-to-back wins against the division-leading Toronto Maple Leafs, with Braden Holtby playing his best hockey of the season. Combined with a dreadful slide by the Montreal Canadiens, the Canucks actually had Vancouvuer seriously considering the possibility of the playoffs for the first time in months.

Then things went sideways. They lost three of four against the basement-dwelling Ottawa Senators, then followed that up with a lacklustre rematch with the Leafs.

It’s not just the results, either. Since their return to the ice, the Canucks have been out-shot, out-chanced, and out-played. Over their last seven games, their score-adjusted corsi — a measure of shot attempts for and against at 5-on-5 — is 42.02%*, better than only the Detroit Red Wings. By a more advanced metric, expected goals, they’ve been even worse: 35.19%, worst in the NHL.

The post-COVID Canucks should get a pass

It's true, the Canucks haven’t been playing well. But it’s also hard to blame them.

How can you judge a team’s struggles after dealing with the worst COVID-19 outbreak in professional sports? 22 players tested positive for COVID-19, with some experiencing some pretty significant symptoms. It shouldn’t be surprising that they’re fatigued after dealing with a serious respiratory illness, particularly one where the long-term effects are still unknown.

In a fast-paced game like hockey, being even a half-step slower can be detrimental, and the mental mistakes that come with fatigue can easily cost a team the game.

So, to a certain extent, the post-COVID Canucks get a pass.

The pre-COVID Canucks, on the other hand, have no refuge. They can be judged accordingly.

One of the worst teams in the NHL

Prior to their outbreak, the Canucks were still one of the worst teams in the NHL. They had a 16-18-3 record, giving them a points percentage of 0.473  — 26th in the league — and their underlying statistics were equally bad.

At 5-on-5, the Canucks’ scored-adjusted corsi was 46.64%, better than just four other teams: the Red Wings, Columbus Blue Jackets, Arizona Coyotes, and Chicago Blackhawks.

If you’d prefer to look at shot quality instead of shot quantity, the Canucks fare no better. Their score-adjusted scoring chance differential at 5-on-5 was the worst in the NHL: 44.34%. Their biggest issue is that they gave up the highest rate of scoring chances against in the NHL and were mediocre at creating their own.

These statistics matter not just because they paint a picture of how well the Canucks had performed up until that point in the season, but also because they’re the best predictor available for how they were likely to perform for the rest of the season. Corsi, in particular, is still the most predictive team metric available.

So, the Canucks’ corsi of 44.64% prior to their outbreak would predict that the team’s goal differential at 5-on-5 would be similar for the remainder of the season.

The Canucks’ goal differential at 5-on-5 over their last seven games has been 44.44%.

It’s good to have empathy for the players as they face a brutal schedule and a, frankly, unfair challenge of playing while clearly not 100% healthy. The players don’t deserve to be judged too harshly as they play out the rest of the season.

What this does mean, however, is that the team’s COVID-19 outbreak can’t be used as an excuse for the team’s overall performance this season. The Canucks not only didn’t meet expectations this season, they were also one of the worst teams in the NHL.

The question now is how will the team get better for next season?

*All statistics via Natural Stat Trick

If all goes well for the Canucks, Braden Holtby will play himself right out of Vancouver
Apr 26, 2021 3:32 PM
Comments