In a mostly bad season, Nils Höglander has been unequivocally good

A look under the hood at Höglander's advanced analytics suggests he's been even better than you might think.

Not a lot has gone right for the Vancouver Canucks this season.

January and February put the team so completely behind the eight ball that there was essentially no chance of recovering. Elias Pettersson’s season started off slowly, then he suffered a seemingly season-ending injury. The defence has been shaky at best, forward depth has been a mess, and then there’s the goaltending: Thatcher Demko took too long to settle in, while Braden Holtby seems to have only just found his form.

Fortunately, there have been some bright spots along the way, from Brock Boeser's bounceback season to Demko establishing himself as a true number one goaltender. And one of the brightest has been the play of their young rookie winger, Nils Höglander.

That’s not news to Canucks fans, who have enjoyed both his high-end skill and work ethic all season. What stands out now, after 42 games, is just how good his underlying statistics have been.

Höglander’s counting numbers are solid enough on their own: 9 goals and 19 points, which already matches the reasonable expectations I projected for Höglander over 56 games. That’s on pace for 18 goals and 37 points over a full 82-game season, which represents solid second-line production.

That’s great for a 20-year-old rookie but when you dive into more advanced analytics, Höglander’s season looks even better.

Of course he's got a good corsi

For instance, Höglander is the only Canuck that has played more than three games this season with a positive corsi differential. As a reminder, corsi is simply shot attempts for and against at 5-on-5 and is used as a proxy for useful puck possession.

That means, when Höglander is on the ice, the puck consistently moves in the right direction — out of the defensive zone and into the offensive zone. This holds up when we look at other metrics as well. Höglander is above 50% in scoring chances, high-danger chances, and expected goals.

What can sometimes happen with rookies, however, is that they are heavily sheltered. Coaches will often avoid matching up a rookie against the best lines on opposing teams or avoid sending them out for defensive zone faceoffs.

That’s not the case for Höglander, who has skated primarily on Bo Horvat’s wing all season on a line that is regularly used as a match-up line against the best players in the North Division. The forward he’s faced the most on the Edmonton Oilers? Connor McDavid. The forwards he lined up against the most on the Toronto Maple Leafs? John Tavares, Auston Matthews, and Mitch Marner.

While head coach Travis Green has frequently talked about details in Höglander’s game this season that need to be improved, it’s clear that he already trusts Höglander enough to use him against some of the best players in the NHL.

“I think at the beginning of the year, I wasn’t sure what to expect out of the defensive side of [Höglander’s] game,” said Green earlier in the season. “It’s no secret that I like to use Bo in a role where he’s playing against top lines, he’s that type of centreman. It worried me a little bit before the year started, but we wanted to try it and he’s shown that he can play on the other end of the puck.”

The further you dig into Höglander’s underlying statistics, the better he looks. 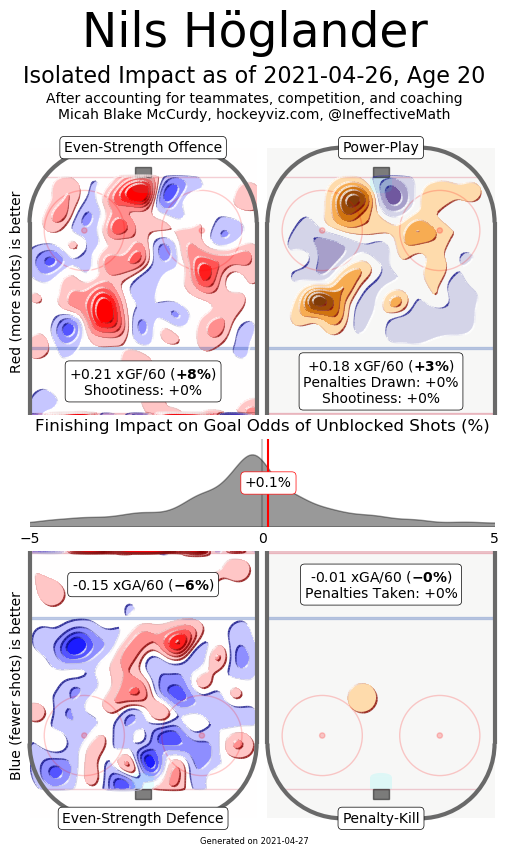 To boil these visuals down to numbers, Höglander helps the Canucks create shots that are 8% more dangerous than league average, while making the opponents’ shots 6% less dangerous than average.

That is elite impact. For context, there is only one other Canuck that comes even close to that type of impact at both ends of the ice: Elias Pettersson. 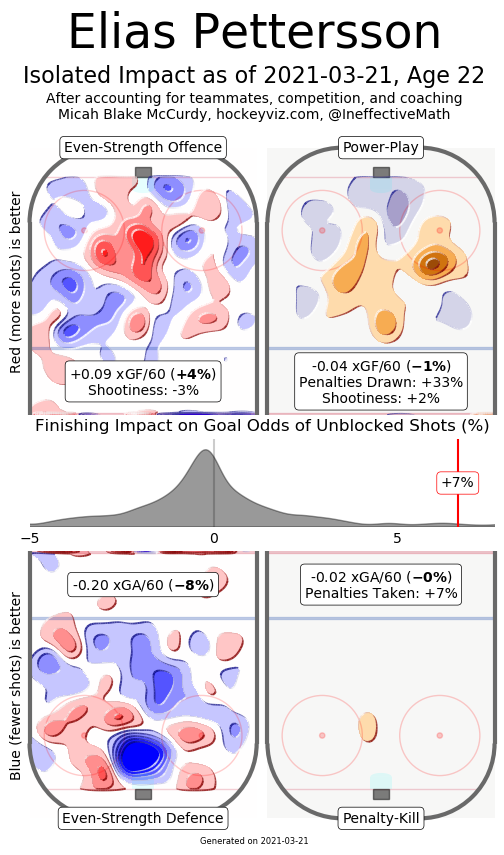 The big differentiator between Höglander and Pettersson is, of course, finishing. Pettersson is an elite shooter and playmaker that can make that final shot or final setup for a goal. Höglander isn’t at that level: his impact on finishing is right around league average.

If there’s such a thing as damning with faint praise, then saying Höglander isn’t quite as good as Pettersson is blessing with faint criticism. The fact that Höglander has an impact on puck possession, chance generation, and defence that even approaches Pettersson speaks very well indeed of the rookie winger.