Make some noise! — How the Canucks’ fake crowd guy pumps up an empty arena

Steven van Vooght is the man behind the crowd noise at Canucks games.

It’s the Vancouver Canucks’ home opener and Rogers Arena is buzzing. Midway through the first period, the Canucks are on the power play and they’re looking dangerous. Suddenly, J.T. Miller sends a one-touch pass to Bo Horvat, he slings the one-timer past Carey Price, and the building erupts in cheers as the goal horn sounds.

There’s just one thing: the maroon seats at Rogers Arena are empty. The only people in the building that don’t work for the Canucks, Montreal Canadiens, or the NHL are the members of the media reporting on the game, and they’re not supposed to cheer.

So, where’s all the cheering coming from?

“It’s an odd job, it’s literally a COVID job,” said van Vooght, “but I’m happy to be back working in the arena.”

From hyping up the crowd to being the crowd

Van Vooght has spent a couple of years pumping up the crowd at Rogers Arena as part of the game presentation department. Previously, that “pumping up” was indirect via the hype team in the stands. Now it’s a lot more literal with a series of buttons and volume sliders.

Instead, he sits in a suite at centre ice with equipment that wouldn’t look out of place in a DJ booth, cueing up crowd noise in response to what happens on the ice. His experience as a hobbyist DJ at least gave him some familiarity with the equipment and that, combined with his previous experience hyping up the Rogers Arena crowd made him the right man for the job.

“I'm on these two hot cue controllers and a laptop setup,” said van Vooght. “Essentially all the different hot cues are different sounds. You can create anticipation by adding more layers. There are groans for if we get scored on or cheers if we score a goal or there's a big hit for us. And then there's the big ‘Oohs’ or ‘Aahs’ when there's a close chance or a scramble in the crease.” 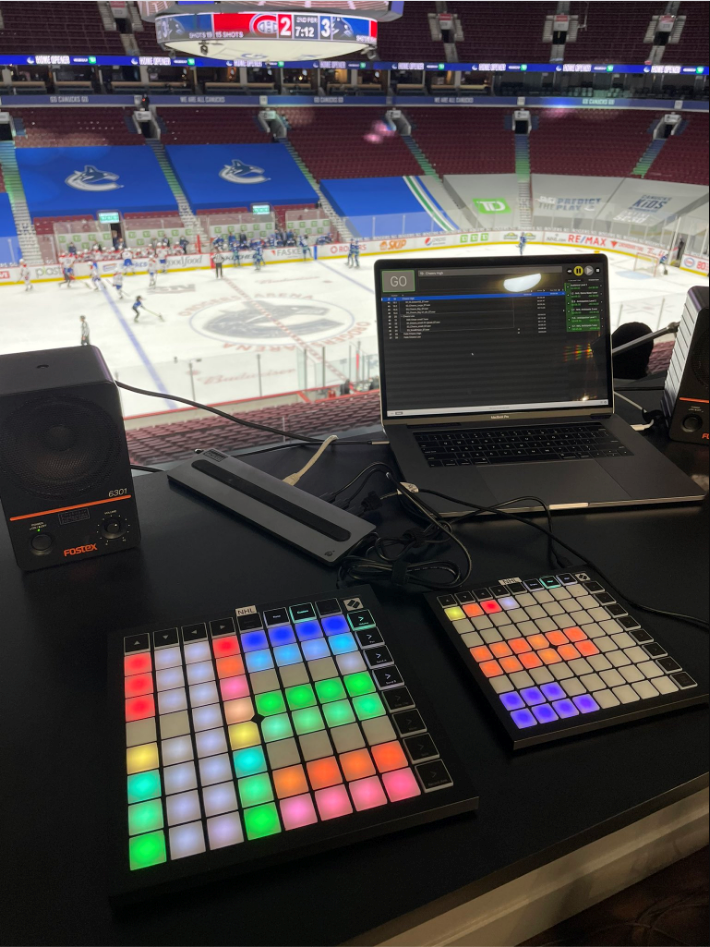 The equipment needed to make a synthetic crowd roar at an NHL game. By Steven van Vooght

“There's a lot of different options, It's just knowing when to use them and making sure you're not repeating the same sounds,” said van Vooght. “You are limited to your controller, but it is kind of an art — there's three or four different ways to make certain situations.”

The aim is to make the simulated crowd sound as close to the real thing as possible to provide some sense of normalcy to the empty arena.

"I got trained literally two days before the home opener."

It was a bit of a whirlwind for van Vooght to get ready for the start of the season. He had a much shorter training camp than the players.

“I got trained literally two days before the home opener,” said van Vooght. “Jeff Kozak, he was one of the operators in Edmonton, he trained me and he was going around to all seven Canadian teams training their operators. In Edmonton, he would do the three games in a row, which I don't know how he did, because my brain would turn to mush.”

From Kozak’s training, van Vooght loaded up Canucks games that he could find on YouTube and started to practice being the crowd.

“I did Burrows slaying the dragon, which was awesome,” he said. “I picked all the best Canucks games obviously in the 2011 Cup run. And then we did some other ones too, like Canucks-Flames, the home opener when Loui scored on his own net. So that was kind of interesting.”

What sound did he cue up for that particular moment?

One of the biggest lessons van Vooght gleaned from Kozak’s training is the idea that less is more. As much as it’s tempting to hit a button to have the crowd react to every moment on the ice, it doesn’t actually reflect the sound of a real crowd.

“One of the things Jeff keyed in on is you don't have to sweeten everything,” he said “A crowd isn’t always going to cheer for every save or the smallest of hits. That was my problem when I was first training, I was, like, okay I gotta do everything, there's gonna be a reaction to everything, but that's not really realistic.”

Of course, a lot of that went out the window in the Canucks home opener, which was certainly a trial by fire.

“Then you go into the home opener and we win 6-5 in a shootout, and there is literally everything going on in the game,” he said, laughing.

"It was very strange."

While the goal is to make everything sound as natural as possible, there’s no denying that it’s still very odd. According to van Vooght, he tries not to coordinate with other parts of the Canucks’ game presentation in order to provide a more realistic crowd reaction throughout the game and that led to one of the few times veteran in-game announcer Al Murdoch has been thrown for a loop.

“In that game when we scored our first goal, Al was doing his announcement,” he said. “I did a cheer after he announced it and he got thrown off, and he was like, ‘It was very strange to hear a reaction when I wasn't seeing any people and I wasn't expecting it.’”

Despite the odd situation, van Vooght and the game presentation crew are intent on still having fun with it, such as the upper bowl vs lower bowl cheering competition they held during one stoppage in play during the home opener.

"That was just something we do for fun," said van Vooght. "We're gonna try and think of different little things like that to do throughout the year, just to try and add some humour and make the best out of a strange situation."

Not every game can be fun, however. There’s also the challenge of managing the synthetic crowd noise during a loss, particularly an ugly one like the Canucks’ 7-3 loss in their second home game of the season.

“I was definitely a little quieter from the middle of the second on, which I think a real crowd would be anyways,” said van Vooght. “You want to be subtle with your cheering, even when positive things happen for the Canucks because you don't want it to come off as sarcastic. In that situation, less is more.”

"It gets you going a little bit."

While van Vooght has plenty of crowd noise elements that are just a push of a button away, there are still some things missing from his arsenal. The plan is to add more Canucks-specific elements in the near future, like the “Woo!” response to goal calls and “Go Canucks Go” chants that can be layered on top of the other crowd noise.

The chants are an intriguing element. Unlike in the NFL, which adds crowd noise just to the television broadcasts, the players on the ice can actually hear the simulated crowd in the building.

“They have the crowd noise in the background, which gets you going a little bit,” said Jalen Chatfield, who made his Canucks debut in the home opener on Wednesday night.

That made van Vooght’s night.

“That was really cool,” he said. “Right after the game, I was scrolling through Twitter and trying to find any sorts of feedback that I could, positive or negative, just to see what people are thinking. Canucks Twitter is very vocal, as I'm sure you're aware. It was really cool to see what Chatfield said because, at the end of the day, it's cool to try and at least pump the players up and make it feel more normal for them.

“If it helps the team win and helps them perform better, then I'm all for it. That's what I'm here for.”