The Canucks might have to outscore their defensive issues all season

So far this season, the Canucks have allowed the most shots on goal in the NHL.

On Wednesday night against the Montreal Canadiens, the Vancouver Canucks’ offence erupted, scoring five goals on one of the best goaltenders in the NHL, Carey Price. It was a welcome change for Canucks fans, particularly on the power play, which had three goals after going 0-for-15 heading into the game.

The offensive explosion, however, was undercut by their defensive game: they may have scored five goals, but they also gave up five goals thanks to some troubling defensive breakdowns. Tyler Toffoli was left all alone for all three of his goals, but the defence looked no better on the Canadiens’ two other goals.

The Canucks were able to outscore their defensive woes on Wednesday night, winning in the shootout, but those defensive woes were not confined to just one game. Through the first five games, the Canucks have given up more shots on goal than any other team in the NHL: 180, compared to the Edmonton Oilers at second-most with 171.

“In some of the games we're definitely getting out-blocked, so maybe that's something,” said Tanner Pearson, suggesting the Canucks need to do a better job at getting in shooting lanes, before admitting, “Maybe teams are just funnelling more pucks to the net.”

Heavy turnover on defence — personnel-wise, not puck-wise — could be contributing to some shaky defensive systems. Losing Chris Tanev and Troy Stecher, both long-time Canucks defencemen with plenty of familiarity with the team’s systems, can’t have helped. They added two new veteran defencemen in Nate Schmidt and Travis Hamonic, as well as rookies Olli Juolevi and Jalen Chatfield.

“I just think it's early in the year, there's some new guys, there's still things we have to clean up for sure,” said Bo Horvat. “Obviously, we're not happy with some of our play. Tightening up defensively is one of our priorities and limiting their chances. I think we have to keep working on it.”

Hamonic, in particular, has looked quite rusty, understandably so. He opted out of the 2020 Stanley Cup Playoffs for family reasons last year, so hadn’t played an NHL game since February 8th (against the Canucks, natch) before suiting up in the Canucks’ season opener. On top of that, he missed most of training camp while in quarantine.

It’s not just the defencemen that have struggled, however; it’s team defence.

Take this Mikael Backlund goal from Monday’s game against the Calgary Flames.

There are several issues here. For the defencemen, Hamonic goes chasing the puck and takes himself completely out of the play, while Quinn Hughes fails to get body position on Milan Lucic to prevent him from getting to the puck.

The forwards are even more of a problem, however. It starts with the attempted zone entry from Jake Virtanen and Adam Gaudette, which gets interrupted by Josh Leivo in the neutral zone and turned the other way. That’s an issue that Pearson identified as a clear problem for the team.

“You make the wrong play at the blue line to get pucks in their end and they just turn around and shove it down your throat,” said Pearson.

That’s what happens on the Backlund goal, but it’s exacerbated by the backchecking forwards, who skate back hard, but lose all sense of structure in the process.

Antoine Roussel takes the puck carrier in the middle of the ice, which is good, but then gets spinning around in front of the net looking for the puck instead of tying up a Flames stick.

Gaudette skates back and takes Leivo’s stick, which is good, but then follows Leivo and gets stuck at the side of the net, instead of stopping up to read and react to the situation. He and Hamonic end up standing side by side as the puck is shot in the net, covering no one.

And Virtanen watches the puck the entire time, oblivious to the danger of the Flames’ skaters behind him.

It’s a total breakdown from every Canucks skater.

It’s more than just that one play, of course. It’s about the overall play of the entire team over the course of the full 60 minutes of every game. You don’t give up 36 shots per game from one line making a mistake or a few defensive breakdowns.

There’s also the problem is the penalty kill, which has struggled to start the season, but it hasn’t been just the penalty kill — the Canucks have also allowed the highest rate of shots against in the NHL at even-strength.

If we look at the Canucks’ heatmap of shots given up on the defensive end, courtesy of HockeyViz, it’s a sea of red, which indicates shots given up above the league average from those locations. 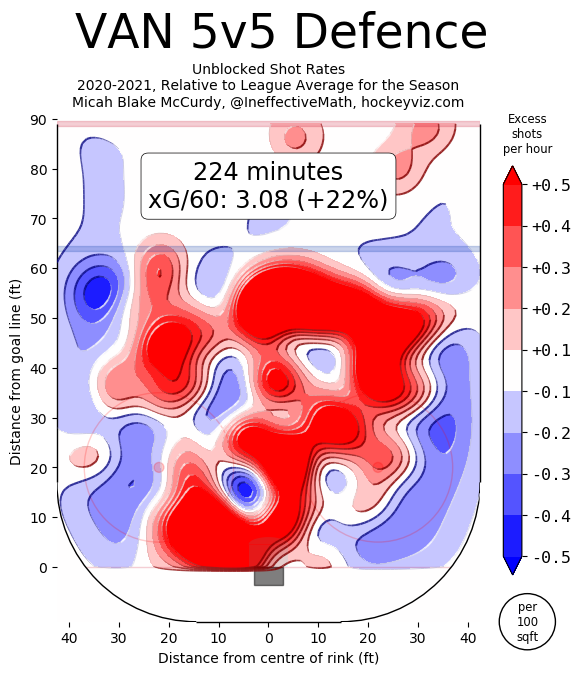 Canucks defensive heatmap at 5-on-5 via HockeyViz.com

The Canucks allow shots from almost every area of the defensive zone, but particularly in the slot and around the crease. That’s not a recipe for success, but it is a recipe for low save percentages.

Perhaps Jacob Markstrom, who stole games for the Canucks last season, would have performed better over the last five games, but even he would have struggled against the sheer volume of scoring chances the Canucks have given up. In other words, this isn’t on the goaltenders.

Can the Canucks turn this around?

All of this does come with a caveat: it’s still just five games into the season. The Canucks have time to make adjustments, shore up their defensive miscues, and perhaps ease the burden defensively by keeping the puck in the offensive zone a little bit more.

“Maybe a bit more O-Zone time from us will eliminate that and solve that issue,” said Pearson. “Just getting it in for starters, and not turning the puck over between the top of the circles. We've always been a good down-low team in getting pucks back, so I think creating more shots and, off those rebounds, getting the puck back and start working teams, tire them out, spend more time in their end and that should help us out.”

The truth is, the Canucks might need to out-score their defensive troubles, which puts a lot of pressure on their top-six forwards and power play. If the Canucks can’t limit shots against, they’ll need to put the puck in the net with a lot more consistency than they’ve shown thus far.

The real trouble might be injuries on the backend. Hamonic and Alex Edler both left Wednesday’s game with undisclosed injuries. If they’re out for any length of time, the Canucks could have two rookie defencemen in the lineup that are forced to play significant minutes, particularly since Edler and Hamonic are two of the team’s go-to penalty killers.

Chatfield performed well in his NHL debut and has the ability to play a simple and effective defensive game, while Juolevi has largely been sheltered so far this season, but has excellent underlying possession numbers in those sheltered minutes. Perhaps they can handle the responsibility, but there’s also the possibility that the Canucks’ defensive woes get worse before they get better.