Jacob Markstrom is a goalie; he gets to do the only goalie event.

Elias Pettersson won’t get his chance at redemption in the Puck Control Relay, but he will get to compare his shot to the hardest-shooting defencemen in the NHL. Meanwhile, Quinn Hughes will test his mettle against the fastest forwards in the league.

The NHL announced the participants in each event for the 2020 NHL All-Star Skills Competition on Thursday and the three Canucks at All-Star Weekend got their assignments.

It shouldn’t come as a surprise that the elite-skating Hughes will enter the fastest skater competition. Though his skating skills lend themselves more to agile maneuverability rather than straight-ahead speed, his ability to gain speed coming from behind the net could make him a dark horse candidate to challenge the supremacy of Connor McDavid, who has won the event three years in a row.

Ultimately, Hughes will have to take a page from Sonic the Hedgehog: gotta go fast. 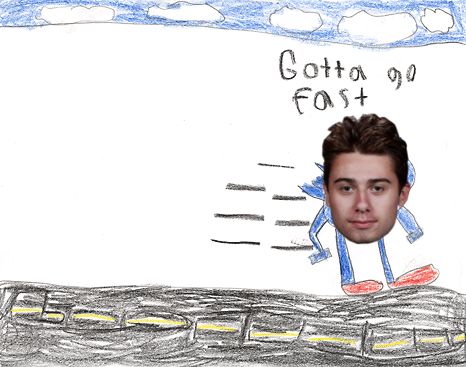 Hughes will be the only defenceman in the event. Along with McDavid, Hughes will take on Jack Eichel, Nathan MacKinnon, Mathew Barzal, Chris Kreider, Anthony Duclair, and Travis Konecny.

The NHL has discontinued several other events that Hughes could have excelled in, like the Puck Control Relay or the Passing Challenge. The league cut these events, which dragged at times when players struggled to complete one of the obstacles, in favour of a 3-on-3 USA vs Canada women’s game and a new event called Shooting Stars, which will feature players aiming for targets from a platform in the lower bowl above the ice.

That means Pettersson won’t get a chance to try the Puck Control Relay again, but he will take on the Hardest Shot competition as the only forward.

Pettersson has such a diverse skillset that he could have competed in the Fastest Skater, Accuracy Shooting, or Shooting Stars competition, but there’s no denying that he has a rocket of a slap shot, one that belies his slight frame.

In fact, Pettersson won the Hardest Shot competition at the 2019 Canucks SuperSkills event, hitting a top speed of 99.4 mph. That would have been enough to finish third, tied with Seth Jones, at last year’s All-Star Game.

With another year’s worth of muscle added to his frame, It’s conceivable that Pettersson could top 100 mph and provide a challenge for the defenceman lined up against him.

The other defencemen lined up for the Hardest Shot event are Mark Giordano, Seth Jones, and Victor Hedman.

The third Canuck at the event, Jacob Markstrom, had no choice for what event he’d take part in. The goaltenders, who have been part of other skills relay events in the past, will take part in just one event this year: the Save Streak competition.

Each goaltender will face a series of shooters, as in a shootout, and the longest streak of saves wins. Markstrom might have a decent chance: among the 48 goaltenders that have faced at least 100 shots in the shootout over the past couple decades, Markstrom has the fourth-best save percentage in the shootout.

Of course, that all depends on hitting a hot streak or perhaps a series of shooters that try to get fancy and make mistakes.

Neither of the two winners of the Save Streak competition since it was introduced in 2018 will be at this year’s event. Henrik Lundqvist won last year and Marc-Andre Fleury the year before. Markstrom is actually replacing Fleury at All-Star Weekend after the veteran bowed out.