A decade apart in age, Quinn Hughes and Jacob Markstrom both head to their first NHL All-Star Game 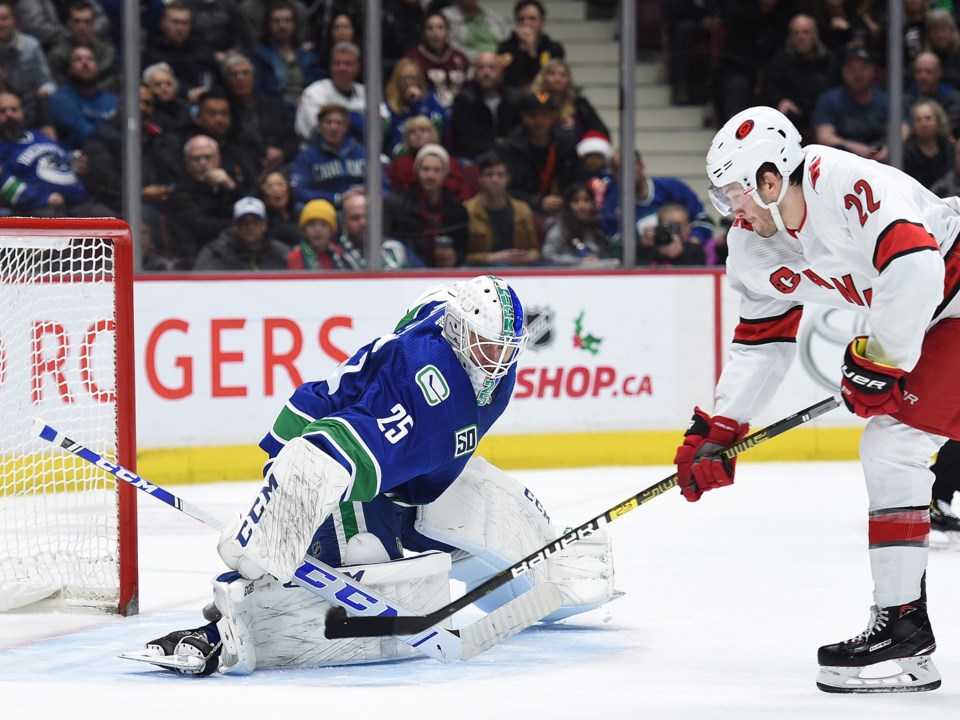 Jacob Markstrom makes a save against Brett Pesce of the Carolina Hurricanes. photo: Dan Toulgoet

For a long time, Jacob Markstrom was considered a blue chip prospect, the type of prospect teams dream of drafting. He was selected with the first pick of the second round at the 2008 draft, but his post-draft dominance in the Swedish Hockey League and the World Junior Championships had teams kicking themselves that they hadn’t taken him in the first round.

Instead, Markstrom took a long, arduous path. He bounced between the NHL and AHL for years with the Florida Panthers, then spent almost a full season in the AHL with the Utica Comets after his trade to the Canucks. Markstrom didn’t become a full-time starter in the NHL until the 2017-18 season, when he was 27 years old. That wasn’t the path he was expected to take when he was named one of the best goaltending prospects in the world all those years ago.

While it was a long road, at least Markstrom arrived at his destination. Markstrom was the third goaltender selected in the 2008 draft and the two goaltenders that went in the first round, Chet Pickard and Tom McCollum, have combined for three NHL games. Meanwhile, Markstrom, nearly 12 years after he was drafted, will head to his first-ever NHL All-Star Game this week.

At the other end of the spectrum is Quinn Hughes, who was also a blue chip prospect, but spent a lot less time as one.

Hughes is nearly ten years younger than Markstrom, but they’re heading to their first ever NHL All-Star Game together. Hughes was drafted in the first round in 2018 and spent just one season as a Canucks prospect before becoming a Canucks star.

At barely 20 years old, Hughes is already the Canucks’ best defenceman and a key reason why the team is first in the Pacific Division at the All-Star break. The hectic schedule of the NHL — they play twice as many games as in college hockey — means that Hughes has barely had enough time to grasp just how well his rookie season is going.

“I’m just worried about tonight and then tomorrow, day-by-day,” said Hughes before the Canucks’ game against the San Jose Sharks on Saturday. “As it gets closer...it’ll probably sink in. For me right now, I think I’ve done a really good job of sticking to the moment.”

Fortunately for Hughes and Markstrom, they’ll have someone along for the ride at All-Star Weekend in St. Louis that has some previous experience with being an All-Star: the grizzled veteran, 21-year-old Elias Pettersson.

Pettersson, like Hughes, spent very little time as a blue chip prospect and is already heading to his second All-Star Weekend, where he’ll look for a little redemption.

While Pettersson fit right in at last year’s All-Star Weekend, including an impressive performance in the Fastest Skater competition, there’s one thing still stuck in his craw. In the Puck Control Relay, Pettersson did the one thing you’re not supposed to do: he lost control of the puck. On the very first obstacle, deking through a series of pucks, the puck slipped off his stick and slid to the boards.

He tried to make up for the error with some razzle-dazzle on a later obstacle, flipping the puck through his legs, but the damage was done. When asked about the skills competition, that error was at the forefront of his mind.

Unfortunately for Pettersson, that event has been discontinued this year. Instead, he'll take on the Hardest Shot competition instead, where there are fewer opportunities for embarrassment, but also no opportunity to redeem himself in puck control.

Hughes, meanwhile, will take on the Fastest Skater competition, as is fitting for his elite skating ability.. As for Markstrom, he has little choice: the goaltenders will take part on the Save Streak event and little else at the Skills Competition.

58 - The Canucks entered the All-Star break with 58 points in 49 games, landing them first in the Pacific Division. At this time last year, the Canucks had 52 points in two more games, so they’re on-pace for a significantly better season.

51 - With 51 points in 49 games, Elias Pettersson leads the Canucks in scoring and is 15th in the NHL. The Canucks have four players in the top-50 in scoring: Pettersson, J.T. Miller, Brock Boeser, and Bo Horvat.

A tap of the stick to the Canucks for bringing back the popular Young Stars prospect tournament in Penticton. The Canucks prospects will face the prospects from the Winnipeg Jets, Calgary Flames, and Edmonton Oilers prior to the start of training camp next season. You can credit Ken Holland for pushing hard for the return of the tournament.

I’m dropping the gloves with the Pacific Division, which is way too tight for the Canucks and their fans to get comfortable in first place. Four teams are tied with 57 points, one point behind the Canucks. It’s still going to be a tough battle to make the playoffs.