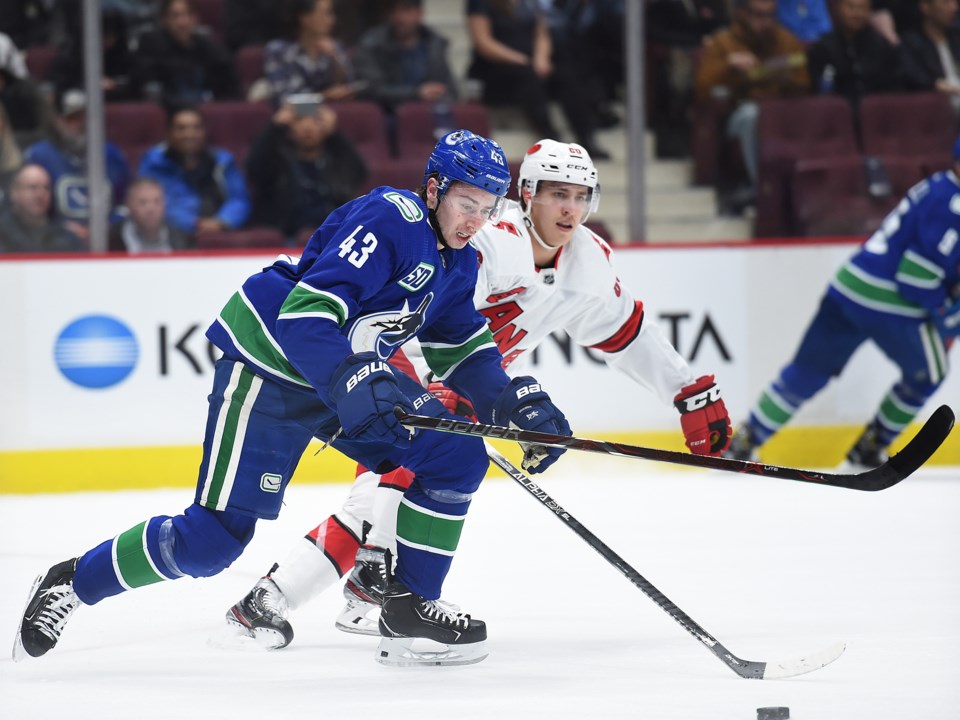 Quinn Hughes fights off a check to carry the puck up ice for the Vancouver Canucks. photo: Dan Toulgoet

Such was the reaction when Harman Dayal of The Athletic presented his well-reasoned argument that the Canucks’ Quinn Hughes is the best player from the 2018 NHL Entry Draft. That rattled some cages and Buffalo Sabres fans, in turn, rattled their, well, sabres.

After all, the Sabres’ Rasmus Dahlin, picked first overall in 2018, is supposed to be the best player from that draft. There’s a reason he was picked first and made his NHL debut at the tender age of 18, tallying 44 points in 82 games in his rookie season, the second-best season ever by an 18-year-old defenceman.

In fact, Dahlin was frequently described as a “generational” talent heading into the 2018 draft and the hype didn’t die down after his rookie year.

Dayal’s article also upset Carolina Hurricanes fans, aggrieved that anyone would think Quinn Hughes is better than their beloved Andrei Svechnikov. It even upset Colorado Avalanche fans for some reason, who were upset that Cale Makar, their star rookie defenceman — who was drafted in 2017, not 2018 — was not part of the conversation.

In the same article, another scout said, “[Miro] Heiskanen is No. 1 on my list. He's a Scott Niedermayer, a generational-type guy.” So, generational talents may not come along often, but two of them came along in the same draft, apparently.

His former coach with the US National Team Development Program, John Wroblewski, said of Hughes, “He’s another generational-type talent, and he’ll be an influence on defencemen for years to come.”

Generational could be defined as “once in a generation” or “best in their generation.” The fact that we’re talking about all of these defencemen, comparing them with each other, and arguing over who is better makes it very clear: none of them are generational.

The word “generational” gets thrown around so much that it begins to lose all meaning. So, let’s try to bring it back down to earth a little bit and define the term a little better.

A generational talent has to be someone that sets themselves apart from other players of their generation. To be clear, a generation in hockey isn’t the same as a generation in the real world, which can typically range from 15-25 years. The next generation typically starts when the previous generation begins to reach adulthood, with some wavy lines between the generations.

In hockey, a “generation” is considerably shorter because the “lifespan” of a hockey player is much shorter. Even the best players in the NHL rarely play more than 20 years. Once a player reaches his late twenties, he’s deemed a veteran and the next generation of players comes along, just 6-8 years younger.

Connor McDavid is less than 10 years younger than Sidney Crosby, but no one considers them to be in the same generation of hockey players. Thus, they can both be generational talents while playing in the NHL at the same time.

Technically, they fall into different generations in the real world too: McDavid falls into Gen Z, while Crosby is clearly a millennial, what with his disdain for hard work and love for avocado toast.

That gives us another out: we can describe a player as a generational defenceman.

Bobby Orr was clearly a generational talent all on his own, but trying to figure out who else qualifies as generational among defencemen gets dicey. It’s probably safe to describe Nicklas Lidstrom, a dominant all-around defenceman, as generational, but he’s also from the exact same generation as Jagr. Which one of those gets the “generational” tag?

Just like the Hart Trophy for Most Valuable Player always goes to a forward by default, with only the occasional nod to a defenceman or goaltender, we’ll be just as unfair to defencemen. Jagr gets to be the generational talent and Lidstrom has to settle for being the generational defenceman. Hey, I don’t make the rules (except I’m totally making up these rules).

Who else qualifies as a generational defenceman? Denis Potvin, Paul Coffey, and Ray Bourque could make an argument. After Lidstrom, you could make a case for Erik Karlsson, but that’s a 20 year gap in age. Is there anyone in between that fits the bill? Scott Niedermayer and Chris Pronger are arguably from the same generation as Lidstrom. Zdeno Chara? Duncan Keith? Shea Weber? Somehow the “generational” tag doesn’t quite seem right.

Then there’s the current generation. There’s no way to positively declare that any of Hughes, Makar, Dahlin, or Heiskanen is the best defenceman of his generation. At least, not yet.

There’s a chance that one of those defencemen will set themselves apart in the coming years and make a claim to be a true generational defenceman. Until that happens, hold off on the hype. The word “generational” is likely best used when looking back, not looking ahead.

It’s also entirely possible that no one defenceman separates himself from the pack. This could be a generation without a definitive best defenceman, because the gap in talent between the best players has shrunk considerably since the days of past generational talents.

Even if we look at the current generational talents for whom there is little argument, the gap between them and the next best star player is slimmer than it ever was in the past. Is Connor McDavid that much better than Nathan MacKinnon and David Pastrnak?

Maybe the word “generational” is one best left in the past.

If Quinn Hughes goes to the All-Star Game, it won’t affect the Canucks’ salary cap situation
Jan 1, 2020 7:27 AM
Comments
We welcome your feedback and encourage you to share your thoughts on this story. We ask that you be respectful of others and their points of view, refrain from personal attacks and stay on topic. To learn about our commenting policies and how we moderate, please read our Community Guidelines.