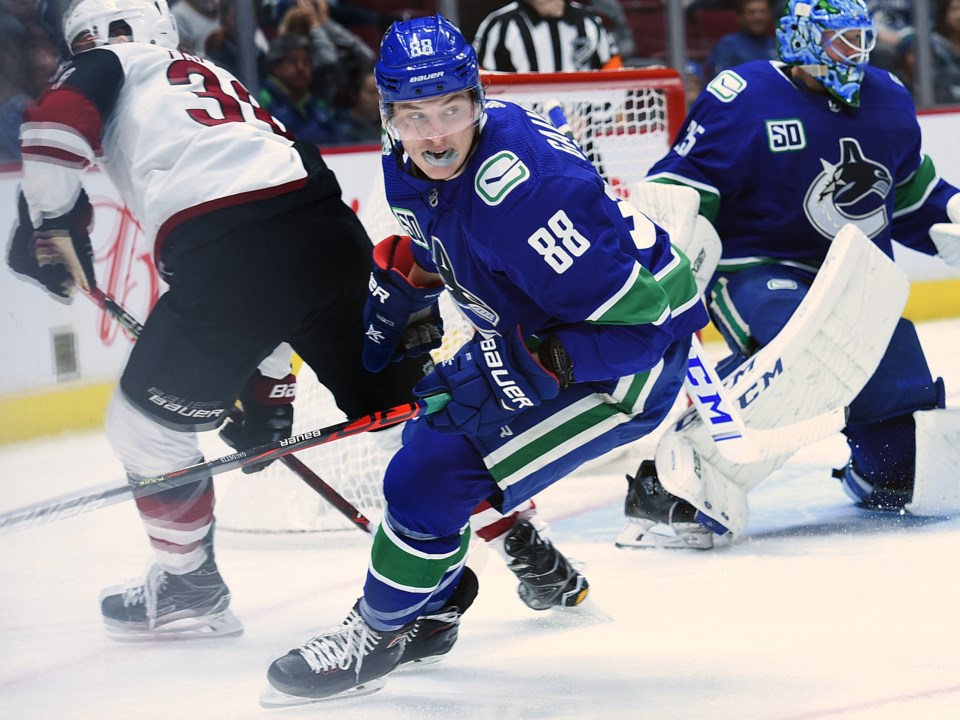 Adam Gaudette turns up ice for the Vancouver Canucks. The forward entered into the NHL's COVID-19 Protocols on Tuesday, March 30 after testing positive for the coronavirus. Photo: Dan Toulgoet, Glacier Media

Three days after forward Adam Gaudette was pulled from the ice mid-practice due to a positive COVID-19 test, an increasing number of Vancouver Canucks appear to have contracted the virus.

Both TSN and Sportsnet reported Friday morning that six more Canucks players have now tested positive for the coronavirus, bringing the team's current total of positive results to eight players and one member of the team's coaching staff. These reports have yet to be confirmed by the club.


In response to a request for confirmation from Vancouver Is Awesome, a spokesperson for the team pointed toward a statement released by the NHL yesterday announcing that the team’s games have been postponed through Tuesday, April 6 at the earliest, as a result of two Vancouver Canucks players and a member of the coaching staff entering into the NHL’s COVID protocols.

"Pending test results in the coming days, it is expected that the Canucks will be able to resume their game schedule on Thursday, April 8, with a return to practice not occurring before April 6," yesterday's statement read.

On Thursday, Hamonic was revealed to be the second Canuck after Gaudette to test positive by the NHL's COVID protocol list. He last skated with the team on Wednesday.

Hamonic's status is particularly disheartening considering his family history. As a member of the Calgary Flames last season, the 30-year-old defenceman opted out of the summer Stanley Cup tournament due to his concerns about the COVID-19 pandemic after his daughter was hospitalized with a serious respiratory illness a year prior.

“We saw what a respiratory virus can do to our healthy little girl. And it's something no parent wants or should go through. Now, blessed with our second child, a baby boy, the risk of today's COVID-19 pandemic is a very difficult one to weigh as parents," he expressed in a statement released through his agency at the time.

“I wish I could lace up my skates and be out there battling, blocking a shot, and helping the team win. But my family has and always will come first. Being my little kids' dad every day is the most important job I have.”
Throughout the hockey season, the NHL has used its COVID protocol list to share names of players who have been rendered "unavailable” to practice, travel or play for their respective clubs due to the virus.

These “COVID Protocol Related Absences” can come as a result of an initial positive test—a player receives a second test to confirm the first, and if that second test is negative, he'll be tested again. Alternatively, players who are experiencing symptoms or players who have been identified as high-risk close contacts of a confirmed positive case will also be required to isolate under the league's COVID protocols.

Yesterday, Gaudette's wife, Micaela, took to Twitter with an update on both her and her husband's conditions. "I’ve been feeling fine other than being tired and I just woke up with a bad headache," she shared. "My hubby isn’t in great shape but I’m taking good care of him! Thank you to all that have said kind things to us during this time."

It hasn't been all kind messages, evidently. In a separate tweet, she wrote, "People on Twitter are ruthless. A human being gets sick with a virus we don’t know much about and [ya'll] are angry at him because you cant watch a game on tv?"

On Friday, the NHL announced that a game between the Ottawa Senators and Winnipeg Jets, originally scheduled for May 7, will now take place on Monday, April 5. "The rescheduled date is a result of recently postponed games affecting the Vancouver Canucks and Winnipeg Jets," the league wrote.

- With files from Daniel Wagner