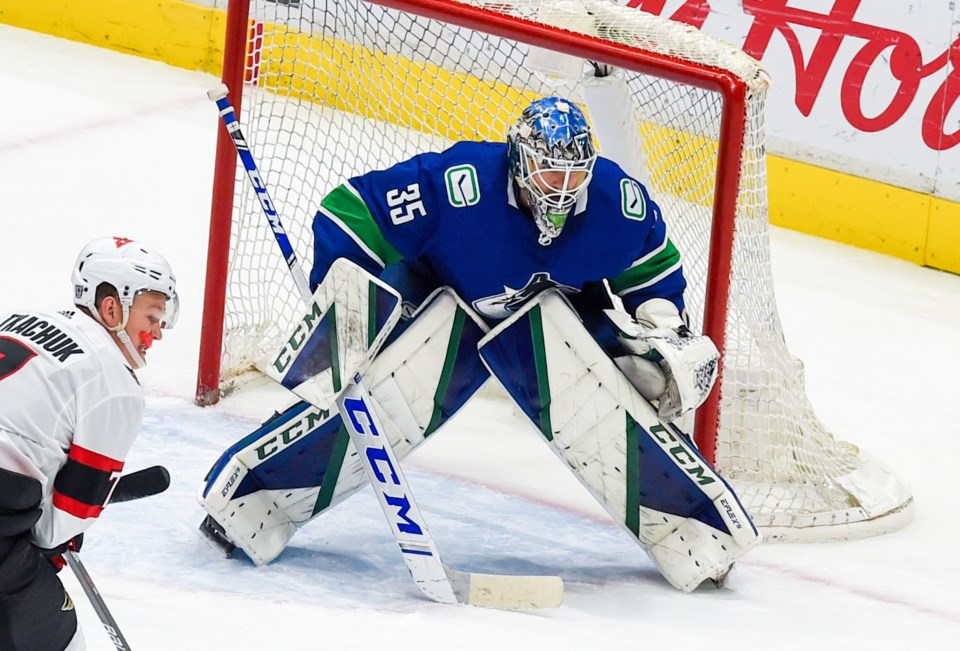 Thatcher Demko spoke out about his goaltending coach Ian Clark, who does not have a contract from the Vancouver Canucks for next season.Bob Kronbauer / Vancouver is Awesome

Amidst all the hubbub on Tuesday over Daniel and Henrik Sedin potentially joining the Vancouver Canucks front office and reports that Jim Benning will return as the team’s general manager, one of the most important stories might have gotten lost in the noise.

That story? The team’s young number one goaltender practically begging the team to bring back his goaltending coach.

Fresh off a 38-save performance against the Calgary Flames, Thatcher Demko was asked whether he was concerned about the Canucks coaching staff and they’re expiring contracts. That includes goaltending coach Ian Clark, who has helped develop Demko into a number one goaltender.

“Clarkie is unbelievable. I owe probably just about everything to him. I don’t speak too much about him in the media,” said Demko. “Obviously, I’m putting in the work, but the way he’s guided me and mentored me, it’s been amazing. I desperately hope that they can figure something out and have him return.”

It’s that word “desperately” that sticks out. It’s rare for a player to speak publicly like this — Demko even noted that he hasn’t spoken to the media about Clark — which makes it abundantly clear just how badly Demko wants Clark to stay.

"There's a good chance he walks."

Goaltenders and their coaches work closely on a day-to-day basis. They develop close relationships but, beyond that, goaltenders know when a coach is improving their game. Coaching goaltending at a high level is a speciality and there are few goaltending coaches that compare to Clark.

The contract situation for Clark has been a concern for months. In early March, Kevin Woodley, who writes for NHL.com and OnGoal Magazine, started sounding the alarm on Clark back in March. Few writers in hockey can compare to Woodley when it comes to connections within the goaltending world, so it was worth sitting up and taking notice.

“If there isn’t a deal in place at this point, March 9th, then I’m not sure he’s back next year, because this is exactly the time of year when he made up his mind in Columbus, three years ago, that he was out,” said Woodley at the time. “The fact they haven’t negotiated with this coaching staff and included him in that process, as a guy who doesn’t have a contract for next year, I think there’s a chance he walks. I think there’s a good chance he walks.”

That there’s still no contract two months later makes it all the more likely that Clark won’t be back next season. As one of the most well-respected goaltending coach in the NHL, he would have plenty of other employment opportunities if he left the Canucks.

"I really hope he gets back here."

That’s a problem for the Canucks, who have relied heavily upon their goaltending to keep them even close to competitive over the last several seasons. Demko’s emergence as a bonafide number one goaltender has been one of the few positive stories from this season.

“I think the momentum that he and I have right now is exciting and I think there’s still a ton of room for me to grow,” said Demko. “The work that Ian and I have put in over the last two years — just the habits and routines and the way that we’re able to think the game and be on the same page — is something that I’d love to continue to do down the stretch here in the next few years. I really hope he gets back here.”

When Clark worked for the Columbus Blue Jackets, he coached Sergei Bobrovsky to two Vezina Trophies. After Clark left Columbus, Bobrovsky’s save percentage fell to league average the following season, then fell off a cliff when he went to the Florida Panthers. He hasn’t been the same goaltender since.

Jacob Markstrom developed into one of the best goaltenders in the NHL under Clark’s tutelage. This past season, he saw his save percentage drop to .904 away from Clark with the Calgary Flames.

Still, it seems foolhardy to let a coach like Clark go when the team knows how well he’s done developing and coaching their goaltenders. Demko certainly knows how well he works with Clark and, if Demko is expected to be the team’s number one goaltender for the future, why wouldn’t the Canucks do whatever it takes to keep the coach that has helped him succeed?

Unfortunately, at this point it might already be too late.