No one knows where the Vancouver Canucks will be playing this season, but at least we know when. Approximately.

No one knows where the Vancouver Canucks will be playing this season, but at least we know when. Approximately.

It’s as yet unclear if the Canucks will be allowed to play their home games in Vancouver given B.C.’s COVID-19 restrictions. It’s still up in the air whether or not they’ll be playing in Canada. That hasn’t stopped the NHL from releasing the 2020-21 schedule, even if the Canadian teams all say that times and arenas are TBD — To Be Determined.

The Canucks season kicks off with back-to-back away games against the Edmonton Oilers, then another pair of back-to-back home games versus the Montreal Canadiens the following week. That might seem to be a sign that the Canucks can expect plenty of back-to-back games throughout the season, but that’s surprisingly not the case.

In fact, the Canucks have the fewest sets of back-to-backs in the all-Canadian division, which has been named the North Division. The Canucks will play seven back-to-backs, while the Ottawa Senators will have 11, the most in the North.

As a result, the schedule is surprisingly friendly to the Canucks, who have had to deal with some tough schedules in the past. According to analysis from Micah Blake McCurdy at HockeyViz, the Canucks have the most favourable rest schedule in the entire league.

Vancouver has the most favourable rest schedule, Montreal and Edmonton the least favourable. pic.twitter.com/SvIDNMvWEV

A “tired” team is one that played the previous night. A “rested” team didn’t. The Canucks will play a rested opponent while tired just once next season, but will play a tired team while rested six times. The Canucks also get a six-day break near the end of March, a lengthy break not every team gets.

The relatively few back-to-backs and the favourable schedule could be a boon to the Canucks in a compressed 56-game schedule. While they’ll still be playing a lot of games in a short amount of time — most of their schedule has them playing every other day — having fewer back-to-backs will give players that little bit extra time to rest between games. It’s not much, but even a small advantage could make a difference. 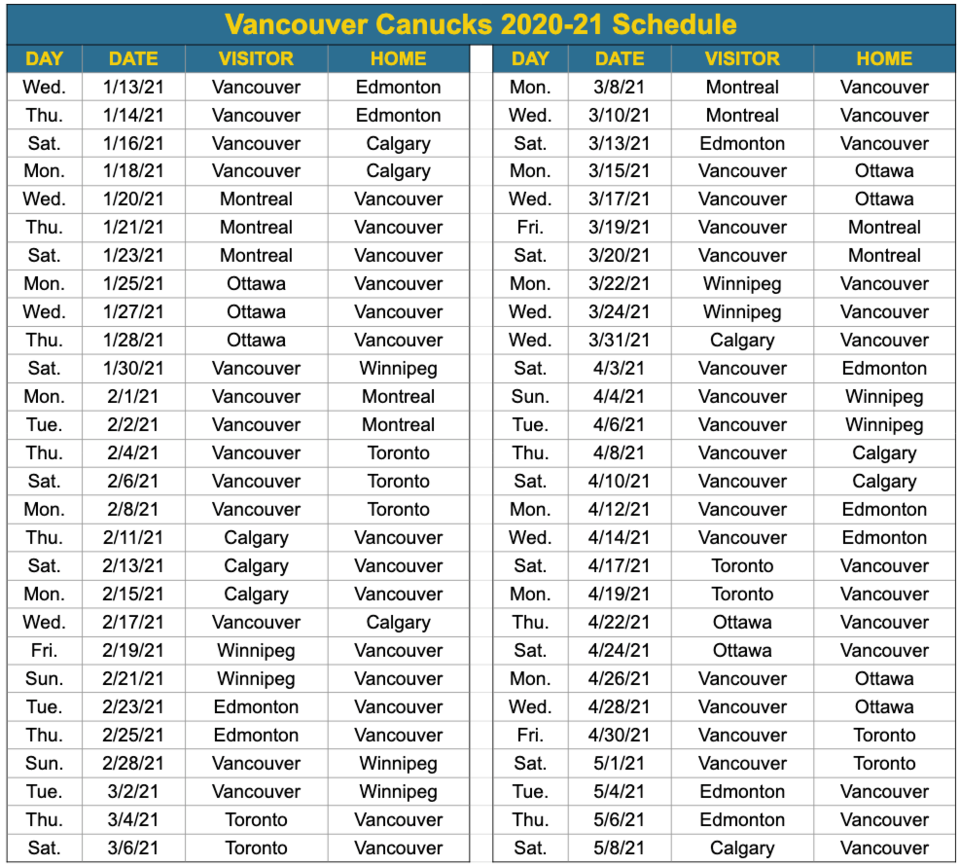 The efforts to limit travel are immediately clear. The Canucks will typically face the same opponent two or even three games in a row, either at home or on the road. The Canucks will play a team for just one game without an immediate rematch just five times throughout the season.

The Canucks will even play four-straight games against some opponents, albeit split between home and away.

In February, the Canucks will face the Calgary Flames in four-straight games, a series that has the potential to reignite the dormant rivalry between the two teams, particularly with the Flames signing so many former Canucks.

Finally, to finish off the season the Canucks will play their usual divisional opponents, the Flames and Edmonton Oilers. Those three games in early May could still have playoff implications, making for a thrilling end to the regular season.

So, we know who the Canucks will be playing on what day. Now we just need the time and the place.