The definitive ranking of the Canucks’ pups, dogs, and good bois 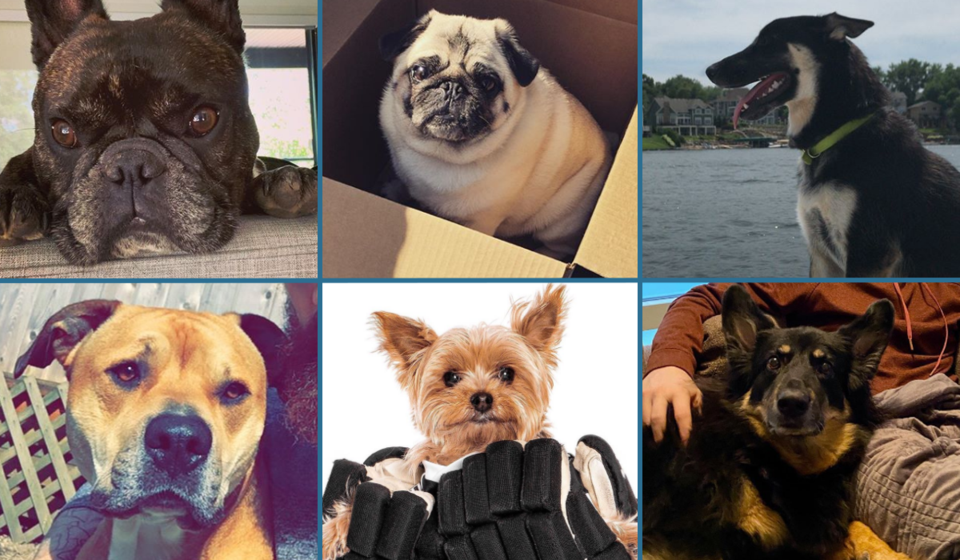 The Canucks may not have put on the best show of their lives in last week’s loss to the Minnesota Wild, but their Best in Show event sure did.

The team’s first ever “Top Dog” race during the second intermission of last Wednesday's game featured a selection of Canucks players’ dogs and was an instant hit among fans. Emma Pearson took home the gold, with rookie Zeus Gaudette and fan favourite Phoebe Stecher rounding out the podium.

So what better way to commemorate this event and its cute competitors than by ranking each of the Canucks’ furry friends and breaking down how they’ve found so much success in Vancouver.

For the record this list may be numbered, but at the end of the day they’re truly all 14/10's.

Sven Baertschi might be a Utica Comet right now, but there’s never a bad reason to talk about his son, Bear. A seven-year old husky who thanks to massive puppy paws, his parents knew he’d be a perfect fit in Vancouver from the moment they saw him at a shelter in Seattle.

Huskies are high energy dogs that thrive off of plenty of playing time. Hopefully he’s getting that time he craves in Utica and maybe we’ll get a chance to see Bear in Vancouver again soon.

Jordie Benn is currently the only member of the Canucks with two dogs, Lilli the Cavalier King Charles Spaniel and Juice the Pit Bull. Like Benn himself, Lilli and Juice initially went unadopted before being signed from shelters for their tireless efforts at chasing tennis balls. Now the furry siblings have become important emotional leaders for their family teammates.

Whose ready for hockey to start back up? Sported my @benchclearers Jerseys all summer long. Click the link in bio to rep your favorite team all year round... better be The Canucks. #benchclearers #weareallcanucks

Juice’s biggest attribute is his size and while he might seem rough around the edges, he has a true team oriented spirit. And Lilli may not have the size of her big brother, but has the tenacity that’s required to play with the dogs double her size. Just goes to show you that rescue dogs always defy the odds.

The trade deadline brings new faces to new locales, and this year’s was no exception. But Tyler Toffoli and Louis Domingue aren’t the only new Canucks to get excited about.

Dodger is a 10 year-old Yorkie who comes to Vancouver after spending the last decade playing in Los Angeles. His time there saw the Kings win a Stanley Cup as a member of one of history’s most stacked hockey dog lineups.

Aside from the silky mitts on display, Dodger also shares his dad’s excellent hockey flow and some excellent dog park chemistry with Emma Pearson. You don’t wanna be on the opposing side of a tug-of-war match when those two have the rope. We can’t wait to see what Dodger brings to the table with this Vancouver team over the next couple months.

Zeus Gaudette is one of the youngest members of the Canucks organization, but like his owner Adam he thrives on proving people wrong. Zeus has tremendous speed which was on full display when he finished second in the team dog race.

Don’t let his size fool you, Zeus can play rough with even the largest dogs at the park and can get under their skin when he routinely beats them to loose tennis balls in their own end of the field. He even shares a hairstyle with Adam; business in the front, party everywhere else.

Second place isn’t too bad for the smallest dog in the race! Clearly he was having too much fun and didn’t want it to end 😅

Everybody loves pugs, and Riley Tanev has become a new Vancouver favourite thanks to Chris’s recent jump to Instagram.

Pugs are never the fastest or most majestic dogs, but their steady approach to life and goofy smile have made them a key piece of the dog world. Riley checks all those boxes in the same way his dad does on the Canucks’ blue line. We can only hope we keep getting elite performances from Riley like his debut as Santa Paws back in December.

Another integral part of the Kings’ dynasty in the early 2010s, Emma Pearson is a German Shepherd mix who gained early success after winning LA’s Bark Madness competition back in 2016.

After a brief stop in Pittsburgh, Emma joined the Canucks at last year’s trade deadline and has become a huge part of Vancouver’s canine crew. German shepherds are known for their IQ and ability to work in numerous different roles, something that Pearson has shown off in spades during the past season and a half to put her just behind the top three.

Thanks @hushblankets for the blanket! It’s now my favorite thing to use after games! You can use code TANNER FOR $40 off 😊

Gus Horvat is both a four-year old French Bulldog and a legend of Canucks social media.

Much like his dad, Gus is a true leader both at the dog park and on Instagram. His 9,400 followers make him the most followed Canuck dog on the site, and he’s just as marketable as Captain Bo. He can even rock a Flying Skate jersey.

He might not have the flash of a Boeser or a Toffoli, but Gus is such a steady and skilled presence that has played with nearly every other dog on the team at some point. And every now and then, he’ll surprise you with his tremendous speed.

Troy from Richmond has been a fan favourite since the day he joined the Canucks, but it went to a whole new level when he adopted Phoebe the Bernese. Phoebe’s Instagram account has nearly 6,000 followers and routinely showcases her adventures around Vancouver.

Phoebe is such a fan favourite that one fan gifted Troy an amazing painting of the Bernese beauty.

Bernese Mountain dogs thrive in working situations and generally have a very positive temperament, something that Phoebe shares with Troy. It’s hard not to have such a great outlook when you get the rare opportunity to play in your own backyard each and every night.

It’s not often you meet your best friend at an All-Star Game marketing event, but that’s exactly how Coola the husky/shepherd mix met Brock Boeser back in 2018.

Brock found Coola when the humane society brought shelter dogs into the All-Star hotel for a photoshoot, and instantly knew he was coming home to Vancouver with him. After spending some time at Boeser’s parents home in Minnesota developing out of his puppy habits, Coola and his beautiful blue/brown eyes eventually joined Brock in Vancouver where he’s become a true superstar.

He made it #coolie 😏

He might sit out a couple social media posts here and there, but always follows it up with a great run in cuteness per picture average. Seeing Coola grow before our very eyes has been an absolute treat for Canucks fans.

Oh no, I said treat. Hide the milk bones.