THE FARMHOUSE: Brogan Rafferty is killing it with the Utica Comets

The Canucks prospect leads all AHL defencemen in scoring; could we see him in Vancouver this season?
Cody Severtson Feb 7, 2020 12:50 PM

The Farmhouse is a regular feature where Cody Severtson heads back to the Canucks farm in Utica to bring back bountiful harvests of prospect updates, news, and analysis.

April 1st is the worst day in hockey. On a day when it’s difficult to discern real breaking news from fake accounts, joke announcements, and memes, it’s genuinely an awful time to announce anything if you’re a pro-sports organization. The first reply to anything on this day is almost always, “Is this a joke?”

On April 1st, 2019, the Vancouver Canucks announced the signing of Quinnipiac University defenceman, Brogan Rafferty, to a one-year entry-level contract.

Canucks nation flocked to the internet to find out more about Jim Benning’s latest NCAA acquisition, but the search results that popped up didn’t exactly dissuade anyone from thinking this was an April Fools joke. Let's just say that Brogan Rafferty shares a name with another Rafferty of note.

"Type in hockey after my name or you're in for a scare." Said Brogan in a piece from the Canucks media team that carefully addressed a very bizarre situation in a fashion that was as light-hearted as possible.

After signing, Rafferty played two games during the conclusion of the 2018-19 season, which yielded fantastic praise from head coach, Travis Green, which did wonders for Rafferty’s search results. Now you’re a lot more likely to find the hockey player than a gruesome true crime story.

The Canucks have had both hits and misses with college free agents; Canucks nation was hopeful that the scouting team, who had been eyeing Rafferty for a considerable amount of time, might have struck gold with the 6’2” 192 lb. right-shot d-man.

Rafferty has had a fantastic year with the Utica Comets. He leads all defencemen in the AHL with six goals and 33 assists and he’s 19th in overall AHL scoring and fifth overall among rookies. Not a bad debut for a guy who didn’t start playing defence until he was in his senior year of high school.

Before playing defence, Rafferty was a forward, struggling to get noticed in the USHL system. A change to a new position, brought on at the advice of his father, is what eventually got Brogan noticed by the NCAA and, eventually, the Canucks.

“I said the game has changed, Brogan, they need puck carrying defencemen now,” his father Brian said to the New Haven Register back in 2016.

Brian was right: the modern NHL is all about puck-carrying defencemen, and Rafferty’s dynamic skating and puck-moving abilities have been a treat to watch this season, as Brogan surges up the scoring charts of the AHL.

The surprise of Rafferty’s instant success in the AHL couldn’t have come at a better time for the Canucks farm club either. Of the six defencemen returning to the Utica Comets for 2019-20, only two had eclipsed ten points in the season prior. There was no certainty that any of the returning defence corps would be able to fill the voids left by the departing Evan McEneny, Jesse Graham, and Jaime Sifers.

Not only has Brogan Rafferty surpassed all those departing defencemen's point totals, but he is currently on pace for a debut season point-total that would eclipse the 2018-19 point totals of all the returning defencemen combined. 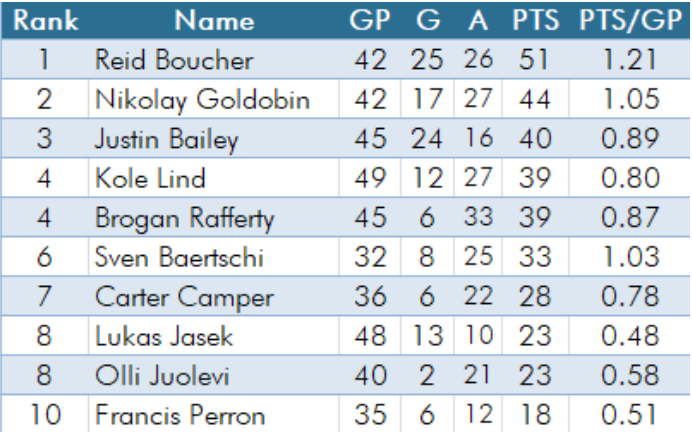 I don’t think I’m understating how impressive Rafferty’s season has been for the Utica Comets this year.

The guy has a wicked bomb of a shot, like this clapper he laid on Mikko Koskinen during the Canucks preseason.

One of the concerns coming into this season was the lack of a point-shot option from the returning defence group. Of those six returning defencemen from the 2018-19 Comets squad, none were renowned for their ability to hit the net from the point. That role was almost exclusively left to McEneny and the veteran Sifers.

It appears as though that presumption was still correct heading into this season, as Brogan Rafferty leads all Comets defensemen with the lowest rate of missing the net.

Good thing too, because with his quick release, Rafferty has been able to catch goalies off guard on more than one occasion with lasers such as this one on Belleville’s Joey Daccord, that unfortunately ripped off the post.

You can tell that his old forward instincts take over whenever he’s playing deep in the offensive zone. While those instincts sometimes get him into trouble when play gets broken up, they occasionally lead to gorgeous goals from impossible angles, like this goal against the Bridgeport Sound Tigers’ Jared Coreau, from behind the goal line.

Canucks coaches Travis Green and Nolan Baumgartner have given their defencemen the green light to jump up in the play, but I don’t know if roaming up to play as the net-front presence is what they had in mind. But this greasy Rafferty scored to put the Comets within one against the Rochester Americans might convince them that Rafferty, at least, should be allowed to do so.

It’s always good to have guys who give you options, and Rafferty’s versatile attack with his shot is what makes him such an intriguing option as a call-up. 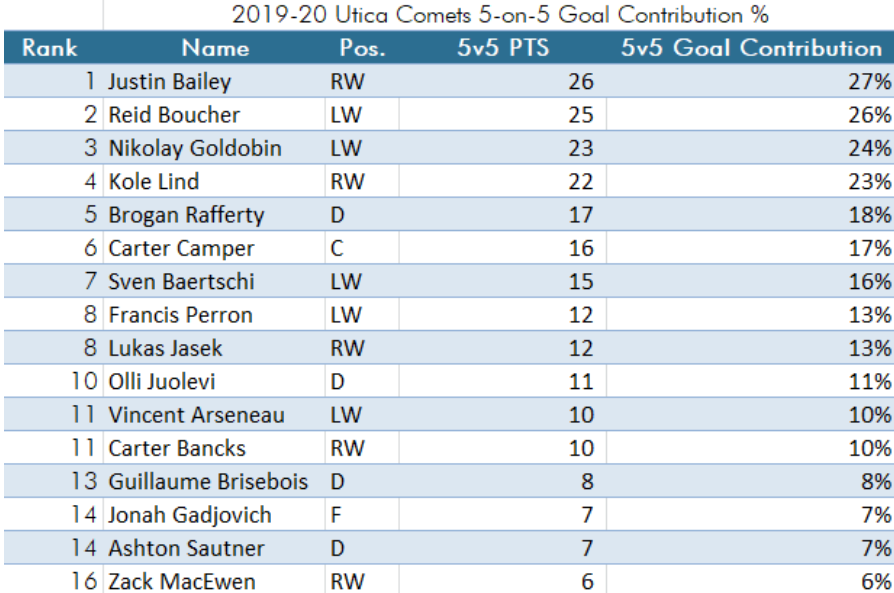 Rafferty’s best attribute to his game is his skating, without a doubt.

Making the rounds on twitter during the Comets February 5th game against the Laval Rocket was a highlight-reel end-to-end rush through the entire Rocket lineup, which almost resulted in a goal.

While the defence on that drive is entirely suspect, I do have to note that the move, in general, is quite common from Rafferty. The man loves to accelerate through neutral-ice to gain the zone for himself.

I have to believe that once Rafferty transitions that puck past his opponent's blue line, a switch turns in his brain that turns on his power forward mode, allowing him to put on a dazzling display of dangling to dish the puck into the net. Take this play, for example, where Rafferty shows off a Pettersson-like deke between his own legs to get around the Toronto Marlies’ Tim Liljegren for a shot on goal.

Which defender currently on the Canucks, or in the Canucks pipeline is solo-moving the puck through neutral-ice, dumping the puck, forechecking to catch the dump-in, retrieving it, then centring the puck into the high-slot for a shot-attempt like Rafferty did against the Binghamton Senators?

The major asterisk in all of this is that AHL defending is nowhere near the level of NHL defending. Rarely do players play the body, and as a result, these gorgeous solo-drives into the offensive-zone for shot-attempts happen frequently, both for and against the Comets with Rafferty on the ice.

The confidence that Rafferty exudes while handling the puck in motion extends to his play in the defensive zone, where he is cool and calm. Sometimes his confidence offensively leads to giveaways or mistakes, but they are always met with a concerted effort to recover the puck.

Whenever he does make unforced errors, there is never a sense of panic to make up for the mistake. His calm demeanour on the ice never lends to a sense of concern. Consider this play against the Laval Rocket where he gave away the puck during a breakout attempt from the defensive-zone, only to eventually recover with a calm breakout pass to Carter Bancks.

Rafferty isn’t afraid to get physical either and, at 6’2” 192 lbs, he can throw his weight around. Binghamton’s Ryan Schmelzer learned this first hand after Rafferty laid a crushing hit behind his net.

Defence is an aspect of Rafferty's game that he feels confident in and he believes he can be a good two-way defenceman at the NHL level.

"I take pride in my defending and I can get physical at times when I need to," said Rafferty at Canucks development camp. "I used to be just an all-offence kind of guy. Then in college, I developed the defensive side of my game with the help of the staff there, they were awesome for me. So I like to just think of myself as a reliable two-way defenseman."

It's worth noting that Rafferty is one of the least-penalized players on the Comets. In 45 games played, only four minor-penalties and one double-minor for high-sticking have been assessed against Rafferty. For someone logging as many minutes as he does at 5-on-5, that is a spectacular display of discipline.

That’s not to say that Rafferty is without flaws as a defenceman. Like many defencemen in the AHL, he has many, some more concerning than others.

For instance, that one double-minor was particularly frustrating, as it looked entirely avoidable. Rafferty is clearly going for a stick-lift, but completely misses and smacks a Cleveland player in the face.

That was a game-changing penalty that put the Comets on a four-minute penalty-kill — the Comets got scored on once during that kill — and he’s also had some dangerous giveaways in his own end, like the below play against Binghamton.

Sometimes the mistakes can be just downright frustrating, like the loss of the offensive zone due to Rafferty losing concentration and misjudging the puck while on the Comets powerplay.

The most significant question mark concerning Brogan Rafferty’s place within the Canucks organization is whether a coach like Travis Green could be accepting of Rafferty’s limitations to allow his offensive game to flourish. At the AHL level, giveaways to the opposing team, drop-passes to nobody, or losing possession in the offensive zone are tolerable, since it is a developmental league.

With the Canucks seemingly on the precipice of their first playoff berth in nearly four years, one has to wonder if a coach like Green will be willing to take a player with such high-offensive upside like Rafferty under his tutelage to see what he can do for his club, even if his game comes with significant risks.

"I'm going to go there with a positive mindset and do the best I can and hopefully spend the least amount of time I can down there, no offense to them," said Rafferty during the preseason, "but it's all about trying to develop and get up to the big boy level."

Maybe the time isn’t quite right for Rafferty to step into the NHL, but with the Canucks powerplay struggling the way it is, it sure would be nice to get a look at a guy who can do this: