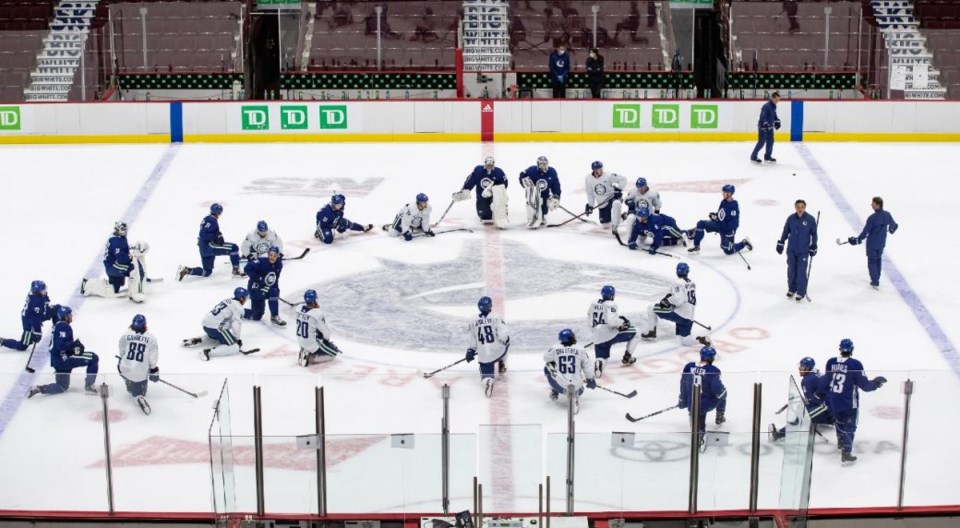 The Vancouver Canucks' COVID-19 outbreak is beginning to run its course.Darryl Dyck / CP

There was a lot of good news that came out of the Vancouver Canucks’ media availability on Friday to discuss their COVID-19 outbreak.

For instance, there have been no new cases for the Canucks organization over the past two days. The last player added to the NHL’s COVID-19 protocol list was Nate Schmidt on Wednesday, bringing their total to 19, plus seven more cases between the taxi squad, coaching staff, and support staff.

“We’re moving away from the new infection phase into the ‘dealing with the infection’ phase and then starting into the recovery,” said team physician Dr. Jim Bovard.

In more good news, the Dr. Bovard and Canucks GM Jim Benning confirmed that for many of those affected, their health is improving and they’ve avoided any hospitalizations. Still, it hasn’t been easy.

“This is a very human situation we’re dealing with...It’s been a tough week,” said Dr. Bovard. “These players go from being hockey players and some of the most resilient, toughest, well-balanced people on the planet to suddenly they're fathers, they're husbands, they're sons, they're brothers.”

There was, however, some bad news. While there haven’t been any new cases within the Canucks organization, the outbreak still hasn’t run its course.

“For the most part, our players are on the other side of it,” said Benning. “We have still family members that are getting sick and the players worry about that.”

That worry was hammered home by Dr. Bovard, who pointed out there are lessons for the general public to take from this outbreak.

“I can speak absolutely emphatically to everybody out there — you do not want to get this virus,” said Dr. Bovard. “So do everything you can to not get this virus, not just for your sake, so that you're not potentially passing it on to others. I see this not just with the hockey players I see this in my practice, and I see the concern it creates in individuals when they worry that they may have given it to their mother or their grandmother or someone else.”

One of the lingering questions of the Canucks outbreak is how it all happened and whether anything could have been done to prevent it.

According to Dr. Bovard, the outbreak did start with one individual, who then spread it to the rest of the team. He emphasized, however, that there’s no blame to be assigned when you’re in the middle of a global pandemic and doing the best you can to follow what you’ve been told by the experts.

“There’s no culprit here,” said Dr. Bovard, “other than the COVID virus itself. Everybody’s been working incredibly hard in the last year trying to avoid getting it and, in spite of their best efforts, this can happen.

“We're seeing that in the community, and what I'm seeing going on here in the organization is not much different than what I'm seeing in my own office with people in all walks of life, all workplaces.”

At the same time, if the individual who initially contracted the virus was following both provincial guidelines and the NHL’s protocol, wouldn’t that mean that neither was sufficient to protect the Canucks from an outbreak?

"The virus is tricky."

For instance, it seems likely that the initial exposure was at a restaurant, likely Glowbal as a Canucks statement identified the location as a “public exposure” and Glowbal was the lone site listed as a public exposure by Vancouver Coastal Health in that timeframe. The NHL’s protocol does not prohibit players and their families from indoor dining, leaving that up to local health guidelines, and B.C.’s provincial health authorities allowed indoor dining up until March 30.

That prohibition on indoor dining was too late to protect the Canucks.

“The virus is tricky and things are evolving,” said Dr. Bovard. “We can say a whole bunch of ‘what ifs’ in different ways but we’ve got to learn from it and move forward.”

“If we could anticipate what it’s going to do next, our jobs would be way easier,” he added.

It’s been known for almost the entire pandemic, however, that indoor dining posed a danger. The Center for Disease Control and Prevention in the U.S., in a page updated December 16, 2020, called indoor dining — even with tables spaced at least six feet apart — higher risk, with the lowest risk being drive-through, delivery, take-out, and curb-side pick up.

In addition, the NHL has said they do not plan to change their COVID protocol, even after the Canucks’ outbreak. The decision to hold a morning skate after Adam Gaudette's initial positive test, something allowed by the NHL's protocol, likely exacerbated the outbreak.

“We're going to work with infectious disease experts, we're going to work with a fellow who's done, I believe, hundreds of these outbreak evaluations throughout the province for all sorts of workplaces,” said Dr. Bovard. “He's going to bring his expertise and knowledge, help us look at it, see what we can learn as an organization, what we can pass on to the league and on to other teams in the NHL and, frankly, in any team sport environment, if there's anything we can pass along that will help them know more, then we will.”

What matters after that is whether those in positions of authority take that knowledge and make the necessary changes to protect people in the future.