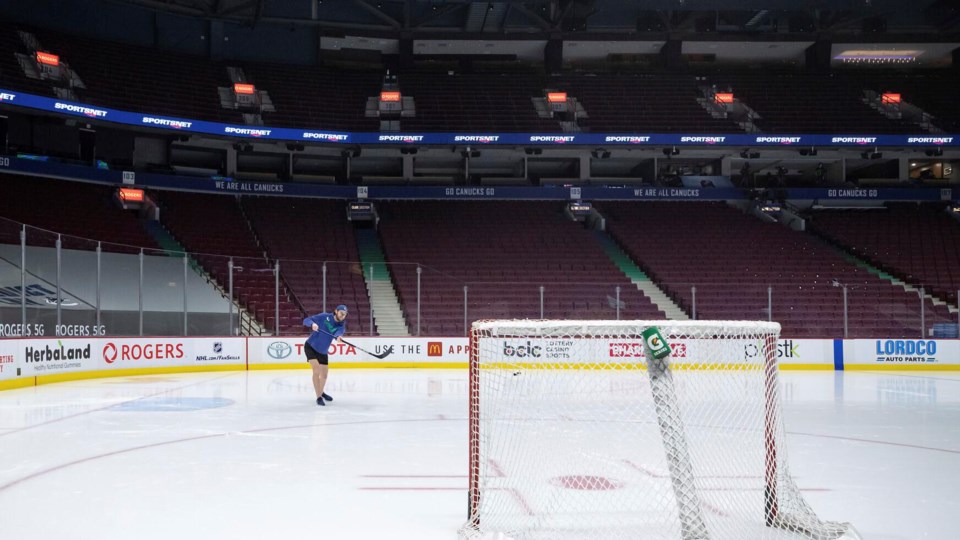 Thatcher Demko takes shots on an empty rink after March 31 game between the Vancouver Canucks and Calgary Flames was cancelled due to a COVID-19 outbreak.Darryl Dyck / CP

The Vancouver Canucks currently have 17 players officially on the NHL’s COVID-19 protocol list. That number doesn’t include members of the coaching staff and taxi squad who have also tested positive for the coronavirus, bringing the current total to 22.

It’s a difficult situation for those affected and their families and the priority has to be their health. The only statement the Canucks have released so far speaks to that priority.

“Our focus continues to be on the health of everyone involved,” read a statement from Canucks’ GM Jim Benning, “and we are thankful for the extraordinary health care and guidance we have received from our team’s medical staff, BC’s health officials, and from NHL and NHLPA medical experts.”

While the health of everyone involved is of the utmost importance, there’s still that lingering question: what happens next?

So far, four games have been postponed for the Canucks but it’s almost certain that more will need to be postponed. With 17 players on the NHL’s COVID protocol list, the odds of the team returning to play on Thursday, April 8, are slim to none.

In fact, the NHL has already rescheduled a game between the Edmonton Oilers and Calgary Flames for Saturday, April 10, in place of a scheduled game between the Flames and Canucks. The Canucks’ games against the Flames on April 8 and 10 now show as postponed on the online schedule despite no official announcement from the NHL

Canucks will be expected to play 56 games

According to NHL deputy commissioner Bill Daly, the Canucks will be expected to complete their 56-game season, necessitating the rescheduling of the six postpone games, as well as any others that might need to be postponed.

Daly called the Canucks’ COVID numbers “concerning from a health and safety standpoint, not necessarily from a scheduling standpoint" according to the Canadian Press.

In a separate email to PITB, Daly said that the possibility of players opting out for the remainder of the season is “not anything that’s been discussed at this point.”

That means the players on the COVID list will be expected to return to action and play out the rest of the 56-game schedule. When they’re eligible to return partly depends on whether they were asymptomatic while isolating or developed symptoms.

So far, we know that Adam Gaudette and Brandon Sutter developed symptoms, as shared by family members. Gaudette’s wife, Micaela, shared that her husband “isn’t in great shape” on her Twitter last Thursday, while Sutter’s father, Brent Sutter, spoke to Sportsnet about his son’s experience with COVID-19.

“Brandon has tested positive and he’s got symptoms — body aches, headaches, chills — just like you have the flu,” said Sutter. “I guess each guy is different in terms of how it affects you, especially with this Brazilian variant. For younger people to get this sick, it’s scary.”

Symptomatic players, however, have a different protocol to follow. They’re required to isolate for 10 days after the symptoms first appear, as well as obviously have their symptoms clear and experience at least 24 hours without a fever, as well as clearance from the team doctor and infectious disease experts, likely from Vancouver Coastal Health.

That means symptomatic players like Gaudette and Sutter could potentially be out a little longer. When they return will depend on what course their symptoms take.

Assuming the Canucks return to play on Monday, April 12, who could be in the lineup?

The Canucks currently have six players on their active roster who have not tested positive: Brock Boeser, J.T. Miller, Jake Virtanen, Jimmy Vesey, Nate Schmidt, and Jordie Benn. They’re unlikely to get much help from injured players — Tanner Pearson is expected to be out for at least another week, Jay Beagle’s injury could keep him out through the end of the season, and there’s still no word when Elias Pettersson might return.

The taxi squad has seven players on it, though two reportedly have tested positive for COVID-19. The two players have not been named. The Canucks should have five of the following available: Loui Eriksson, Kole Lind, Olli Juolevi, Michael DiPietro, Ashton Sautner, Brogan Rafferty, and Tyler Graovac.

The Canucks have also recalled goaltender Arturs Silovs and defenceman Guillaume Brisebois, both of whom were assigned to AHL teams within Canada, so don’t require as long a quarantine as players recalled from the team’s AHL affiliate, the Utica Comets. Both should be available by April 12.

Assuming there are no further positive test results, that gives the Canucks 13 players available for a potential April 12 game, plus any players who tested positive for COVID-19 on Wednesday or Thursday last week, as long as they didn’t develop symptoms during isolation.

Even if all six players remained asymptomatic during isolation, that’s still only 19 players available for the Canucks, one short of the typical lineup, and three of those players are goaltenders. If any of those players developed symptoms in isolation and must quarantine longer, the Canucks could be even more shorthanded.

Best case scenario, here's what the Canucks lineup would potentially look like, with two players removed from the taxi squad. I picked Juolevi and Graovac as those were the two members of the taxi squad on the ice for Wednesday's morning skate:

That's not the most promising lineup — it only features three forward lines, with only one natural centre and a defenceman playing out of position — and that's if all the players that went on the COVID-19 list on Wednesday and Thursday can return.

It’s not unheard of for teams to dress fewer than 20 players in a game. Back in 2010, injuries and suspensions forced the New Jersey Devils to dress just 15 skaters and two goaltenders in a game against the Pittsburgh Penguins. Unsurprisingly, the Devils lost.

DiPietro's 2nd NHL start could be more bizarre than his 1st

If Holtby isn’t ready to return, it could mean the first action for Michael DiPietro all season and his first NHL start since February 2019, when he was forced into action well before he was ready. These would be extremely difficult circumstances for DiPietro to get his second career start and he’d be backed up by the even-less-tested Arturs Silovs, who has played just one game in the AHL this season, the only AHL game of his career.

The Canucks don’t appear to have recalled any players from the Utica Comets, who have been dealing with their own COVID-19 outbreak in the AHL, with 9 games postponed. After an exposure in a game against the Rochester Americans, the Comets took a conservative approach, immediately isolating for a week even though they were not required to do so. That likely helped the team escape the outbreak with only two positive COVID-19 tests.

Then there’s the question of coaches. Three members of the coaching staff have reportedly tested positive for COVID-19. With how closely the coaching staff work together, the other coaches would surely be considered high-risk close contacts, requiring 10 days of self-isolation.

That would fit with the timeline that sees the team return to action on Sunday: that would be 10 days of isolation after Wednesday’s ill-fated morning skate. If any of the coaches with a positive test developed symptoms in isolation, they may need to quarantine longer, so the Canucks could potentially be short-staffed behind the bench for a few games.

Assuming the Canucks — even if only a depleted version of them — can return to action on April 12, that will still leave six games for the team to make up at a later date: three against the Calgary Flames, two against the Winnipeg Jets, and one against the Edmonton Oilers.

The team’s remaining schedule is tightly packed, with not even a three-day break between games. There are also just two days between the Canucks’ final game on the schedule and May 11, which was the scheduled start date for the playoffs.

The NHL has already scheduled one postponed game for May 11, however, and they have room to push back the start of the playoffs if necessary.

It’s difficult to see where the Canucks could make those six games fit in their schedule otherwise. They could play their postponed game against the Oilers on Thursday, April 15 — they’ll already be in Edmonton, who also have a two-day break at that time — but their games against the Jets and Flames don’t have an easy spot in the schedule.

That would force the Canucks to play five games after May 8: perhaps back-to-back games against the Jets on May 10 and 11, then three games in four nights against the Flames from May 13 to 16.

As a result, the Canucks’ COVID-19 outbreak could push back the start of the NHL playoffs by at least a week for the North Division. And that’s a best-case scenario that assumes the Canucks don’t have any further positive cases that force the league to postpone more games.

But that may be the only option to complete the full schedule of games, barring a more radical rescheduling — pushing relatively meaningless games against the Ottawa Senators to the end of the schedule, for instance, then shuffling every other team's games around to fit them in.