Vasily Podkolzin and other Canucks prospects kick off camp on Thursday

The lads have returned to the municipality.

It turns out it’s really difficult to avoid saying “The boy are back in town” as players report to NHL camps around the league. Blame Thin Lizzy for making the phrase so relentlessly catchy.

After a summer that was a little longer than the Vancouver Canucks would have liked, the start of the 2021-22 season is right around the corner. Just one month from now, the Canucks will play their first game of the season on October 13. Two weeks from now, the Canucks will open the preseason in Spokane, WA against the Seattle Kraken on September 26. Canucks training camp will kick off next week in Abbotsford on September 23.

And the first sign that the season is coming is this week: the Canucks’ rookie camp starts with medical and fitness testing on Thursday, September 16 and on-ice sessions on Friday, September 17.

Joining those two will be six other forwards, three defencemen, and one goaltender. 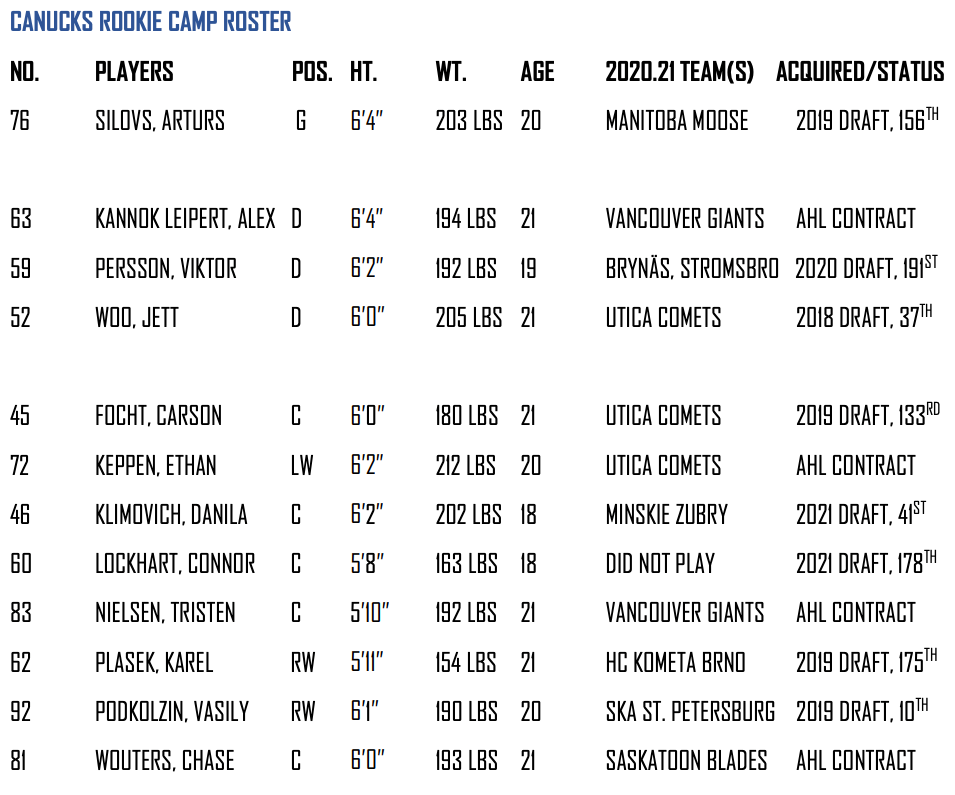 That goaltender is Arturs Silovs, who is expected to back up Michael DiPietro in the AHL with the Abbotsford Canucks. The Latvian might also be called upon to represent his country at the 2022 Olympics in Beijing, albeit as a second or third-string goaltender.

On defence, the top prospect to watch is Jett Woo, who represents the team’s best hope on the right side. He’s likely to play a big role in Abbotsford in the coming season.

Viktor Persson is also an intriguing prospect, one that some in the Canucks organization are quite high on. The seventh-round pick from 2020 is coming to North America to play in B.C. but not for either the NHL or AHL Canucks. Instead, he’ll adapt to the smaller rink with the Kamloops Blazers in the WHL.

The final defenceman is Alex Kannok-Leipert, who was drafted by the Washington Capitals in 2018 but went unsigned, allowing the Abbotsford Canucks to sign him to an AHL deal. Vancouver hockey fans will know Kannok-Leipert from spending the last four seasons with the WHL’s Vancouver Giants, where he was team captain for the last two seasons.

While Vasily Podkolzin is the star attraction among the forwards at rookie camp, there are several other intriguing faces.

Carson Focht will look to work his way up the lineup with the Abbotsford Canucks with hopes of earning a bottom-six spot in Vancouver. The Canucks believe in his two-way game but he’ll need to prove himself in Abbotsford.

Likewise, Ethan Keppen will look to prove that he deserves more than an AHL contract. The Canucks chose not to sign the former draft pick to an NHL deal but he signed in Abbotsford after spending some time with the Utica Comets last season.

Danila Klimovich is the most intriguing prospect at camp. The big Belarusian has all kinds of talent and drive, but is raw and unrefined. There’s a chance he could play for the Abbotsford Canucks in the AHL and be available as a call up to the NHL but it’s more likely he gets sent to the QMJHL to refine and grow his game.

After Klimovich, Connor Lockhart carries the most intrigue. He didn’t play at all in his draft year as the OHL cancelled their season and Lockhart had the potential to be picked a lot higher than the sixth round, where the Canucks selected him. Back in the OHL with the Erie Otters this season, Lockhart has the skill level and hockey IQ to dominate.

Karel Plasek is interesting primarily because the Canucks saw enough in him to sign him to a contract. Plasek’s numbers don’t jump out from his time in the Czech league but he has great wheels and a strong work ethic — he could be a surprise with the Abbotsford Canucks this season.

Then there are two more players signed to AHL contracts: Tristen Nielsen and Chase Wouters.

Nielsen was a star for the Giants last season, racking up 15 goals and 32 points in just 22 games. That was enough to finish eighth in WHL scoring but not enough to earn an NHL contract. He’s got the speed and shot to make some noise with the Abbotsford Canucks.

Finally, there’s Wouters, who has been captain of the WHL’s Saskatoon Blades for the past three seasons. He was the first signing by the Abbotsford Canucks and could take a leadership role with his lead-by-example approach on the ice. He was third on the Blades with 22 points in 21 games but is also a natural centre and penalty killer, which should give him plenty of ice time in Abbotsford.

Wouters has even had his number 44 retired by the Blades.

While the rookie camp is not expected to be open to the public, media will be allowed in Rogers Arena to cover the on-ice sessions, so Canucks fans can expect to get overly hyped about Podkolzin performing practice drills on Friday.

Can the Vancouver Canucks’ proximity to the Abbotsford Canucks provide a competitive advantage?
Aug 25, 2021 6:19 PM