Can the Vancouver Canucks’ proximity to the Abbotsford Canucks provide a competitive advantage?

The Canucks were the furthest away from their AHL affiliate; now they're among the closest.

When the Vancouver Canucks moved their AHL affiliate from Utica to Abbotsford, one of the big selling points was having the Canucks’ prospects and AHL depth in closer proximity to Vancouver.

Canucks’ management, including Daniel and Henrik Sedin, have talked about being able to more readily see prospects play in person. Abbotsford general manager Ryan Johnson said that it’s a selling point for free agents, as they know they’re just down the road from Vancouver and could more easily get an NHL opportunity. Most importantly, it’s a lot easier to get a player up to the NHL in case of injury.

We might have been underselling just how big a difference it could make, particularly for an AHL call-up.

"The hockey bag is always the last one off the plane."

Getting that call as an AHL player is exciting but it also immediately leads to complications: how do I get there?

New Canuck Jason Dickinson is very familiar with the AHL-to-NHL grind. When he played in the Dallas Stars organization, he frequently had to make the trek from Cedar Park, where the Texas Stars play just outside Austin, to Dallas and vice versa. That’s a short flight, but he typically chose to make the nearly four-hour drive in his truck instead.

It also meant he had his own wheels while he was in Dallas.

“It sucks when you're stuck in your city and you have to beg guys to pick you up at the hotel,” said Dickinson. “It makes it easy to feel a part of the area. You don't feel like you're coming into a whole new city and trying to figure things out.”

Dickinson doesn’t have to worry about bouncing between the AHL and NHL anymore but the Canucks have several players who are likely to spend time in both leagues in the coming season. When they get the call, they won’t be driving as far as Dickinson did.

Canucks were the furthest from their AHL affiliate

I looked at all 32 NHL teams and their AHL affiliates to see just how close or how far each of them is. It’s not just that the Canucks’ AHL affiliate will be closer to Vancouver — it will go from the furthest distance between affiliates to one of the top ten closest.

Imagine the following scenario: an NHL team conducts their morning skate at their home arena on a game day, only to have multiple players get injured. It’s an emergency scenario and the NHL team needs to get a player up from the AHL as quickly as possible.

The player in question is just finishing up after a practice or morning skate at his AHL arena and needs to pack up his gear and hit the road. If he leaves at 1:00 PM from his AHL arena, can he get to the NHL arena in time for a 7:00 PM game?

I plugged in the arenas of each NHL and AHL team into Google Maps to find distances, driving times, and flying times. When a range of times was provided, I always went with the longer time, because let’s be honest — traffic is always at its worst when you need to get somewhere in a hurry.

Flying times are for commercial flights and don’t include the added time of getting to and from the airport. Teams could charter a private jet, of course, and have a faster flight, but AHL call-ups typically fly commercial.

Speaking of flights, I also noted how close each AHL affiliate is to the closest international airport.

Let’s look at the results in one big chart, sorted by distance between affiliates as the crow flies. I’ve highlighted the Canucks’ proximity to Abbotsford and Utica. 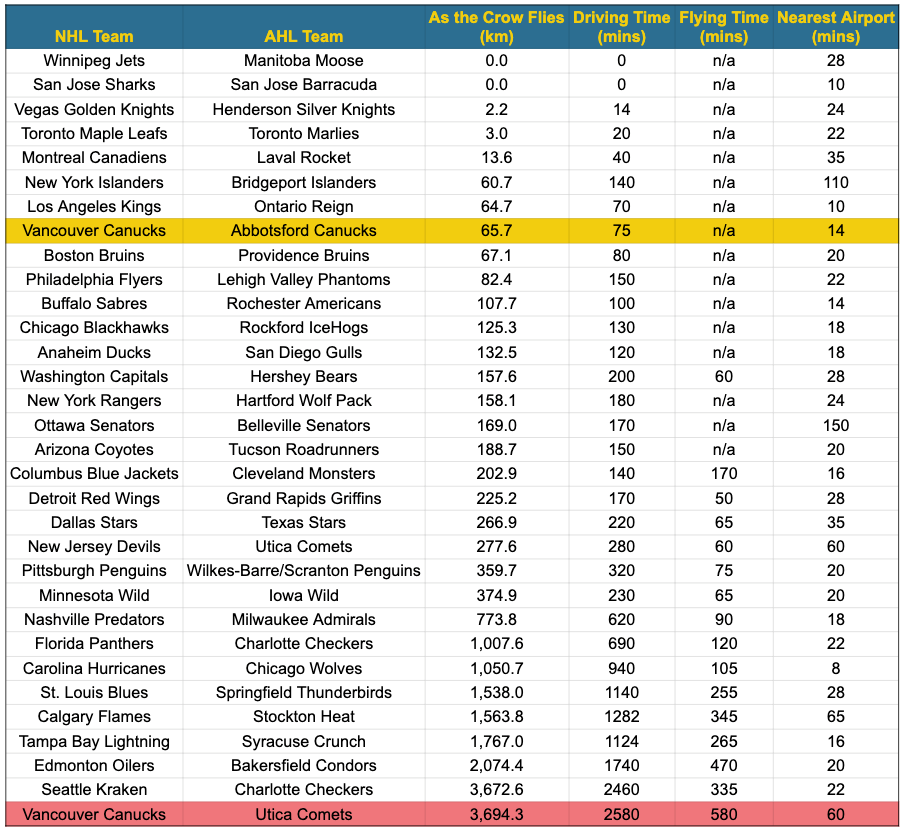 Distance between NHL teams and their AHL affiliates.

If a call-up from the AHL started driving from Utica at 1:00 PM and drove non-stop, they would arrive in Vancouver 43 hours later — in other words, two days later at 5:00 AM local time. Just a little late for that 7:00 PM game two days ago.

Of course, call-ups didn’t drive, they flew. But Utica doesn’t have an international airport and the closest one — Syracuse Hancock International Airport — doesn’t offer direct flights to Vancouver. Google Maps estimates a 9 hour and 40 minute flight from Syracuse to Vancouver, which is likely underestimating how long the flight would actually be by at least an hour. Add an hour drive from Utica to the airport and you’re looking at arriving in Vancouver, at best, by 9:00 PM local time.

The only way to get an AHL call-up from Utica to Vancouver by game time would be chartering a private jet. Even that would be cutting it close, as a direct flight would take over five hours. With the time difference and some favourable traffic, maybe the call-up could get to Rogers Arena by 5:30 PM. Maybe.

Compare that to the Abbotsford Canucks. An AHL call-up just has to get in their car, get on Highway 1, and drive to Vancouver. In the early afternoon, traffic shouldn’t be too bad, so he could expect to get to Rogers Arena in a little over an hour — Google Maps suggests 75 minutes. He’s at the rink by 2:15 PM, with time to grab a quick nap before pre-game meetings.

Even if a call-up from Abbotsford needs to join the team on the road, he’ll have an easier time doing so. Abbotsford has the fourth-shortest drive to the airport among AHL affiliates, with the option of driving a little over an hour to YVR if they offer a shorter flight.

Several Pacific Division rivals are even closer to their affiliates

The ability to call up a player and have them available to play the same day should not be overlooked. It’s not a luxury that every team has and it’s one that can also allow the Canucks to more carefully manipulate the salary cap. Several teams around the NHL will frequently shuttle players between the AHL and NHL because cap hits are calculated on a daily basis and even a few days here and there can make a difference.

Looking at the Canucks’ Pacific Division rivals, it’s fascinating to see just how different their AHL situations are.

Three other teams in the Pacific Division are also among the top ten closest AHL affiliates. The San Jose Sharks, like the Winnipeg Jets, cheat the system by sharing their home arena with their respective AHL affiliates, the San Jose Barracuda and Manitoba Moose. The Barracuda, however, will be moving to a new arena soon, but it’s still a mere 12-minute drive away.

The Henderson Silver Knights play a mere 2.2 kms away from the Vegas Golden Knights in Paradise, Nevada. They will also be moving soon to a new arena actually in Henderson, only 22 minutes away.

The Ontario Reign are almost exactly as far from the Los Angeles Kings as the Abbotsford Canucks are from the Vancouver Canucks. The Anaheim Ducks fall out of the top ten but are not much further from their AHL affiliate, the San Diego Gulls — just a two-hour drive.

Edmonton, Calgary, and Seattle are miles away from AHL call-ups

Then there’s the rest of the Pacific: the Calgary Flames, Edmonton Oilers, and Seattle Kraken. They are three of the four furthest teams from their AHL affiliate.

It’s hard to say who has it the worst, but it’s probably the Oilers. Their affiliate, the Bakersfield Condors, is over 2,000 kms away — just a short 29-hour drive. The real issue is flying, as there are no direct flights to Edmonton from Meadow Fields Airport in Bakersfield.

Google Maps estimates a nearly 8-hour flight with multiple layovers. It’s easily the longest flight on the list with the flight from Utica to Vancouver removed. Even driving to another airport is no solution: LAX is a 2-hour drive and it would still be nearly a 6-hour flight, so no time saved.

In other words, if the Oilers need to get a call up to Edmonton in an emergency, it’s a charter jet or bust.

It’s not much better for the Flames. A call-up from the Stockton Heat has to drive over an hour to the Sacramento International Airport, then take a 5 hour, 45 minute flight to Calgary. He could instead take a 2-hour drive to San Francisco for a shorter 3-hour flight, but it’s still unlikely he’s arriving by game time.

Then there’s the Kraken, who take over the Canucks’ title as the team furthest from their AHL affiliate. They’re sharing affiliates with the Florida Panthers in the coming season — considering how far apart the Kraken and Panthers are, that should tell you something.

The teams will share the Charlotte Checkers, who are 3,672.6 kms from Seattle. That’s a mere 41-hour drive.

The one benefit for the Kraken, particularly compared to the Alberta teams, is that it’s a short jaunt to Charlotte Douglas International Airport, which, most importantly, provides direct, non-stop flights to Seattle. Despite that 5 hour, 35 minute flight time, with the time difference, an AHL call-up could leave Charlotte at 1:00 PM and be at Climate Pledge Arena by around 4:30 PM.

Does having their affiliate in Abbotsford give the Canucks a competitive advantage over the Oilers, Flames, and Kraken? Maybe. A call-up from Abbotsford should be well-rested and ready to go by game time in Vancouver rather than exhausted from a long flight across the States or not even there yet.

Of course, we’re talking about AHL call-ups who might play ten minutes on the fourth line. The competitive advantage, if it exists, is a small one.

Other NHL/AHL travel odds and ends

There are some other fun oddities on this list, however. One of my favourite results is the Islanders, both in New York and Bridgeport. The two arenas are just 60.7 km apart — closer than Vancouver and Abbotsford — but it’s a 2 hour, 20 minute drive. That’s what happens when you have to drive all around Long Island Sound through New York to get to the NHL.

I also enjoy how it takes longer to fly from Cleveland to Columbus for a Blue Jackets call-up than it does to drive. There are no direct flights, so you just need to make a quick layover in Washington, Atlanta, or Chicago.

Call-ups from the Utica Comets will still have some tough travel, even if they’re now affiliated with the New Jersey Devils instead of the Canucks. It’s still a one-hour drive to Syracuse and a one-hour flight, with all of the complications of flying. It’s enough to make you want to drive the whole way, but that’s a 4 hour, 40 minute drive from Utica to New Jersey.

If anyone is overly concerned about the distance between a team and their affiliate, they shouldn’t be. Just look at the Tampa Bay Lightning and Syracuse Crunch: they’re 1,767 kms apart, separated by a 4 hour, 25-minute flight. They’ve done all right for themselves, winning back-to-back Stanley Cups.

Abbotsford Canucks GM Ryan Johnson is excited to be reunited with the Sedins
Jul 14, 2021 5:08 PM

Despite the noise, Canucks and provincial vaccine requirement is a popular policy
Aug 24, 2021 1:52 PM