Will the Canucks make the playoffs? Opinions are split among pundits and analytics

NHL experts have the Canucks at a coin flip to make the playoffs, finishing anywhere from 1st to 6th in the North Division.

With a shortened season, mixed-up divisions, and the ever-present possibility that a team could have a star player out of the lineup for two weeks or more due to the NHL’s COVID-19 protocol, it seems impossible to predict what might happen in the 2020-21 season.

Unsurprisingly, that hasn’t stopped experts, pundits, and analysts from around the league from weighing in with their predictions, educated guesses, and fine-tuned analytical models.

Canucks fans, at least, are confident in their team. A poll from TSN1040 saw 75.1% of responders say the Canucks will make the playoffs in the newly-created all-Canadian North Division.

The Canucks themselves are confident as well.

“We believe that we can be the top team in the division,” said Jake Virtanen after Wednesday’s game day skate. “Our goal is to win a Cup. Every team says that, but we believe in our room that we have a great team and we can become a really big powerhouse in this division.”

The experts aren’t quite so confident. There’s little consensus over how the Canucks will perform. Some pundits have them as high as first in the division, while others see them finishing as low as sixth, better than only the Ottawa Senators.

When asked if it pisses him off to have experts predict a finish outside of the playoffs, Canucks captain Bo Horvat didn’t mince words.

“Yeah. I mean, it does,” said Horvat. “It fuels my fire, for sure, when you see things like that or hear it. I think it should just motivate us to be better and prove people wrong again. We know we have a great hockey team in here.”

Others in the Canucks room pay less attention to what is said around the NHL.

“I don’t think anything of it. None of that really matters, we don’t really pay attention to it,” said Virtanen. “We just focus on what we have to do in our room. It doesn’t really matter what anyone else thinks, we want to keep that out of our locker room.”

Whether it becomes bulletin board material or is just noise, let’s take a look at some of the predictions from around the NHL. 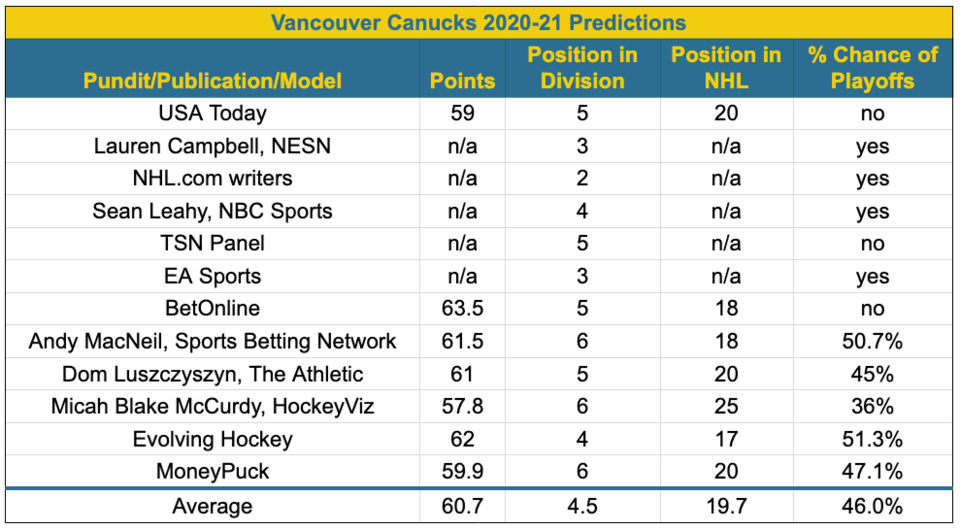 We’ll start with USA Today, which doesn’t shy away from specific win-loss records in their predictions. They see the Canucks finishing with a 27-24-5 record and 59 points, 10 points behind the division-winning Toronto Maple Leafs. That puts them in fifth place behind the Edmonton Oilers for the final playoff spot.

In their blurbs below the predictions, the main sticking point appears to be the departure of Jacob Markstrom, suggesting that either Braden Holtby will need to have a bounceback season or Thatcher Demko’s dominance in his brief playoff appearance was a harbinger of things to come.

Lauren Campbell from New England Sports Network is a little higher on the Canucks, confident that Demko and Holtby can fill the void in net. She likes the talent level of the Canucks and predicts a third-place finish in the North. Notably, her prediction was made before the signing of Travis Hamonic.

In the chart above, I’ve simply put the average of the predictions for all of the NHL.com writers, as it was impractical to list the predictions of all 15 writers. Ultimately, just one writer, Mike G. Morreale, had the Canucks outside of the playoffs in the North Division, while four writers — Shawn P. Roarke, Tracey Myers, Tom Gulitti, Brian Compton — actually picked the Canucks to win the division.

Similarly, the projections from NBC Sports are that of Sean Leahy, which also happens to be the average of their six writers. Unlike the NHL.com predictions, however, the opinions are far more split. Half of their six writers have the Canucks out of the playoffs, half have them in, with managing editor Jake Abrahams suggesting they’ll finish second.

Call it a coin flip, then, from NBC Sports. The issue preventing a higher ranking is goaltending for most of the NBC pundits.

TSN’s television panel of Darren Dreger, Craig Button, Dave Poulin, and Jeff O’Neill are not high on the Canucks. Dreger, Button, and Poulin have the Canucks out of the playoffs, though O’Neill suggests they’ll finish third. The average placement for the quartet in the chart above is 5th.

EA Sports ran their simulation of the season using NHL 21 and had the Canucks land in third place in the North. They also suggest Elias Pettersson will score 31 goals and 75 points in just 56 games and that Quinn Hughes will win the Norris Trophy as the league’s best defenceman.

Depending on how highly you view the realism of the NHL games, that may colour how you view that particular prediction.

Canucks playoff chances from the oddsmakers and analytical models

Now we get into the more analytically-inclined predictions.

The oddsmakers at BetOnline have the Canucks over/under for points set at 63.5, the highest among the predictions that projected points for the season. Unfortunately, it’s not quite enough to get the Canucks in the playoffs in their books: they have the Leafs, then Edmonton Oilers, Montreal Canadiens, and Calgary Flames making the playoffs out of the North.

Sports betting expert Andy MacNeil has the Canucks slightly worse at 61.5 points and 6th in the division, but still has their playoff odds at 50.7%. That’s a sign of how close the middle teams in the North Division are expected to be that even a sixth-place projection is still a coin flip to make the playoffs.

Analytics writer Dom Luszczyszyn at the Athletic similarly has the Canucks at a near coin flip to make the playoffs, landing at 45%. They’re projected 61 points have them in 5th in the division.

His Canucks preview goes into a lot more detail. He has their core talent — Elias Pettersson, Quinn Hughes, J.T. Miller, Brock Boeser, Bo Horvat, and Nate Schmidt — rated as among the best in the league, but they’re badly dragged down by the subpar talent in the bottom six, underwhelming depth on defence, and uncertainty in net.

“Vancouver’s success this season likely won’t depend on its star players. They are good enough to contend. It’ll depend on its supporting cast not holding it back,” concludes Luszczyszyn.

The biggest issues for the Canucks according to McCurdy’s model: 5-on-5 defence and goaltending. That’s not a great combination of weaknesses.

Evolving Hockey’s model is a little bit friendlier to the Canucks, projecting a fourth-place finish in the North Division. That makes theirs the only model that sees the Canucks in the playoffs, but it’s only by a hair with 62 points and a 51.3% chance with the Winnipeg Jets and Edmonton Oilers not far behind.

Finally, there’s MoneyPuck, whose model has the Canucks with the sixth-best odds of making the playoffs out of the North with a projected 59.9 points. Again, despite the low position in the North Division, their playoff odds are a near coin flip at 47.1%.

When looking at the predictions as a whole, it seems appropriate that the average position in the North Division lands at 4.5: halfway between fourth and fifth. That’s fitting for a team that is predicted to have close to a 50% chance of making the playoffs.

The Canucks will be teetering on the edge of the playoff bubble by the end of the season according to these predictions. Which side will they land on?