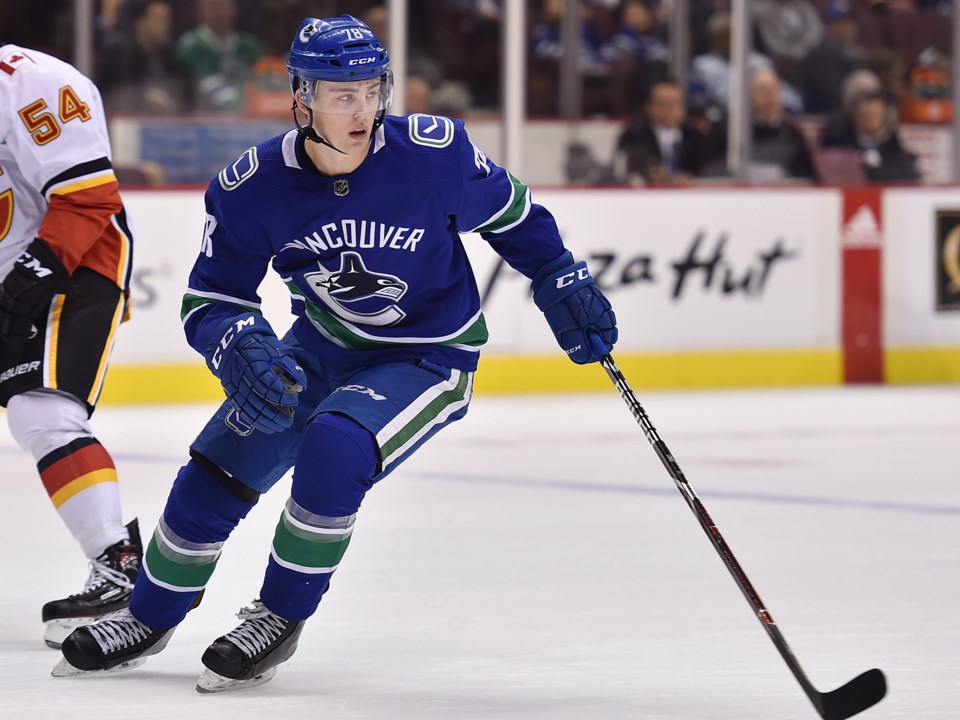 Four years after being drafted in the second round, Kole Lind will make his Vancouver Canucks debut. photo: Dan Toulgoet / Glacier Media

“If I think they can help us win, they’re going in.”

That was Travis Green after Wednesday’s loss to the Ottawa Senators when he was asked about the possibility of getting younger players into the lineup, like Kole Lind and Jack Rathbone.

Green has been very clear that he’s not giving up on the Canucks season, no matter how long their odds to make the playoffs have become. When asked earlier in the week about inserting someone like Lind in the lineup, Green pushed back hard on the idea that he’d play a prospect just to get a look at him.

“You’re insinuating that we’re going to play guys and not care about winning or we’re out of contention,” said Green. “I’m not saying I’m not going to put a young guy in the lineup if he’s going to help us win.”

So, when Green said ahead of Thursday’s match-up against the Toronto Maple Leafs that Lind would be making his NHL debut, it was obvious that one thing was on his mind: winning.

“Make no bones about it, I’m not putting Kole Lind in just so he can get a game under his belt,” he said. “I’m putting him in because I feel like he can help us win. When you look at the standings, we’re two games under .500, Montreal’s three games over .500, and that can change fast. This is not about Kole Lind getting a free game. He’s going in because I’m hoping he can help us win, hoping he can give us a shot of energy.”

"He’s got nice hands, he’s been creative in practice, he’s got a good shot."

Energy is certainly needed. The Canucks looked fatigued Wednesday against the Senators and getting fresh legs in the lineup certainly couldn’t hurt. Lind hasn’t played a game since March 3 with the Utica Comets because of a broken nose and also managed to evade both the Comets’ and the Canucks’ COVID-19 outbreaks, so fatigue shouldn’t be a factor.

Lind brings more to the table, of course, than a lack of fatigue. Lind has shown impressive improvement and development over the last few seasons in the AHL. Last season, he had 44 points in 61 games, a big step up from his 17-point rookie season.

This season, he was even better. He had 5 goals and 8 points in 8 games before his broken nose took him out of the lineup.

“He looks, to me, a little more confident than the last time I saw him,” said Green. “He’s got nice hands, he’s been creative in practice, he’s got a good shot. It’s no secret that we’ve been struggling to score, struggling to create, but I’ve also got to find the right spot for him, knowing that it’s his first game in the NHL and seeing how he looks from the start of the game and working him in accordingly.”

"He was a force on the power play."

What might be most impressive is that Lind had his hot start with the Comets while playing in an unfamiliar position. With limited centre depth, Lind was asked to move from his natural right wing to centre the top line.

Cody Severtson, whose in-depth Utica Comets game reviews are a must-read for those looking for a deep-dive into the Canucks prospect pool, praised Lind for the improvements to his two-way game required by his new position.

“Relative to last season, I thought he was much more engaged in the defensive side, even if his reads and coverage were a bit clunky,” said Severtson. “He wasn't coasting on his edges as much, he was making a concerted effort to be first man back, playing high in the offensive zone, and trying to be in that ‘rover’ position ready for the backcheck. He wasn't the prettiest two-way player, but I commend him for embracing the 1st-line centre role in such a bizarre season.”

Severtson did note that Lind had a tough time matching up against first lines in the AHL at 5-on-5 but that has been an issue for the Comets all season. On the wing, where he’s more likely to play in the NHL, he should have an easier time and his experience making defensive reads while playing as a centre should help his overall game.

While Lind made improvements in his defensive game, his offence flourished with the man advantage.

“He was a force on the powerplay in that bumper, half-wall spot as a one-timer option,” said Severtson. “He should get PP2 time. If [Travis] Boyd can get time on the wall, then surely Lind can too. Put him in a position to succeed by having him be a one-timer option in the circle. His shot from down low is sneaky good, and the Canucks second powerplay unit doesn't have a great one-timer option outside of [Tyler] Myers.”

Lind also has a unique element to his game: he loves to get under the skin of his opponents.

“Loved his agitator game. Easily one of the most unique identifiers of what he brings to the table,” said Severtson. “Any trio he was a part of last season immediately became a pest-line by virtue of Lind setting up scoring opportunities, crashing the net, and face washing whoever was in his vicinity. A young agitator coming into the Canucks forward group would be a breath of fresh air.”

"His first few strides leave a lot to be desired."

Of course, it’s important to keep expectations in check when it comes to young players, particularly ones who are playing their first career NHL game. While Lind has plenty of strengths, he also has some clear limitations.

“Skating, skating, skating,” said Severtson. “His first few strides leave a lot to be desired...He can keep up, but that initial burst of agility comes off a bit clunkier than it should. His game thrives on being paired with a shooter, or someone with speed.”

While Lind’s skating didn’t hold him back from putting up points in the AHL, the NHL game is much faster, with that first step vitally important for keeping up with checks defensively or getting that extra bit of space needed to make a play offensively.

On Wednesday, Green emphasized the need to put young players in a position to succeed when they enter the lineup. With some of the team’s top young players, like Elias Pettersson and Quinn Hughes, he’s shown a willingness to immediately hand them tough minutes, while more slowly getting other young players into the game with limited minutes at first.

With that in mind, it’s hard to say how Green will use Lind. He could put him on the third or fourth line in place of one of the bottom-six forwards that struggled last game like Jayce Hawryluk or Matthew Highmore. With his comments about Linds’ hands and creativity, however, maybe he’ll give him a top-six shot.

J.T. Miller and Brock Boeser don’t really have a third member of their line at the moment. Jimmy Vesey was playing with them but has been scratched multiple times. Tyler Motte skated on their line on Wednesday but that’s not a role that plays to his strengths. Perhaps Lind could get a shot with Miller and Boeser.

Lind does have a playmaking bent to his game, something that Miller and Boeser could really use. At this point, what do the Canucks have to lose?

IWTG: Canucks fall to last place in the North Division for the first time this season after loss to the Senators
Apr 28, 2021 9:20 PM