Where do the Canucks stand after the first day of free agency? 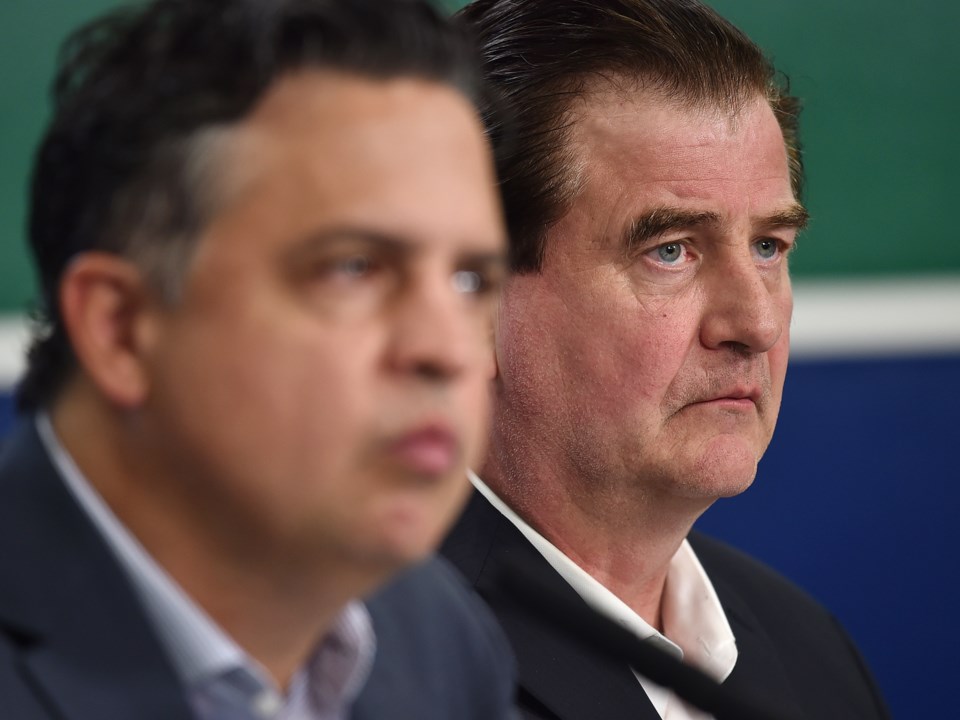 It's been an incredibly busy week for Jim Benning and the Vancouver Canucks.

There was the draft on Tuesday and Wednesday. Wednesday also coincided with the deadline for giving restricted free agents a qualifying offer. Throughout the week, Benning was trying to sign deals with pending free agents like Jacob Markstrom, while also negotiating a potential trade for Oliver Ekman-Larsson with the Arizona Coyotes.

Finally, to top it off, Friday was the first day of free agency, or the Free Agent Frenzy as it's colloquially known.

Was it a successful week for Benning? It depends on how you define success.

If you define success as accomplishing exactly what you set out to do, this week was an abject failure. The Canucks didn't get any of their big three unrestricted free agents signed. Jacob Markstrom signed with the Calgary Flames, while Tyler Toffoli and Chris Tanev are hearing offers on the free agent market. They didn't complete the trade for Ekman-Larsson. They didn't shed any salary from their bloated bottom-six, whether through buyouts or trades. Their biggest restricted free agent, Jake Virtanen, will file for salary arbitration and could get a significant payday.

The draft, at least, went well.

On the other hand, some of the moves they didn't make were for the best.

Paying too much for Ekman-Larsson just wasn't worth it — if the Coyotes didn't want to accept a pick, a second-tier prospect, and eating a bad contract, so be it.

Markstrom got a 6-year, $6 million contract with the Flames, complete with a no-movement clause that will protect him from the Seattle Kraken expansion draft. That's not a deal the Canucks could afford to make, especially if they truly believe Thatcher Demko is the future.

Not buying out any contracts will hurt short-term, but it will prevent dead money on the books in future years when they need to re-sign Elias Pettersson, Quinn Hughes, and Demko.

In free agency, they didn't overspend on day one and got one of the biggest names on the goaltending market in Braden Holtby.

Those are all wins, of a sort. At the very least, Benning avoided moves that would have hurt the team long-term. The real question is whether the Canucks will be any better next season. To answer that, let's look at the current depth chart and cap situation to see where the Canucks stand and what they still need heading into next season. 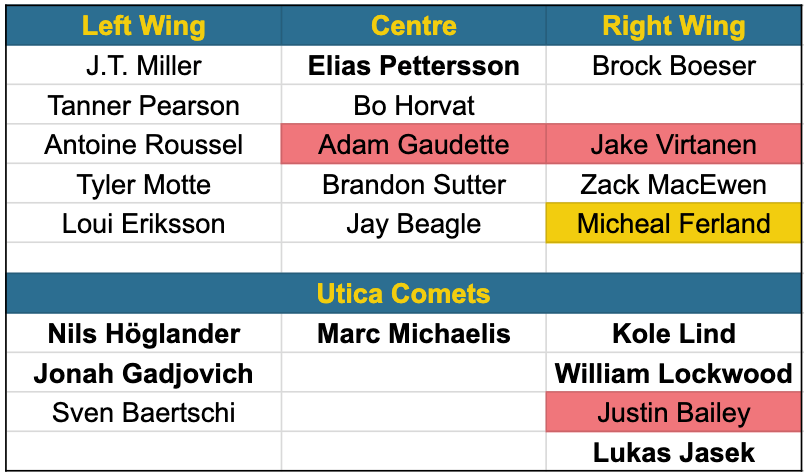 With the departure of Tyler Toffoli and the uncertain future of Micheal Ferland, the Canucks' clearest need at forward is for another top-six winger.

Adam Gaudette, Jake Virtanen, and Justin Bailey are restricted free agents in need of new contracts, with Virtanen likely looking to arbitration, where he has a solid case for a significant raise thanks to his 18 goals last season. One path the Canucks could have taken was to let Virtanen go and focus on re-signing Toffoli, but Virtanen does have youth on his side.

"Virtanen is a player that we've drafted, we've developed, we've spent a lot of time with," said Benning. "He scored 18 goals in 68 games for us last year. He's still only 23 years old, we think he's going to be a consistent, 20 goal-scorer for us moving forward."

That might be optimistic, but if Virtanen can take a big step forward next season, not just in becoming a 20-goal player but also a more complete player, perhaps he can fill that top-six winger role. Otherwise, the Canucks need to look to free agency or hope that Nils Höglander or Kole Lind can surprise in training camp and make the team.

A wild card option: the return of Sven Baertschi.

"Sven will come to training camp and we'll see where he's at and where he fits," said Benning. "If he deserves to be on the team, he'll be on the team, and if not then he'll be depth for us and we'll call him up and he'll play games for us. That'll be up to Sven, how he comes in and performs at camp."

Seems unlikely, by wilder things have happened. If the Canucks can't find another top-six forward, they might have to turn to Baertschi. 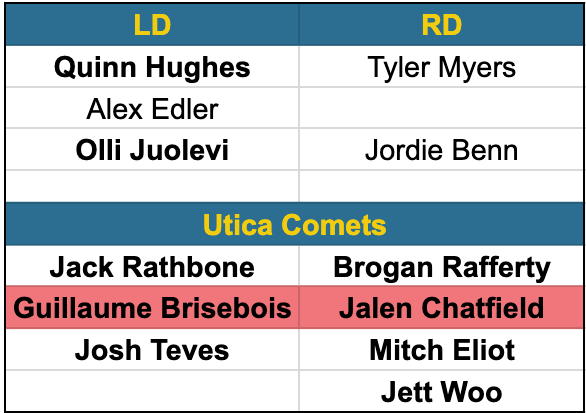 Canucks defensive depth as of October 9, 2020

Bold names, incidentally, mean players that are waiver-exempt, so can be called up and sent down at will.

Just as with the forward depth, there is one big, glaring need on defence. Unlike at forward, there are a couple other, slightly-less glaring needs.

With both Chris Tanev and Troy Stecher hitting free agency, the Canucks have a massive hole to fill on the right side of their defence. They need a first or second-pairing defenceman and they don't have anyone in-house that can fill that gap. The trouble is they don't have much room in the budget to pay for a top-four defenceman and the available options are mostly too expensive or unpalatable, sometimes both.

The Canucks have been rumoured to be interested in Tyson Barrie, but he'll likely be too expensive as a defenceman that has topped 50 points multiple times in his career, and he's also a disaster defensively. Alex Pietrangelo is going to get paid far too much money. Cody Ceci is just plain bad.

(Ed. note: since publication, Tanev is off the market. The Calgary Flames signed him to a four-year deal worth $4.5 million per year)

One option, of course, is simply re-signing Tanev.

"We're still talking to Chris," said Benning. "If the numbers make sense and the term makes sense, we'd love to have him back. So he's going to sleep on it tonight, we should have an answer hopefully on that tomorrow morning."

Even if the Canucks arre able to find another top-four, right-side defenceman without breaking the bank, they still have some work to do. I have Olli Juolevi stepping up to play in the NHL and that's no guarantee. On the right side on the third pairing, I have Jordie Benn, who had a terrible year last season and Travis Green feels more comfortable playing on the left.

So really, the Canucks don't have a third pairing. Given their cap constraints, they might just have to create one from within.

Jack Rathbone and Brogan Rafferty both have NHL potential. Guillaume Brisebois and Jalen Chatfield are both restricted free agents who need new contracts, but the Canucks are high on both of them. Perhaps between those four defencemen, Juolevi, and Benn, the Canucks can create a credible third pairing. 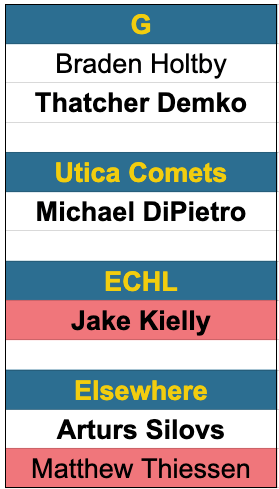 Canucks goaltending depth as of October 9, 2020

One area where the Canucks are sure of where they stand is in net. They signed Braden Holtby to a two-year, $8.6 million contract to replace Jacob Markstrom. He'll join Thatcher Demko to form a goaltending tandem that the Canucks hope will carry them back to the playoffs next season.

There are some causes for concern. Holtby had an .897 save percentage last season, while Demko was also below average at .905. The Canucks believe in Demko, particularly after his spectacular performance in the playoffs, and also believe that goaltending coach Ian Clark can help Holtby get back to his former self.

"Ian is excellent at what he does," said Benning. "Every goalie that we've ever given him, from the start of the year to the end of the year, you see how much they improve, including Jacob Markstrom."

They could use a little more depth. After Demko, the Canucks have Michael DiPietro as their top prospect, who will start for the Utica Comets whenever their season begins. After him, however, there's just Jake Kielly, who needs a new contract, Arturs Silovs in junior, and the unsigned Matthew Thiessen in the NCAA. Another veteran netminder with some NHL experience to backup DiPietro in the AHL would be nice to add.

Looking just at the players on the Canucks roster as listed above, let's take stock of the Canucks' cap situation.

Gaudette and Virtanen will take up some of that cap space. Evolving Hockey projects two-year deals for both, worth $1.365 million for Gaudette and $2.918 million for Virtanen. If we assume those projections are accurate, that leaves the Canucks with $6,451,788 in cap space to sign a top-six winger and a top-four defenceman.

There are some wild cards involved. Ferland intends to return next season, but if he goes on Long-Term Injured Reserve, that would give the Canucks some more flexibility. The Canucks can't count on that happening, though there are always injuries of some sort in training camp and the preseason.

Also, if the Canucks add another forward, they're unlikely to carry 15 forwards on the roster and will need to waive or trade a forward. That will clear a small amount of room under the cap as well, though some of that space would likely be taken up by a 7th defenceman on an entry-level contract.

It's not a dire situation, but it is one that will be difficult to navigate, particularly if the Canucks truly want to improve heading into next season. Shoring up the defence with a new goaltender in town should be a priority, but can the Canucks fit a true difference-maker on defence in their current cap situation?

The Canucks aren't done. There is plenty of time before the start of next season for Benning to tinker with the roster and he's likely to be very busy in the coming days.

"I think this free agency period, it's not going to be like in years past, where it's a five or six-hour deal and it was all over," said Benning. "This could be three or four days, even a week we could be doing business in this free agency. I've had a lot of calls like this afternoon on trades, where maybe teams weren't in on free agency but they're looking to make a trade so we're going to keep all options open."

REPORT: Tyler Toffoli will head to free agency due to Canucks’ cap crunch
Oct 6, 2020 1:08 PM
Comments
We welcome your feedback and encourage you to share your thoughts. We ask that you be respectful of others and their points of view, refrain from personal attacks and stay on topic. To learn about our commenting policies and how we moderate, please read our Community Guidelines.