Canada ranks among most miserable countries in the world

How have you felt over the past year?

While a recent study found that Vancouver is among the happiest cities in the world, another one finds that Canadians have been pretty miserable over the course of the COVID-19 pandemic.

This week, Vancouver Is Awesome shared a story about a ranking that included our city in its roundup of the top 12 happiest cities worldwide. Vancouver came 11th, with Toronto following in 12th.

Of course, not everyone agreed with the ranking. While multiple readers say they love living in the city, numerous others found the ranking laughable. Some people mentioned the housing crisis as one of the main reasons why Vancouverites can't possibly be so "happy," while others pointed to the vast number of people who feel depressed living in the city.

Now the Macdonald-Laurier Institute has released a “COVID Misery Index," which compares the performance of 15 similar nations in protecting the health and prosperity of their citizens during the pandemic. Those with higher scores have felt more misery, including from the spread of sickness and death from the disease itself, slow or poor responses by government, and economic decline.

Canada took the number 11 spot out of the 15 countries measured, which report authors note indicates a "relatively poor performance in terms of reducing the misery of the pandemic.

"Relative to its peers, Canada gets a 'C' in terms of its overall performance." 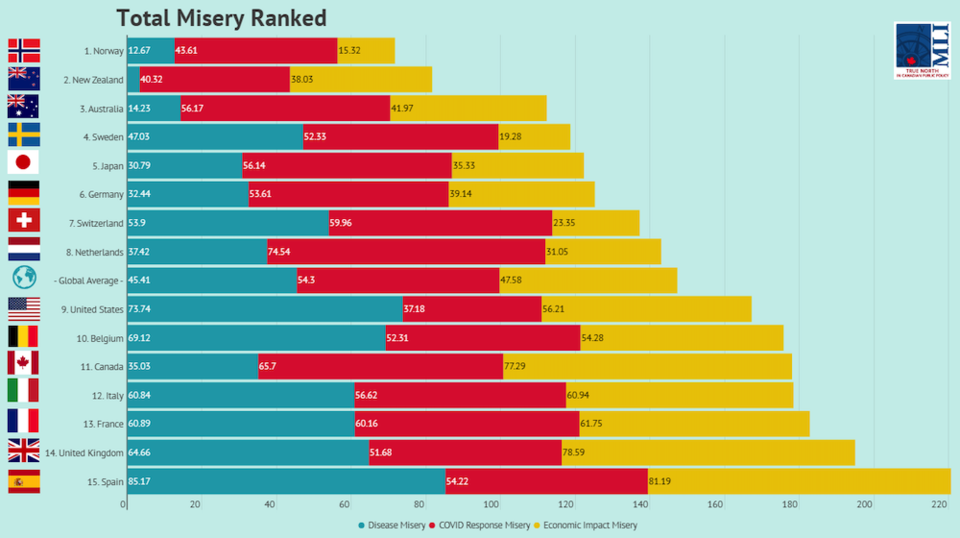 The ranking is based on data from across three main categories that capture the disease impact, management response, and economic impact of each nation by measuring performance on 16 key metrics. Measures include the number of infections, COVID-related deaths, lockdown stringency, vaccination rates, testing capacity, changes in GDP, unemployment, public debt, and more.

The news is not all bad for Canada, however: "When it comes to limiting disease misery, the country places sixth out of 15 countries measured, receiving a 'B' in this category, including the spread of cases and deaths."

But in terms of misery caused by government response to the pandemic, Canada ranked 14th out of 15 or a “D” letter-grade--only the Netherlands had a worse response performance.

And while Canada ranked 13th in economic performance, the COVID Misery Index suggests that this "country’s inefficient approach to the virus was more costly than in other countries." Canada's poor economic result was given another “D” and is "the single greatest contributor to overall misery in Canada."

“While Canada was spared the worst ravages of the disease, our response to it has brought significant misery, largely attributable to quite strong restrictions in behaviour and a lagging vaccination program,” writes Audas. “The economic misery has been severe, and the projections are that Canadian taxpayers will be paying this bill for some time to come.”

In contrast to Canada, Norway had the best overall performance according to the COVID Misery Index. "By combatting the virus efficiently, Norway succeeded in protecting the health and overall wellbeing of its citizens."

Report authors add that the Scandinavian country also topped the list of countries in terms of economic performance.