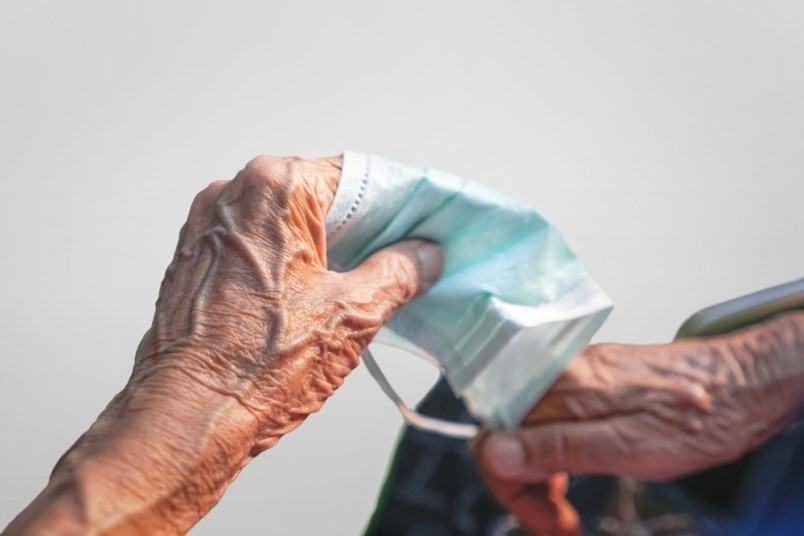 An SFU researcher is calling on all levels of government — including municipalities — to make masks mandatory in Metro Vancouver. Photo: Getty Images

A health sciences researcher working on public health messaging is calling on officials across the Lower Mainland to implement a mandatory mask policy across Metro Vancouver as cases of the novel coronavirus (COVID-19) continue to surge across the region.

As a professor in the Health Sciences department at Simon Fraser University, Scott Lear has been researching how populations respond to public health measures since the COVID-19 pandemic began.

“Vancouver and Surrey and the surrounding municipalities are the only major cities in Canada that don’t have a mask mandate,” said Lear. “We’re an outlier.”

In response, Lear launched an online petition addressed to Health Minister Adrian Dix and provincial health officer Dr. Bonnie Henry calling for a mandatory mask policy across the Metro area. By Tuesday, it had been signed by over 3,200 people.

Lear points to an increasing body of research indicating mask mandates lead to more people wearing masks more often, despite early concerns around what’s known as “risk compensation.” Early in the pandemic, health officials, including Lear, were worried that mandatory masks would lead people to feel a sense of complacency around other measures like social distancing.

Lear says the evidence for risk compensation in the context of the coronavirus pandemic has not been backed by the cumulative body of research, and he’s concerned the benefits of a Metro Vancouver mandatory mask policy are not being fully realized at a time virus cases are soaring across the region.

Lear has been advocating for a mandatory ban for several weeks, ever since a Vancouver city councillor tabled a motion to mandate masks in city-owned facilities. At the time, Vancouver Coastal Health medical health officer Dr. Patricia Daly answered the motion in a letter strongly opposing any mandate.

In an Oct. 23 opinion piece in the Province, Lear refuted several of Dr. Daly’s objections, including that cost could be prohibitive for some (it’s worth the public expenditure), that those with medical conditions would be unfairly burdened (they would be exempt) and that a relatively low rate of COVID-19 infection does not justify such a measure (there were nearly 1,000 new cases over the weekend, mostly in the Lower Mainland).

Lear said he’s not seeking a widely enforced mandatory mask policy, arguing that just having the law on municipal books — and he’s most hopeful municipalities will pick up the mantle — would lead to wider adoption of mask use.

“Mask mandates are unlikely to change people with extreme views. But that’s a minority of people,” he said. “There’s a group between those extremes… Those people on the fence saying, ‘masks are good, but they’re not crucial.’”

Lear said there should also be obvious exemptions when people are eating or drinking in a restaurant.

Such a mandate would also help alleviate pressure on small businesses, whose policy may differ from that of a neighbouring store, said Lear.

“It makes it challenging if there’s no higher authority to say there’s no mandate there. Then it becomes the owner versus that customer and the business next door that doesn’t require them,” he said.

“These inconsistencies create confusion and that wedge to argue over.”

Lear also cites TransLink’s success with its mandatory mask mandate, which does not apply to small children or people with medical pre-conditions that would make it difficult or impossible to wear a mask. After rolling out its mandatory mask policy, mask use jumped from 40% to 92% by early September, according to the regional transit authority.

“Even when it’s not enforceable, the mask mandate on TransLink has resulted in greater mask use,” he said.

Or as the health science researcher put it in his petition: “Mask mandates = more mask use = less cases = less restrictions, job losses, hospitalizations and deaths.”